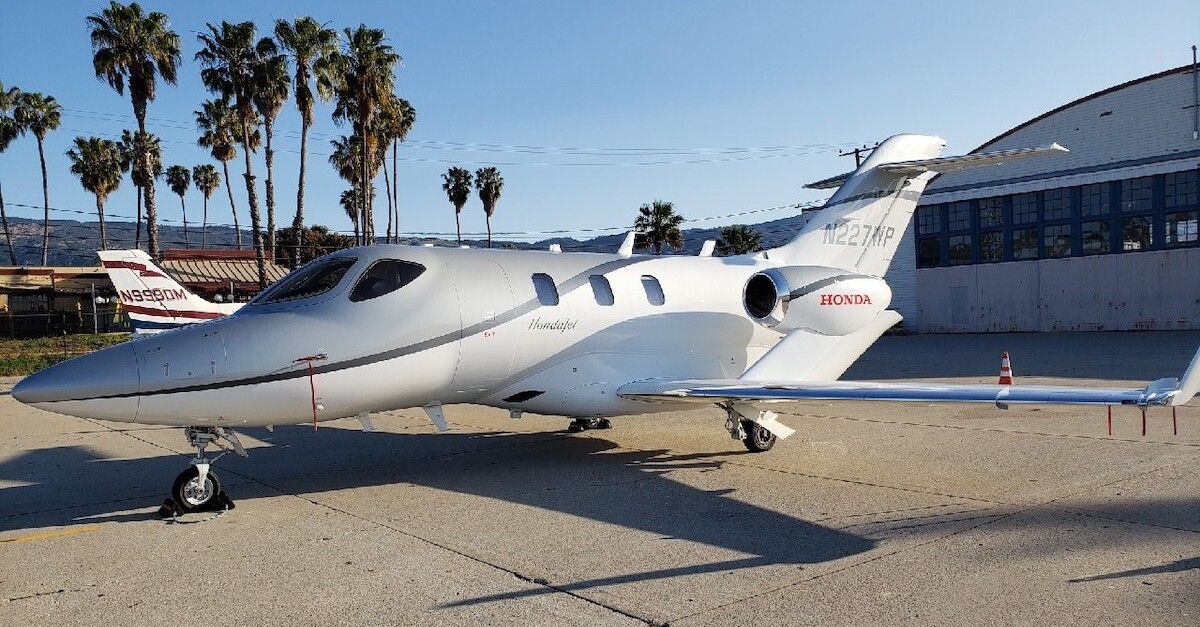 This jet was seized by federal agents shortly after Michael Avenatti’s arrest in 2019. (U.S. Department of Justice photo)

A forfeiture application filed in the Central District of California Monday afternoon said Avenatti tried to relinquish his interest in the $4.5 million Honda HA-420 aircraft last month in a separate forfeiture case but was unable to file a notice as required.

Prosecutors attached the notice as an exhibit, noting that Avenatti states in it that he “does not object” to the court entering a forfeiture order. It states that he “expressly, freely and voluntarily forfeits all right, title, and interest” in the jet.

The filing from Assistant U.S. Attorney Dan G. Boyle of the forfeiture unit in Los Angeles observes that Avenatti admitted in his guilty pleas that he’d embezzled $2.5 million from “Client 2” and transferred it to another law firm.

“As alleged in the Indictment, one such execution of this scheme was the embezzlement of funds from ‘Client 2,’ and specifically, that defendant “caused $2,500,000 of [Client 2’s] $2,750,000 settlement payment to be transferred to an attorney trust account for another law firm,” prosecutors wrote in their application. “That same day, defendant Avenatti caused Law Firm 1 to transfer the entire $2,500,000 to Honda Aircraft Company, LLC, to purchase a private airplane for defendant Avenatti’s company, Passport 420.”

As detailed in testimony before last summer’s mistrial, that law firm was the X-Law Group, which was controlled by Avenatti’s former law associate Filippo Marchino, and Marchino used the money to purchase the jet for Avenatti’s company Passport 420. Client 2 is Alexis Gardner, whom Avenatti represented in a mediation against her former boyfriend, professional basketball player Hassan Whiteside, and was one of five clients who testified against Avenatti.

The origins of Passport 420 hint at the competing ownership claims surrounding the jet, which could complicate prosecutors’ forfeiture request. Avenatti formed the LLC as a marijuana venture with backing from William Parrish, a wealthy client for whom Avenatti had helped secure a $39 million settlement in 2011.

Avenatti was representing Parrish and his friend and business partner Timothy Fitzgibbons in an ongoing lawsuit from his former co-counsel Robert Stoll over $5.4 million, but they fired him in 2018 amid his sudden national prominence and their own questions about his truthfulness regarding a client trust account he said contained the $5.4 million.

In one email from May 2018, Fitzgibbons cited “the recent Los Angeles Times articles about you,” requested proof of the trust account and quoted Ronald Reagan, “Trust but verify.”

As established in an Orange County Superior Court trial that ended in June, Avenatti had spent Stoll’s $5.4 million attorney fee shortly after receiving it, mostly on personal expenses, including a donation to his alma mater, George Washington University Law School. A jury rejected Stoll’s claims against Fitzgibbons and Parrish, and a judge is to enter a $20 million judgment against Avenatti by Aug. 16, Stoll’s lawyer H. James Keathley told Law&Crime in a recent email.

Parrish co-owned the jet with Avenatti, and he’s described to a reporter how he was at the plane’s hangar in Santa Barbara County shortly after Avenatti’s arrest in 2019 when federal agents arrived to seize it. However, his lawyer Chris Wesierski told Law&Crime in an email Monday that he won’t be contesting the government’s proposed forfeiture order.

Others still could, though. Starr Indemnity & Liability Co., the company through which Parrish and Avenatti insured the jet, is suing the men over its federal seizure, saying it never would have insured the jet if they’d known Avenatti had paid for part of the jet with stolen money or that the money that paid for the policies was obtained through Avenatti’s bankruptcy fraud.

Gardner has a crossclaim that says Avenatti was running his law firm “unbeknownst to everyone…as a legitimate law firm and a means to enrich himself through criminal activity.” It says the current value of the jet “is about the same as Gardner’s compensatory damages and Gardner should be awarded a 100% ownership interest in the Subject Aircraft.”

Assigned to U.S. District Judge David O. Carter, the case has been on hold pending the resolution of Avenatti’s criminal cases. Gardner is represented by Marchino, who testified as a prosecution witness in Avenatti’s trial but also is accused in separate proceedings in U.S. Bankruptcy Court of conspiring with Avenatti to hide assets.

Monday’s filing is the first look at what prosecutors will be asking of Senior U.S. District Judge James V. Selna as he sentences Avenatti, which is scheduled for Oct. 3 at 9 a.m. at the Ronald Reagan Federal Building and Courthouse in Santa Ana.

Avenatti said at his plea hearing that he disagrees with prosecutors’ assertion that the total amount of money associated with his fraud scheme is $9 million, with another $5 million linked to his tax crime, so the looming sentencing memoranda are expected to address that argument.

Avenatti pleaded guilty on June 16 to four felony wire fraud counts and a felony tax charge after he said plea negotiations over his 36-count indictment had failed. Prosecutors say they’ll dismiss his other six wire fraud counts, but their dismissal of his remaining tax and bankruptcy charges depends on Selna imposing a sentence they believe appropriately addresses the scope of Avenatti’s crimes, which could be about 10 years.

Avenatti is at the Terminal Island federal prison near Long Beach, California, serving sentences out of the Southern District of New York for extorting Nike and defrauding his former client Stormy Daniels.

Read the full forfeiture filing from prosecutors, below.