A North Carolina district attorney has ruled the police shooting of Andrew Brown, Jr., legally justified. Brown, a 42-year-old from Elizabeth City, N.C., was gunned down by three deputies who fired upon him as he attempted to drive away from officers who rode up to his home in the back of a police pickup truck on Wednesday, April 21, 2021, to execute search and arrest warrants.

District Attorney Andrew Womble of the state’s First Judicial District, a group of seven counties prosecuted under a single office, said Brown ignored commands to stop and drove his car straight toward one of the officers. Gunfire erupted as that officer got out of the way and as Brown headed toward other officers stationed on a nearby street.

Watch the short clips of the body camera footage as released by the prosecutor in the player above. 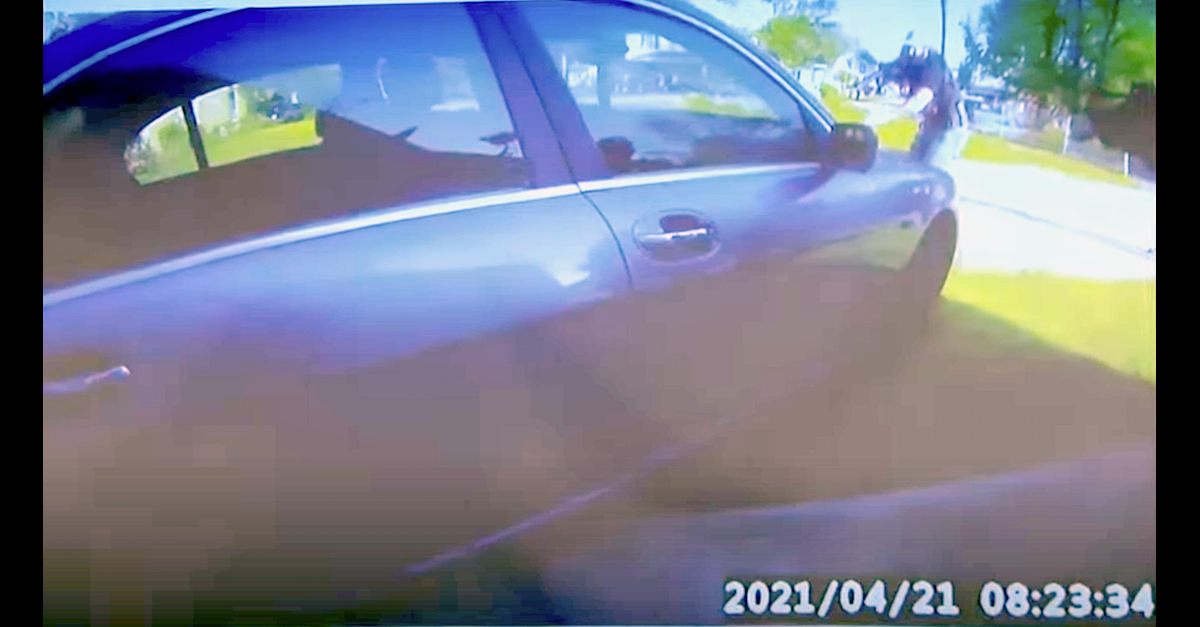 This screengrab from an officer’s body camera video shows the moment when prosecutors say the first shot was fired at Andrew Brown, Jr.

Womble said Brown’s own actions led to the shooting.

“After reviewing the investigation conducted by the North Carolina State Bureau of Investigation, Mr. Brown’s death, while tragic, was justified because Mr. Brown’s actions caused three deputies with the Pasquotank County Sheriff’s Office to reasonably believe it was necessary to use deadly force to protect themselves and others,” Womble said at a news conference Tuesday morning.

While the officer-involved shooting that resulted in the death of Andrew Brown occurred on Wednesday, April 21, law enforcement involvement with Mr. Brown began in the weeks prior and put the wheels in motion that eventually led to the attempted service of arrest and search warrants on April 21, 2021. In the early months of this year, Detective Johnson with the Dare County Sheriff’s Office received information from a reliable confidential source that Andrew Brown from Elizabeth City was selling drugs in Dare County. Detective Johnson contacted Pasquotank County and confirmed Mr. Brown’s identity and that he is a known drug dealer. Upon learning this information, Detective Johnson, along with the aid of the confidential informer, made two undercover buys from Brown on March 17, 2021 and March 29, 2021. Those buys were of cocaine and heroin respectively. A later SBI lab analysis determined that the heroin was laced with fentanyl. Subsequently, arrest warrants were issued for Brown’s arrest on April 20, 2021. Simultaneous with the activity of the Dare Co. Sheriff’s Office, Pasquotank County Sheriff’s Office began collecting their own intelligence on the drug activity of Mr. Brown at his residence at 421 Perry Street.

Sheriff’s deputies applied for and obtained search warrants for Brown’s vehicle and residence, Womble said. A joint team of law enforcement officers could not locate Brown the previous day, so they put off his arrest until April 21.

A narcotics team member spotted Brown at 8 a.m. He remained his vehicle at his home until other officers arrived and attempted to take him into custody via a “clearly marked” county police cruiser.

At 8:23 a.m., Brown was “still sitting in his vehicle beside the residence,” Womble said. A deputy pulled in and attempted to “block any forward motion” by Brown’s vehicle. 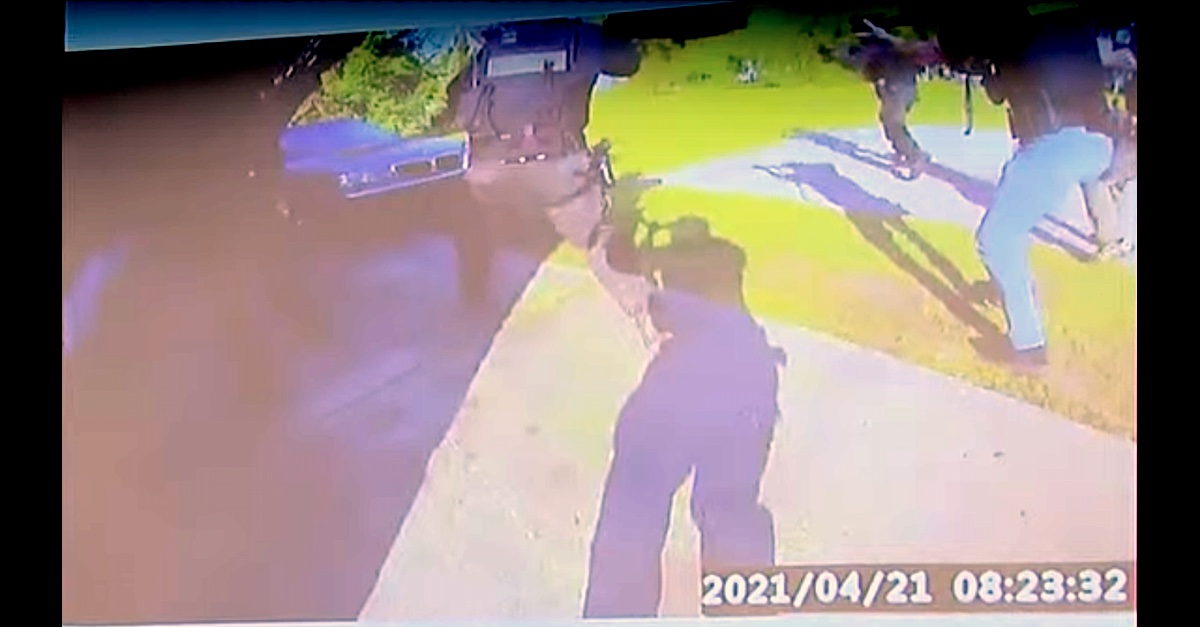 “The six members of the Pasquotank County team” approached “wearing clearly marked” uniforms and gear, Womble said. They “shouted commands” that Brown should show his hands and exit his vehicle. A deputy approached Womble’s vehicle with his weapon drawn and “attempted to open the door” as other officers converged on the vehicle.

“Brown was holding his phone when law enforcement approached,” Womble said while showing images taken from the officer’s body camera videos. “Brown threw the phone down and began to rapidly back his car away from the officers.” 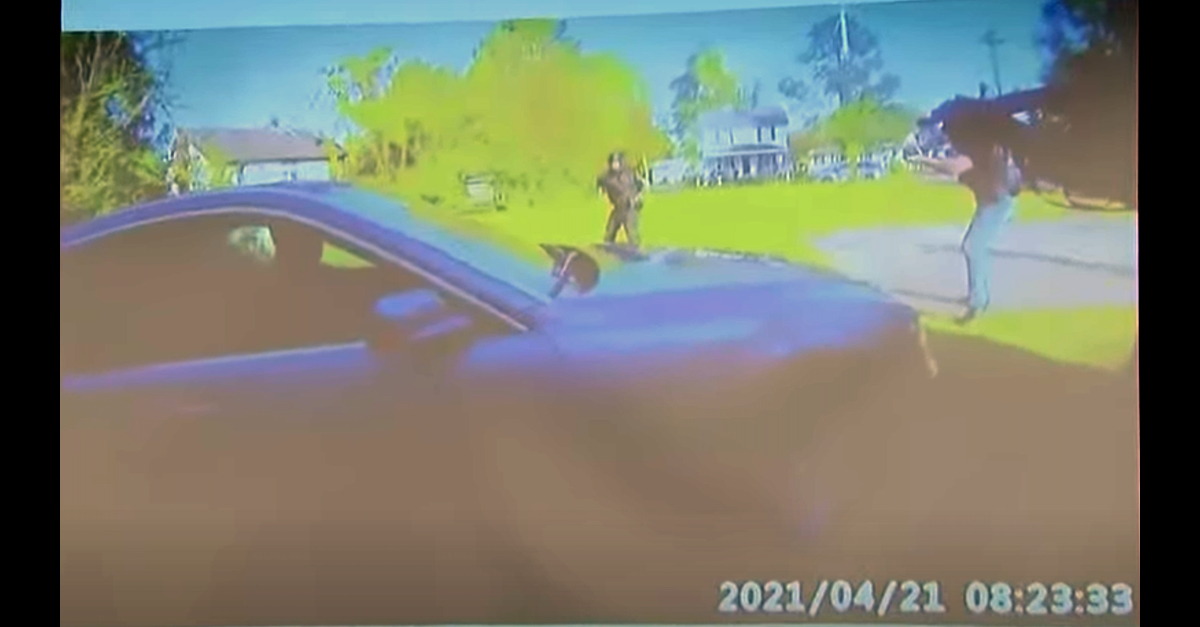 This screengrab from a deputy’s body camera video shows Andrew Brown, Jr., trying to drive away.

According to a state forensic analysis, the first shot was fired into the front windshield of Brown’s car, Womble said. It was previously claimed that the first shots struck the rear of the vehicle. 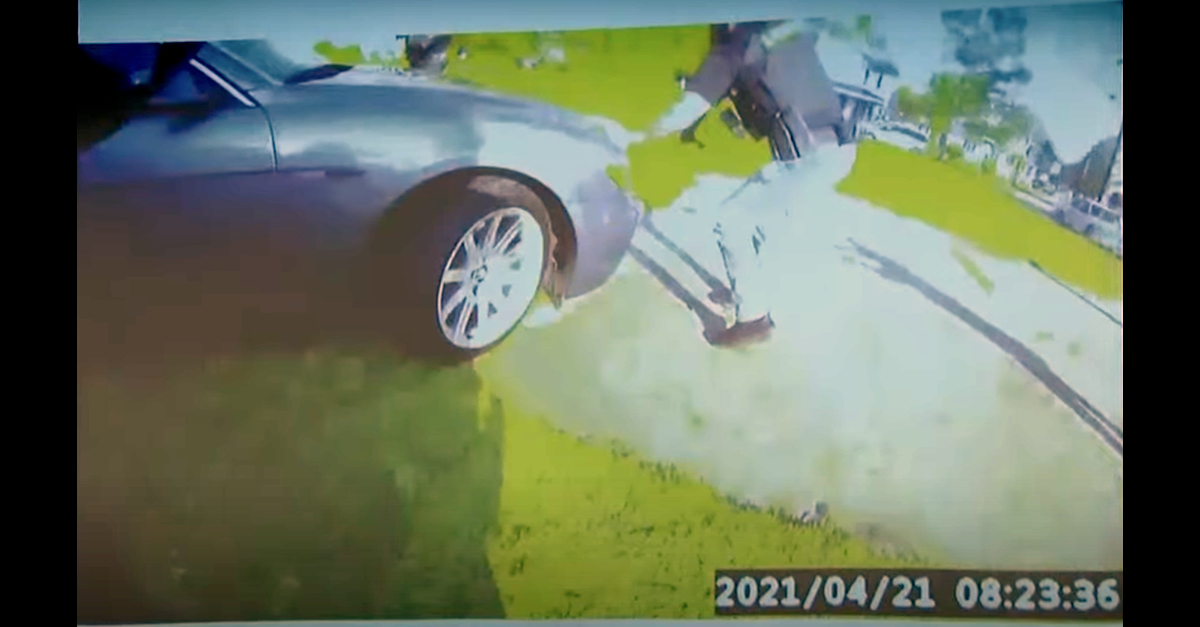 This screengrab from a deputy’s body camera video shows a fellow officer pushing off of the front of Andrew Brown, Jr.’s vehicle in what prosecutors described as an attempt to avoid being struck.

The car continued to move forward, passing some officers and aiming for others, Womble said. Additional shots were fired through Brown’s passenger window (that shot struck Brown’s shoulder), the rear passenger side door and window, he added.

“At this moment, Brown was driving directly at [an investigator] who was positioned on Roanoke Avenue in an unmarked white van,” the prosecutor said. 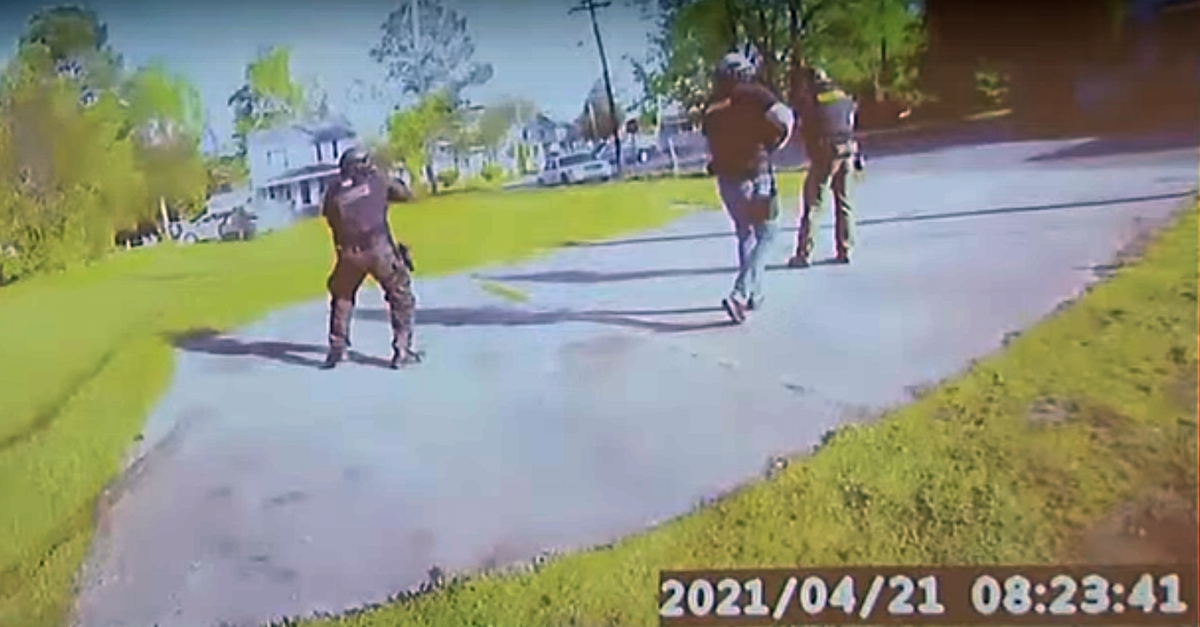 This screengrab from a deputy’s body camera video shows Andrew Brown, Jr. careening toward what prosecutors say is a white law enforcement van.

Another lieutenant was positioned at a nearby corner. The investigator in the van “accelerated to avoid the collision;” Brown “narrowly” missed him, according to Womble.

Brown struck a tree at a residence. Lifesaving efforts began but were unsuccessful.

The entire episode lasted 44 seconds from the time officers first exited their vehicles from the time Brown was removed from his vehicle, Womble said. 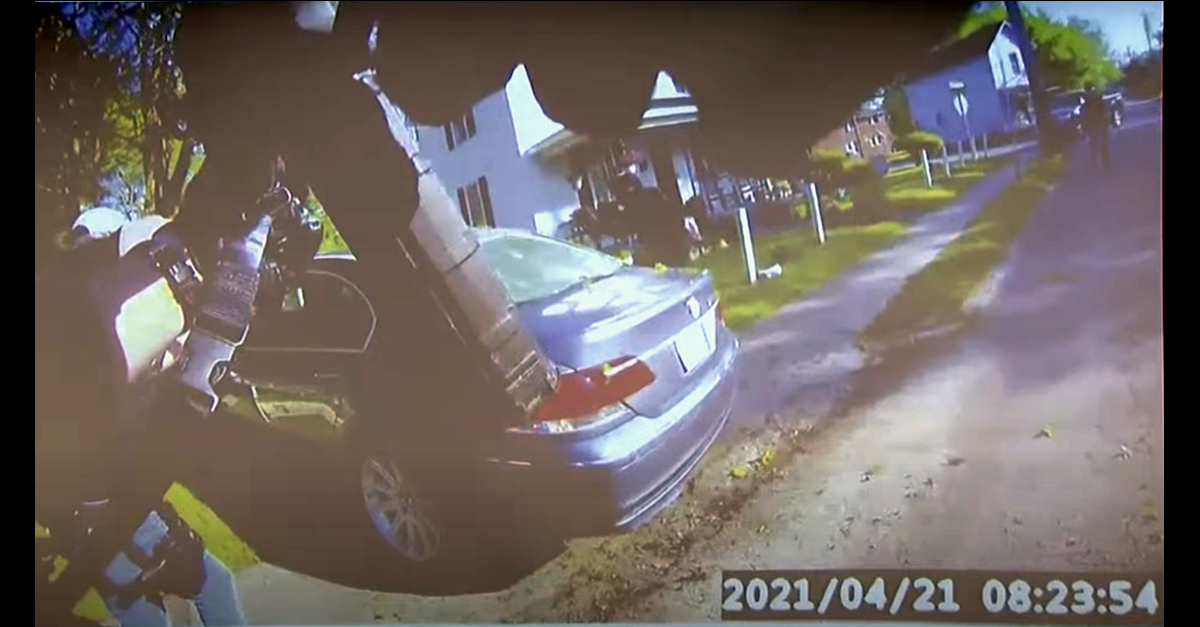 This screengrab from a deputy’s body camera video shows Andrew Brown Jr.’s car where it came to rest.

The prosecutor suggested several witnesses provided statements that did not align with the body camera footage. Brown’s girlfriend told authorities Brown told her the night before the shooting that he believed the police were following him and that he was planning to begin staying at a hotel.

Fourteen spent shell casings were on the scene. Nine were from two of the officers’ Glock handguns and five were from a police AR-15 rifle, Womble said.

An autopsy indicated that Brown was struck twice, Womble said. “One to the right shoulder, upper arm, that was nonlethal, and a second wound to the back of the head at the base of the skull near the hairline.”

An autopsy found that Brown had a 50-cent-piece-sized piece of what is believed to be crystal meth inside his mouth when he died. Womble said the suspected drugs were “too large to swallow.”

Womble noted that North Carolina law allows officers to use force while making arrests. He said the law comports with U.S. Supreme Court and other case law. The statute Womble cited reads, in part, as follows:

A law-enforcement officer is justified in using deadly physical force upon another person . . . only when it is or appears to be reasonably necessary thereby:

a.  To defend himself or a third person from what he reasonably believes to be the use or imminent use of deadly physical force;

b.  To effect an arrest or to prevent the escape from custody of a person who he reasonably believes is attempting to escape by means of a deadly weapon, or who by his conduct or any other means indicates that he presents an imminent threat of death or serious physical injury to others unless apprehended without delay; or

c.  To prevent the escape of a person from custody imposed upon him as a result of conviction for a felony.

Womble said that the law required him to view the scene from the “shoes” of the officers “on the scene” — not through hindsight. 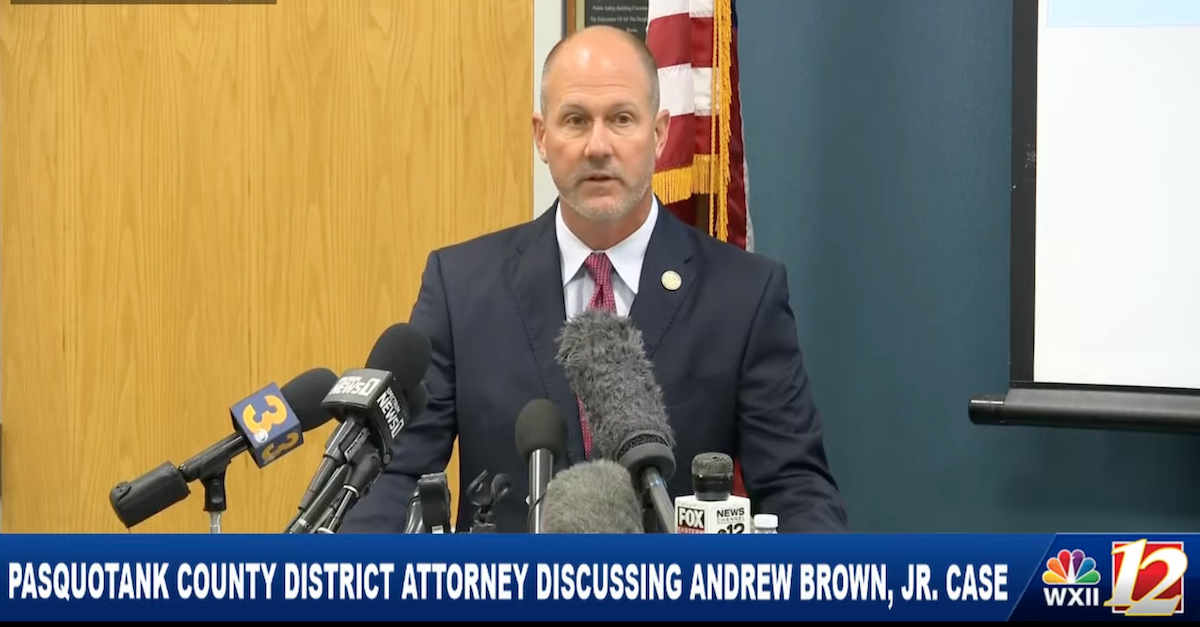 “I find that the facts of this case clearly illustrate that the officers who used deadly force on Andrew Brown, Jr., did so reasonably and only when a violent felon used a deadly weapon to place their lives in danger,” Womble concluded. “Andrew Brown, Jr. was being served with two felony arrest warrants and a search warrant. The law enforcement officers were duty bound to stand their ground, carry through on the performance of their duties, and take Andrew Brown into custody. They could not simply let him go as has been suggested.”

Womble said the state’s autopsy found other abrasions on Brown’s body which appeared to have been caused by shrapnel.

Brown’s family and their attorneys have called the shooting an “execution.”

“My dad got executed just by trying to save his own life,” one of Brown’s sons told a reporter from nearby Portsmouth, Va. NBC affiliate WAVY-TV in late April after privately seeing some of the body camera footage. “The officers were not in no harm of him at all. It’s just messed up how this happened.”

“Lawyers for Brown’s family who watched body camera footage say that it shows Brown was not armed and that he didn’t drive toward deputies or pose a threat to them,” the Associated Press noted. “Separately, the FBI has launched a civil rights probe of the shooting.”

Discounting the thought that Brown was shot while posing a threat to officers stationed elsewhere, high-profile civil rights attorney Ben Crump on April 24 said Brown was “posing no danger to officers” while “allegedly driving away from them.”

[Images of police body camera video are by way of video screengrabs from the Washington Post.  Image of Womble via screengrab from WXII-TV.]