Andrew Brown Jr. Was Shot in Back of Head: Autopsy

Andrew Brown Jr. Was Shot 5 Times, Once in the Back of the Head: Independent Autopsy 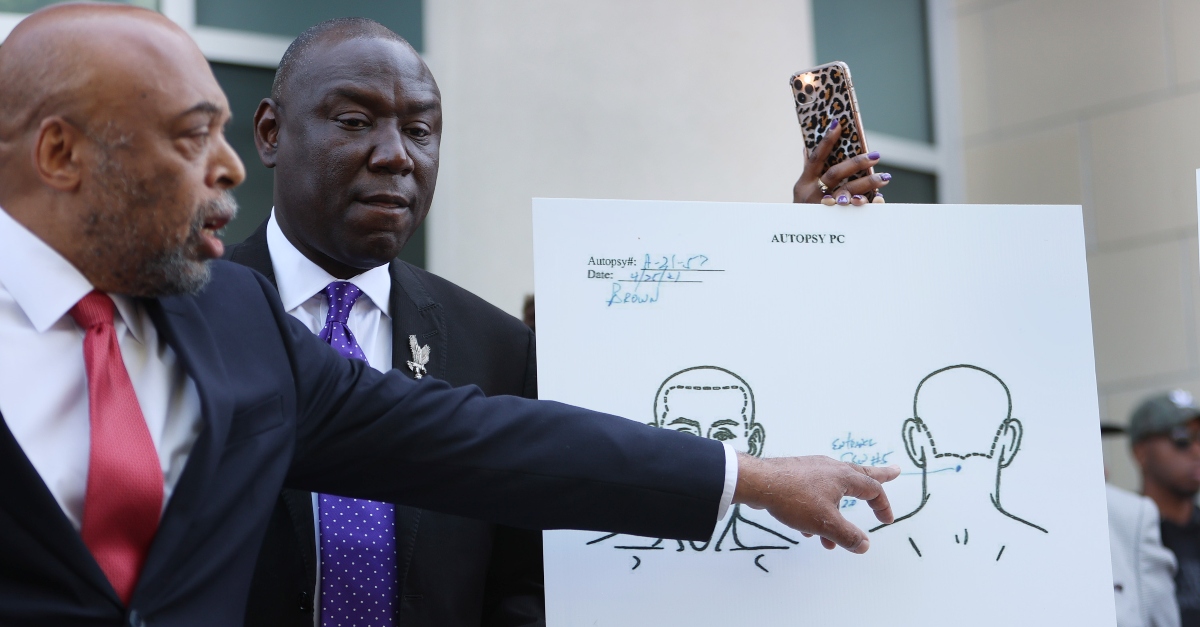 Wayne Kendall (left), and Benjamin Crump, attorneys for the family of Andrew Brown Jr., detail the results of the independent autopsy on Tuesday.

An autopsy commissioned by the family of slain North Carolina man Andrew Brown Jr., 42, found that deputies shot him five times. One of the shots entered the back of his head, according to findings.

Five penetrating bullet wounds including a “kill shot” to the back of the head. That’s the autopsy result being read by the attorneys for Andrew Brown’s family now. They note four non-fatal bullet wounds to Brown’s right arm, followed by a fatal shot to the head.

Brown was shot and killed last Wednesday while Pasquotank County deputies were trying to serve him a drug-related arrest warrant. Officials balked at releasing the video, with Sheriff Tommy Wooten saying that only a judge could do so, and that he would ask for a release after confirming with the North Carolina State Bureau of Investigation that it would not interfere with their investigation.

Attorneys and family of Brown said they were only allowed to see a 20-second snippet of body cam footage of the man’s death. They used the words “execution” and “executed” to describe what happened when deputies opened fire on him while he was in a vehicle.

“He wasn’t reaching for anything,” attorney Chantel Cherry-Lassiter told reporters. “He wasn’t touching anything. He wasn’t throwing anything around.”

Attorneys said authorities continued to open fire as he backed out of the driveway. Brown’s bullet hole-ridden vehicle crashed into a tree, Cherry-Lassiter said.

The Federal Bureau of Investigation announced on Tuesday that it is conducting a civil rights investigation into the shooting death.

“The FBI Charlotte Field Office has opened a federal civil rights investigation into the police involved shooting death of Andrew Brown, Jr,” the agency said in a statement to Law&Crime. “Agents will work closely with the U.S. Attorney’s Office for the Eastern District of North Carolina and the Civil Rights Division at the Department of Justice to determine whether federal laws were violated. As this is an ongoing investigation, we cannot comment further.”

Wooten told CNN that seven deputies ended up on administrative leave; two resigned, and one retired. Wooten added that not all of the ones on leave opened fire, but they were part of the operation.

You can read the autopsy results below: