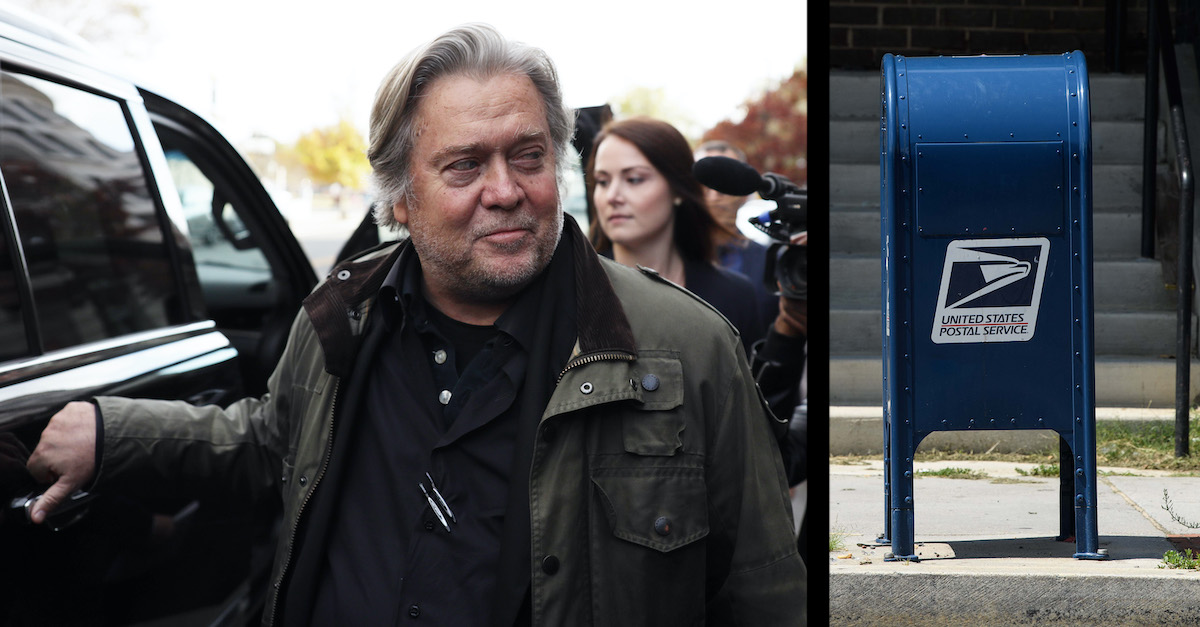 Former Trump 2016 campaign CEO and White House chief strategist Steve Bannon was arrested on a boat off the coast of Westbrook, Connecticut on Thursday morning after being indicted for fraud. The agency that brought him in was the U.S. Postal Inspection Service (USPIS)–the law enforcement arm of the U.S. Postal Service (USPS).

From CBS’ Pat Milton: Steve Bannon was taken into custody today by US Postal Service agents. He’s expected to be arraigned today before a US magistrate. @SDNYnews alleges he had a role in defrauding donors as part of an online crowdfunding campaign known as “We Build the Wall”

Bannon’s indictment unsealing was announced by Inspector-in-Charge of the New York Field Office of the USPIS Philip R. Bartlett, who shared the stage and honors with Acting U.S. Attorney for the Southern District of New York (SDNY) Audrey Strauss.

“We thank the USPIS for their partnership in investigating this case, and we remain dedicated to rooting out and prosecuting fraud wherever we find it,” Strauss said in a statement which also praised the little-known agency’s “outstanding investigative work,” suggesting the USPIS was instrumental in the investigation.

The USPS itself–the parent agency of the USPIS–has been the subject of controversy as of late after postal employees and union representatives rang tocsins of alarm about mail sorting machines being removed without explanation. Reports suggest that close to 1,000 mail sorting machines have been decommissioned on the order of Postmaster General Louis DeJoy in recent months.

An appointee of, and former mega-donor to, President Donald Trump, DeJoy has long been open about his efforts to force the revered agency into a revamp of its “organizational structure,” saying he planned to go forward with previously bi-partisan neoliberal reforms–despite small pockets of opposition–in a recent memo.

Once the news broke about the mail sorting machines being taken out of service, however, those small pockets of opposition–initially led by Sen. Bernie Sanders (I-Vt.)–grew into an uproar; protecting the USPS became a cause célèbre once the connection was made between diminished mail services and Trump’s legal push against universal mail-in voting.

DeJoy issued a rare statement earlier this week telegraphing a volte-face within his agency–and promising that further “operational initiatives” would cease until after the 2020 election.

“To avoid even the appearance of any impact on election mail, I am suspending these initiatives until after the election is concluded,” the postmaster general said–in an apparent attempt to mollify critics.

That didn’t quite work. Lawsuits have continued to be filed apace against the changes–some alleging that DeJoy violated the U.S. Constitution by attempting to interfere with the right to vote.

Against this backdrop, pundits and social media users lit up with glee at the USPS role in apprehending and investigation Trump’s former campaign guru.

NEITHER SNOW NOR RAIN NOR HEAT NOR GLOOM OF NIGHT STAYS THESE COURIERS FROM THE SWIFT COMPLETION OF THEIR APPOINTED ROUNDS https://t.co/bTbTFfgQ7H

Thank you for your service, @USPS https://t.co/CVMfbcj04I

Yes, the US Postal Service just arrested Steve Bannon. I congratulate this season’s writers room for a twist so damn imaginative. https://t.co/w0CPV8QbtA

This show is really doing its best to align all the plots https://t.co/kUA1fOwhJA