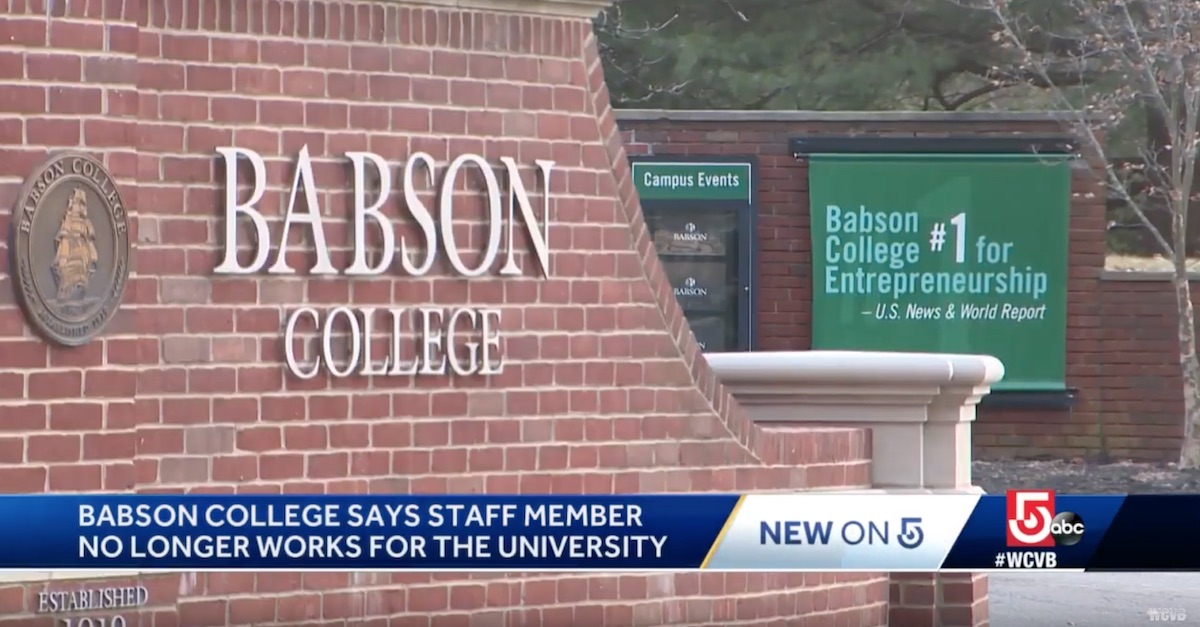 A Babson College Director of Sustainability and former adjunct lecturer was canned by his employer after a swift investigation into a Facebook post that he says was a “bad attempt at humor” and those advocating for him say was obviously not a serious threat or incitement.

Asheen Phansey said that Iran’s supreme leader “should,” in retaliation, “tweet a list of 52 sites of beloved American cultural heritage that he would bomb.” The two sites he named? The Mall of America and a Kardashian residence. 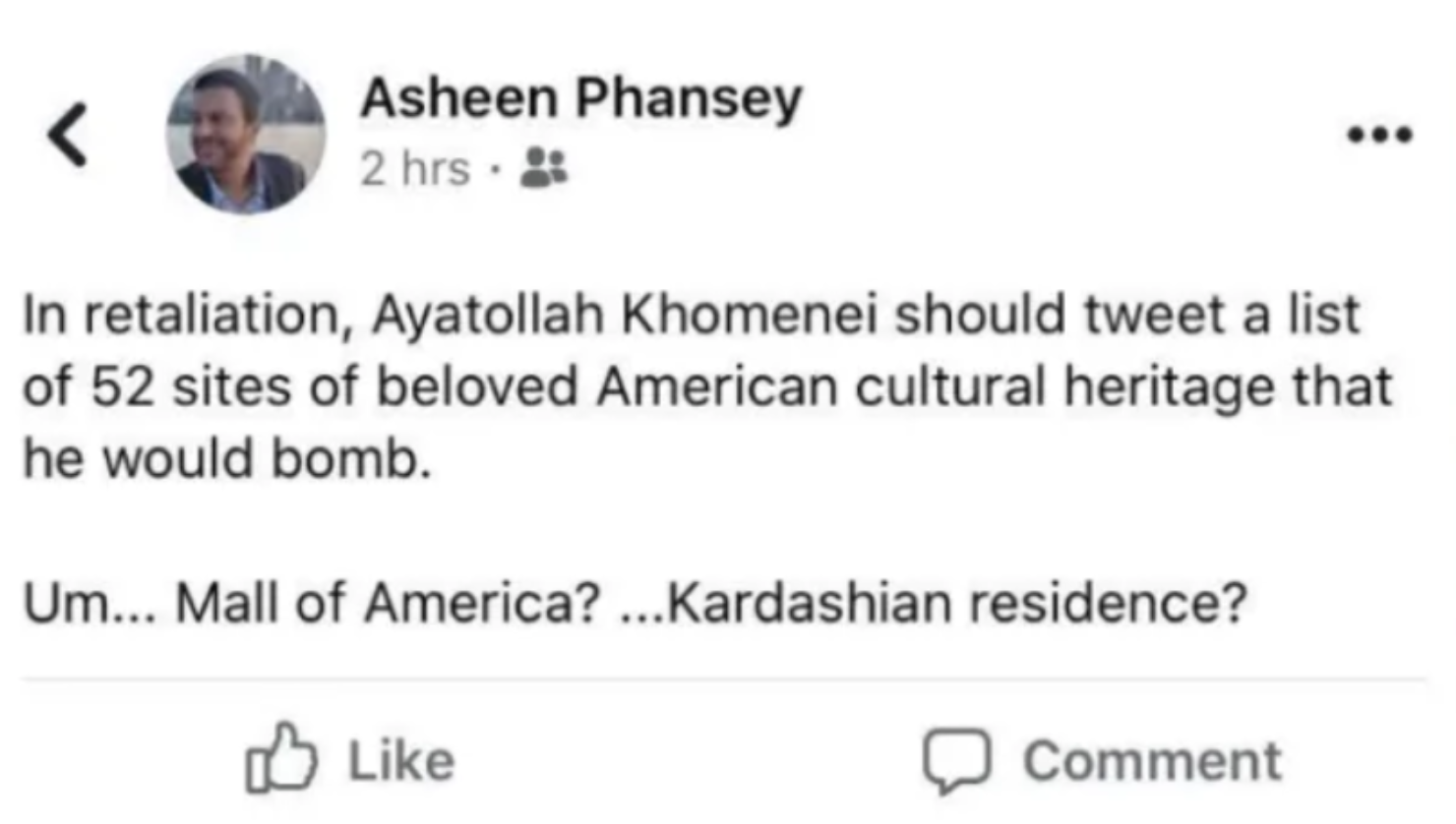 That Phansey named these two sites and not sites of actual cultural significance in America is a pretty clear tell that this wasn’t a serious post. Babson College thought differently. In a statement on Wednesday, the college said it “condemns any type of threatening words and/or actions condoning violence and/or hate.” It announced that Phansey was suspended pending the outcome of the investigation.

“While we understand he has deleted the posts, we have immediately suspended him, with pay, pending the completion of our investigation. In addition, we are cooperating with local, state and federal authorities,” the statement said.

The next day, the college issued another statement, saying that a “thorough investigation” had concluded and that Phansey was out of a job.

President Donald Trump ratcheted up the rhetoric last Saturday when he tweeted that, “Let this serve as a WARNING that if Iran strikes any Americans, or American assets, we have targeted 52 Iranian sites (representing the 52 American hostages taken by Iran many years ago), some at a very high level & important to Iran & the Iranian culture, and those targets, and Iran itself, WILL BE HIT VERY FAST AND VERY HARD. The USA wants no more threats!”

The clause “important to Iran & the Iranian culture” immediately set off alarm bells, as targeting sites of cultural property is a war crime, per Protocol I of the Geneva Conventions. Days after the outcry, the president walked back those comments.

“They are allowed to kill our people. They are allowed to maim our people, they’re allowed to blow up everything that we have and there’s nothing to stop them,” he said on Tuesday. “We are, according to various laws, supposed to be very careful with their cultural heritage. And you know what if that’s what the law is, I like to obey the law.”

Phansey said Thursday that he was “disappointed” his long relationship with the college was over because “people willfully misinterpreted a joke I made to my friends on Facebook.”

“I am disappointed and saddened that Babson has decided to abruptly terminate my 15-year relationship with the college just because people willfully misinterpreted a joke I made to my friends on Facebook,” he said, according to CBS Boston. “I would have hoped that Babson, an institution of higher education that I love and to which I have given a great deal, would have defended and supported my right to free speech. Beyond my own situation, I am really concerned about what this portends for our ability as Americans to engage in political discourse without presuming the worst about each other.”

The ousted staff member, who in the past taught a course at the college, said Wednesday through an attorney that he was “sorry that my sloppy humor was read as a threat.”

Adjunct lecturers are included in the faculty profiles section of Babson College’s website, and Phansey was scheduled to teach a course in the coming semester.

The Foundation for Individual Rights in Education (FIRE), a nonpartisan, nonprofit organization whose mission is to “defend and sustain the individual rights of students and faculty members at America’s colleges and universities,” sent a letter to Babson President Dr. Stephen Spinelli Jr. on Thursday. The group said at length that it was “concerned by the threat to freedom of expression” that Phansey’s then-suspension posed. 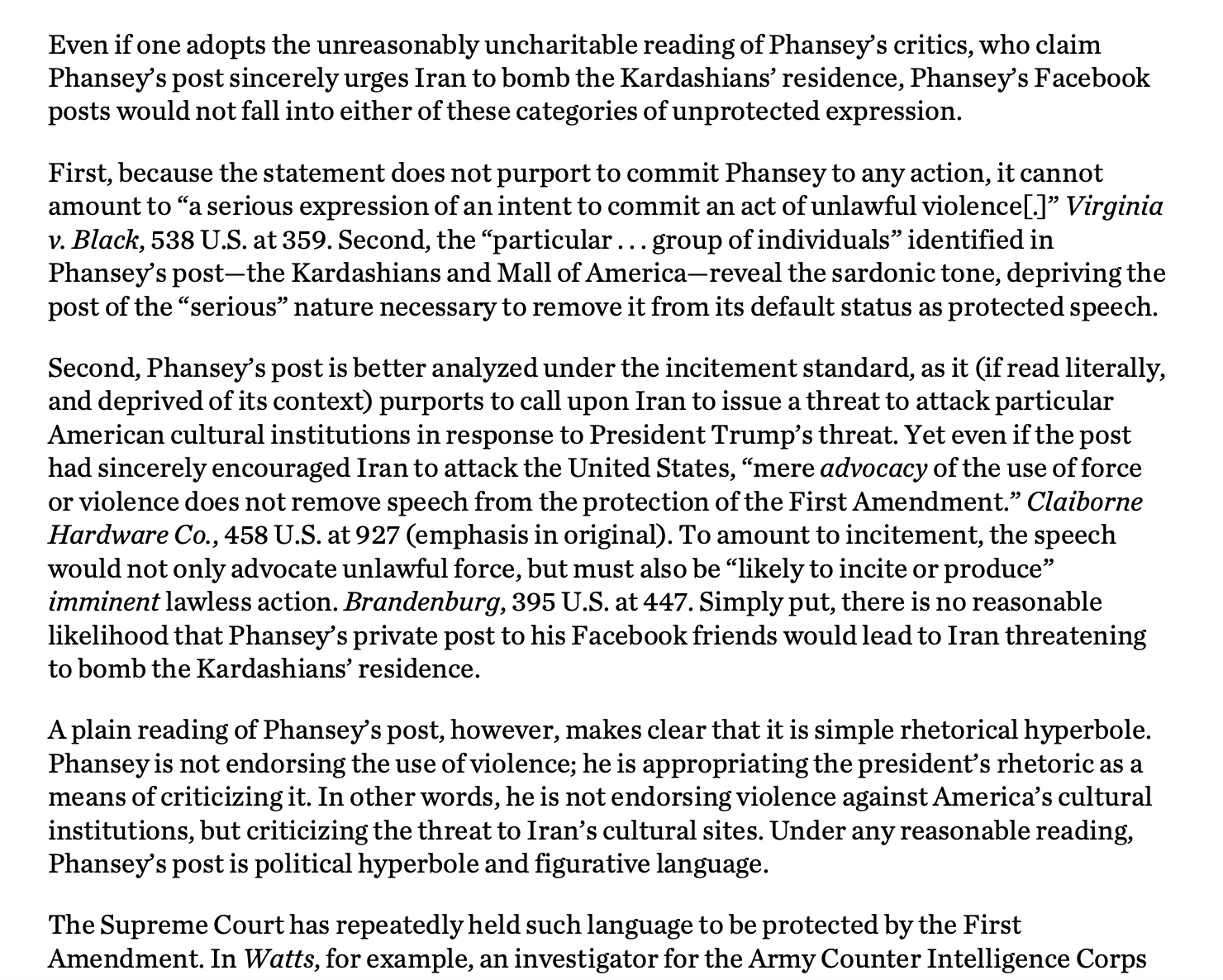 Editor’s note: The headline and article was edited post-publication to reflect that Phansey was not a professor, but a staff member (the Director of Sustainability at Babson College) who formerly taught a course as an adjunct lecturer at the institution. The story also added a line noting that adjunct lecturers are included in the faculty profiles section of Babson College’s website, and that Phansey was scheduled to teach a course in the coming semester.