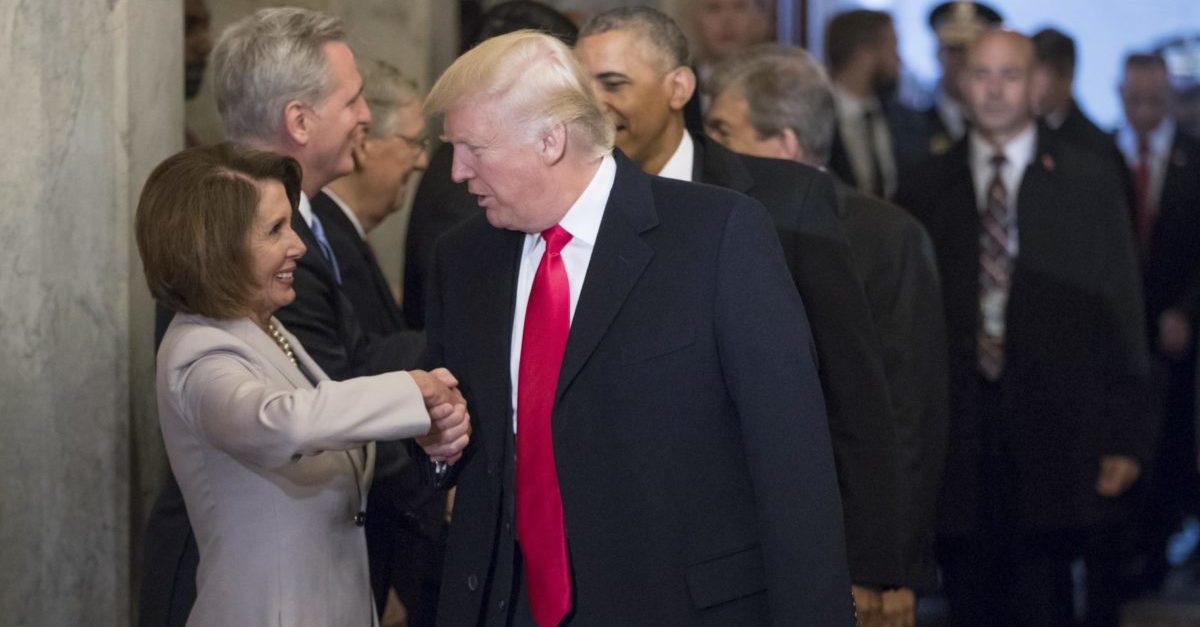 President Donald Trump (possibly) wrote a bizarre and rambling letter to Speaker of the House Nancy Pelosi (D-Calif.) on Tuesday afternoon laying out the executive branch’s view of impeachment ahead of a historic Wednesday vote. It was a missive aimed at most to all of Trump’s nemeses, and it read like a “written version of a Trump rally.”

“The Articles of Impeachment introduced by the House Judiciary Committee are not recognizable under any standard of Constitutional theory, interpretation or jurisprudence,” the president lied right off the bat. Several constitutional theories, interpretations and legal philosophies support the current impeachment process being undertaken the U.S. House of Representatives.

“They include no crimes, no misdemeanors, and no offenses whatsoever,” Trump continued, perhaps intentionally mistaking the fact that impeachment is a constitutional and non-legal remedy which holds that offenses qualify for impeachment based strictly on whatever the sitting Congress determines at any given time.

“By proceeding with your invalid impeachment, you are violating your oaths of office, you are breaking your allegiance to the Constitution, and you are declaring open war on American Democracy,” Trump said. “You dare to invoke the Founding Fathers in pursuit of this election-nullification scheme–yet your spiteful actions display unfettered contempt for America’s founding and your egregious conduct threatens to destroy that which our Founders pledged their very lives to build.”

The president also accused Pelosi of lying about sincerely praying for him:

Even worse than offending the Founding Fathers, you are offending Americans of faith by continually saying “I pray for the President,” when you know this statement is not true, unless it is meant in a negative sense. It is a terrible thing you are doing, but you will have to live with it, not I!

The letter did not stop there.

“Your first claim, ‘Abuse of Power,’ is a completely disingenuous, meritless, and baseless invention of your imagination,” the letter argues before launching into a typical recitation of the 45th president’s oft-repeated claim that his conversations with Ukrainian President Volodymyr Zelensky were on the up-and-up and did not contain any attempt to exact a quid pro quo by leveraging U.S. military aid against an investigation into Joe Biden and Hunter Biden.

Trump went on to attack Biden for the appearance of corruption and quoted the former vice president himself admitting that the intermingling facts of his efforts in the Ukraine and his son’s work there “looked bad.”

“This is not a letter authored by someone of sound mind or in full command of his mental faculties,” said Susan Hennessey, executive editor of the legal blog Lawfare. “The implications of that are obviously immense and quite scary but how long can we really continue to ignore it?”

CNN analyst and former FBI Special Agent Asha Rangappa took the opportunity to share writing advice that mirrors another famous letter–one authored by F. Scott Fitzgerald and sent to his lover Sheilah Graham regarding the use of exclamation points.

“I tell my students when writing papers: Use of exclamation points in making an argument or a formal document makes you look unserious, petulant, and lacking in the ability to make a point based on substance,” Rangappa tweeted. “Just putting that out there for no reason.”

Others called it an “incendiary and dangerous letter, which would not be sent by any responsible person.”

This is an incendiary and dangerous letter, which would not be sent by any responsible person. https://t.co/8AmjaLSLfw

But wait, there’s more. There president’s staggering letter continued on:

The second claim, so-called “Obstruction of Congress,” is preposterous and dangerous. House Democrats are trying to impeach the duly elected President of the United States for asserting Constitutionally based privileges that have been asserted on a bipartisan basis by administrations of both political parties throughout our Nation’s history. Under that standard, every American president would have been impeached many times over.

Trump then went on to cite the opinion of “liberal law professor” Jonathan Turley–the House GOP’s sole witness during the Judiciary Committee phase of impeachment proceedings. During his testimony, Turley criticized House Democrats for responding to White House stonewalling by essentially accusing impeachment investigators of abusing their own power.

At one point, Trump chalked all of this up to TDS.

“You have developed a full-fledged case of what many in the media call Trump Derangement Syndrome and sadly, you will never get over it!” he said.

Congressman Adam Schiff cheated and lied all the way up to the present day, even going so far as to fraudulently make up, out of thin air, my conversation with President Zelensky of Ukraine and read this fantasy language to Congress as though it were said by me. His shameless lies and deceptions, dating all the way back to the Russia Hoax, is [sic] one of the main reasons we are here today.

And there was quite a bit more.

“More due process was afforded to those accused in the Salem Witch Trials,” Trump inaccurately claimed later on.

“This is nothing more than an illegal, partisan attempted coup that will, based on recent sentiment, badly fail at the voting booth,” the letter repeated the falsehood that the impeachment inquiry is illegal (federal judges have recognized it as legitimate). “You are not just after me, as President, you are after the entire Republican Party…History will judge you harshly as you proceed with this impeachment charade. Your legacy will be that of turning the House of Representatives from a revered legislative body into a Star Chamber of partisan persecution.”

“On hundred years from now, when people look back at this affair, I want them to understand it, and learn from it, so that it can never happen to another President again,” Trump concluded. Perhaps it is true that this letter will be read 100 years from now.

“I am pretty sure I had a calmer response to my college girlfriend leaving me for a firefighter than the president just had in his letter to the Speaker,” he said.

Read the full missive below:

Letter From Trump to Pelosi by Law&Crime on Scribd