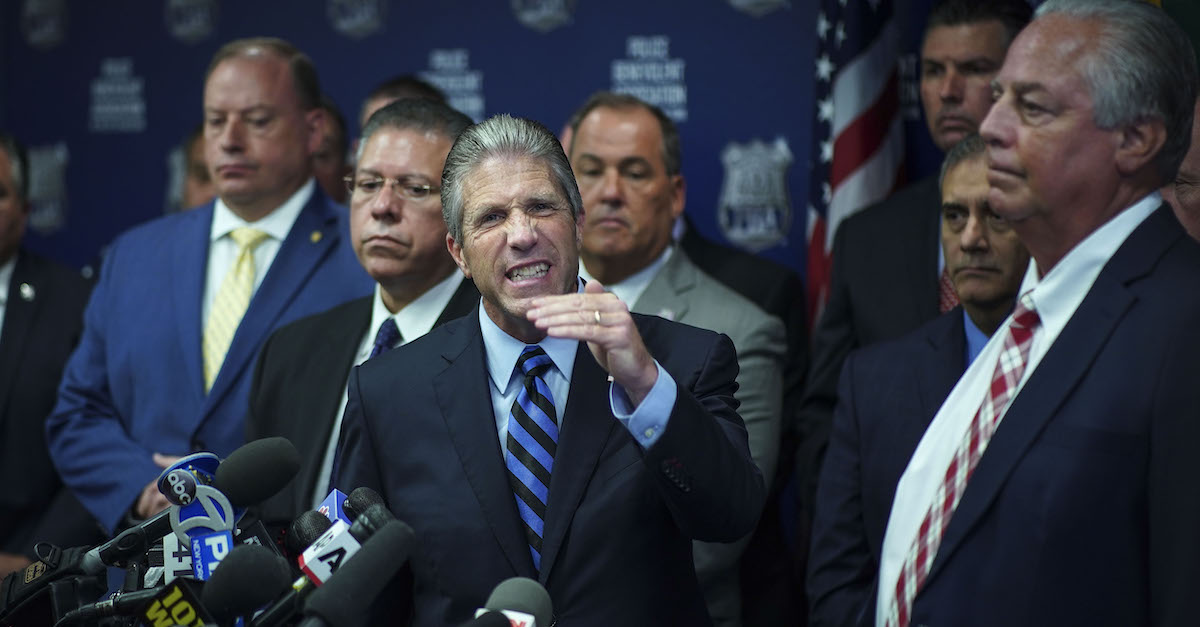 NEW YORK, NY – AUGUST 19: Pat Lynch, president of the NYC Police Benevolent Association, speaks during a press conference after the announcement of the termination of officer Daniel Pantaleo at PBA headquarters on August 19, 2019 in New York City. NYPD Commissioner James O’Neill announced on Monday that Officer Pantaleo has been fired from the NYPD after his involvement in a chokehold related death of Eric Garner in 2014.

The president of the Police Benevolent Association (PBA) in New York City reacted on Monday to the firing of Daniel Pantaleo by accusing Police Commissioner James O’Neill of “cringing in fear” of “anti-police extremists.”

Pantaleo was fired more than five years after he was caught on video using a banned chokehold on 43-year-old Eric Garner — a chokehold that triggered a deadly asthma attack. Garner was suspected of illegally selling cigarettes on July 17, 2014.

When O’Neill announced the firing, he acknowledged that if he was still a cop he would probably be angry about the Pantaleo decision. He made sure to mention repeatedly that the decision was a “difficult” one. O’Neill also said that Garner did not comply with officers’ commands that day and resisted arrest. O’Neill even admitted that “If I had been in Officer Pantaleo’s situation I may have made similar mistakes.” With all of that being said, though, O’Neill said that it was “clear that Daniel Pantaleo can no longer effectively serve as a New York City Police officer.”

NYC PBA president Pat Lynch released a statement slamming O’Neill for firing Pantaleo — even though a medical examiner who performed the Garner autopsy testified that the banned chokehold “would have compromised the neck and would have compromised the airway, making it difficult for [Garner] to breathe,” and even though Administrative Judge Rosemarie Maldonado found Pantaleo was “untruthful” and “self-serving” during the course of the investigation. Maldonado called out Pantaleo for his “glaring dereliction of responsibility that precipitated a tragic outcome” while also saying that the “evidence was insufficient to prove that he did it with the intent of obstructing Mr. Garner’s breathing.” (O’Neill ultimately said that he agreed with Maldonado’s recommendation to fire Pantaleo.)

Lynch did not agree and claimed the Pantaleo firing was a slippery slope.

“Police Commissioner O’Neill has made his choice: he has chosen politics and his own self-interest over the police officers he claims to lead. He has chosen to cringe in fear of the anti-police extremists, rather than standing up for New Yorkers who want a functioning police department, with cops who are empowered to protect them and their families,” Lynch’s statement said. “With this decision, Commissioner O’Neill has opened the door for politicians to dictate the outcome of every single NYPD disciplinary proceeding, without any regard for the facts of the case or police officers’ due process rights.”

“He will wake up tomorrow to discover that the cop-haters are still not satisfied, but it will be too late. The damage is already done. The NYPD will remain ruddlerless and frozen, and Commissioner O’Neill will never be able to bring it back,” Lynch continued. “Now it is time for every police officer in this city to make their own choice. We are urging all New York City police officers to proceed with the utmost caution in this new reality, in which they may be deemed ‘reckless’ just for doing their job. We will uphold our oath, but we cannot and will not do so by needlessly jeopardizing our careers or personal safety.”

Lynch echoed these thoughts at a press conference.

Pantaleo, who had been on desk duty since Garner’s death, was suspended on Aug. 2 after Judge Maldonado recommended his firing. Despite the high-profile nature of the case and disturbing video evidence of what occurred, the Department of Justice previously announced that it would not bring charges against Pantaleo. A Staten Island jury previously arrived at the same decision.

Pantaleo will reportedly sue O’Neill in an attempt to get his job back.