‘We R All on the Same Team’: Paul Manafort and Sean Hannity’s Private Messages Have Been Unsealed 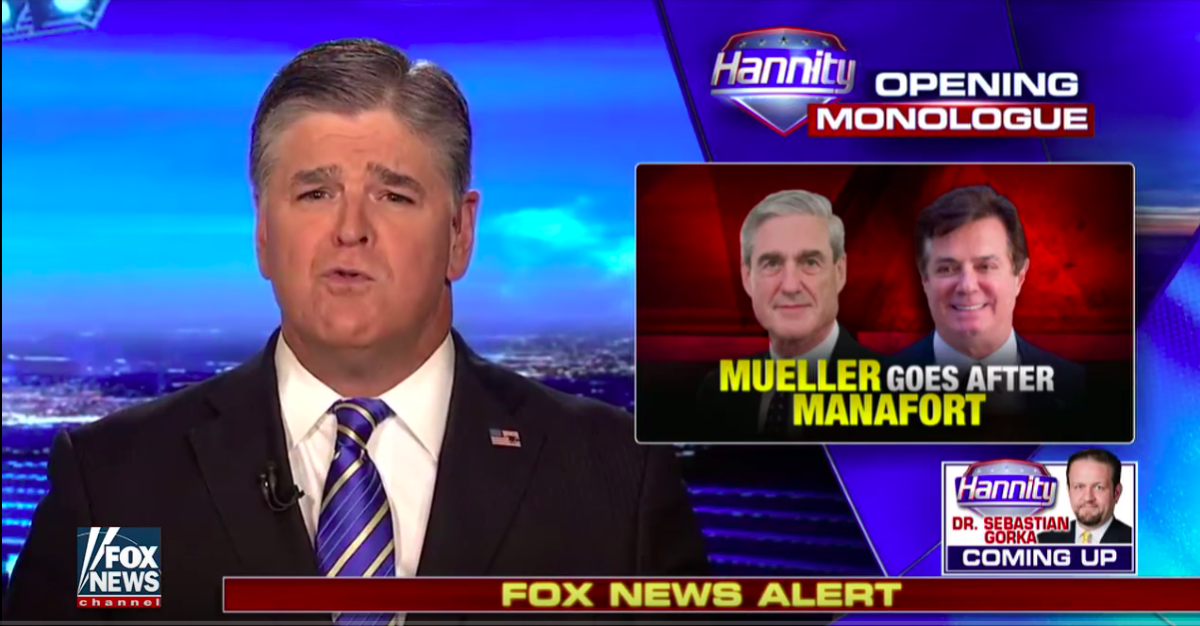 Court documents released Friday reveal hundreds of messages sent between former Trump campaign chairman Paul Manafort and Fox News host Sean Hannity. The new documents were unsealed on the docket for Manafort’s federal court case in the District of Columbia. They were previously filed as a secret attachment to a government sentencing memo.

You can read them all for yourself at the bottom of the article.

The messages showed Manafort, for the most part,  praising Hannity for his support of President Donald Trump on his cable show and criticizing special counsel Robert Mueller’s tactics in his investigation into Manafort’s criminal misdeeds.

Hannity expressed disdain for Hillary Clinton, Mueller, and Democratic politicians. He also repeatedly urged Manafort to appear on his show.

“Just watched last nights [sic] show. I appreciate what you tried to do. Mueller is trying to intimidate me. The raid is just one example. I won’t let him succeed but it is very lonely fighting this fight. I feel all alone out there. Except for you and a few others, our side is not engaged,” Manafort wrote in August of 2017, adding, “Thank you for your help.”

Manafort also blamed the media for his troubles, saying, “The media is trying to split me with [Donald Trump] and family by lies and untruths.” He later said his “new lawyers” were “junk yard dogs and will undo a lot of this injustice.”

Manafort went on to be sentenced twice–once in the Eastern District of Virginia and once in Washington, D.C.– for a litany of federal offenses.

In August 2018, Manafort was found guilty of tax fraud, bank fraud, and failure to disclose a foreign bank account. Manafort was then scheduled to be tried on charges of conspiracy to defraud the United States in Washington, D.C. for failing to register as a foreign agent, money laundering, witness tampering, and making false statements in September 2018.

Manafort, however, agreed to plead guilty in advance of that, therefore never undergoing a second trial by jury. He also agreed to a cooperation agreement that the government would later say he breached by lying. Manafort was sentenced in this case, meaning he amassed a total of seven-and-a-half years in prison. Manafort is also facing state fraud charges in New York, including: three counts of residential mortgage fraud in the first degree; one count of attempted first-degree residential mortgage fraud; three counts of conspiracy in the fourth degree; eight counts of falsifying business records in the first degree; and one count of scheme to defraud in the first degree.

Hannity and Manafort also discussed the possibility of then-Attorney General Jeff Sessions appointing a special counsel to investigate Hillary Clinton over the Uranium One deal.

“Sessions did not sound like he will be appointing a spec counsel on uranium one or anything,” Manafort wrote. “Nope,” Hannity responded, “I know an investigation happening.”

In March of 2018, Manafort told Hannity, “You and Roger were great TV tonight,” referring to Roger Stone.

“We r all on the same team,” Hannity responded.

“And we will prevail,” Manafort declared.

Hannity responded to these revelations with a tweet on Friday evening.

My view of the Special Counsel investigation and the treatment of Paul Manafort were made clear every day to anyone who listens to my radio show or watches my TV show.

Paul Manafort Correspondenc… by on Scribd

Editor’s note: This story was updated with a statement from Sean Hannity.