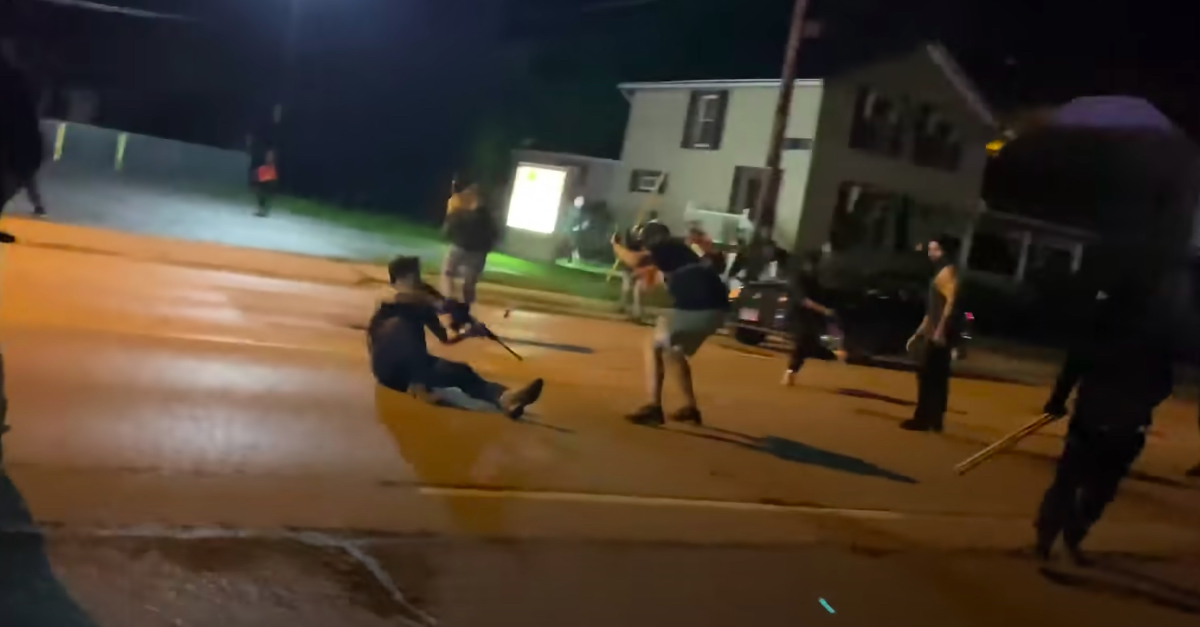 Kyle Rittenhouse fired at demonstrators during protests in Kenosha, Wis.

The parents of one of the men fatally shot by Kyle Rittenhouse during last year’s protest against police violence filed a federal lawsuit Tuesday alleging that the city of Kenosha and its law enforcement agencies conspired with militia groups and facilitated the violence that left two protesters dead.

The complaint was filed in the U.S. District Court for the Eastern District of Wisconsin on behalf of Anthony Huber’s estate against Sheriff David Beth, former Police Chief Daniel Miskinis, acting Police Chief Eric Larsen, and unnamed officers and deputies who were on duty the night Huber was killed.

The suit claims that police were notified about the private citizens who took up arms during the protest, but instead of treating them like a possible threat, officials “deputized” the militias and allowed them to carry out justice as they saw fit.

“Astonishingly, the Kenosha Police Department, Kenosha County Sheriff’s Department, and their supervising officials and police officers, did not treat Rittenhouse or any of the other armed individuals patrolling the streets as a threat to the safety of themselves or the citizens they were sworn to protect,” the complaint states.

“Instead, Defendants deputized these armed individuals, conspired with them, and ratified their actions by letting them patrol the streets, armed with deadly weapons, to mete out justice as they saw fit. In addition, Defendants thanked Rittenhouse and other armed individuals, gave them water, and allowed them to openly defy the emergency curfew order that was in place. Defendants even made plans to funnel the protestors toward the armed individuals [to] ‘deal with them.’”

The demonstration came together in response to the shooting of Jacob Blake, a Black man who was shot several times in the back by a white police officer, leaving him paralyzed from the waist down. The then-17-year-old Rittenhouse brought an assault rifle across state lines to attend the demonstration. He also shot and killed Joseph Rosenbaum during the protest. A third person was also injured in the shooting. Rittenhouse is facing charges of first-degree intentional homicide and first-degree reckless homicide in addition to a slew of weapons charges and other lesser crimes. Rittenhouse has pleaded not guilty and will be tried in November. His attorney has asserted that he fired in self defense in public statements.

The causes of action assert that law enforcement conspired to “obstruct justice based on invidious discrimination” and deprived Huber of constitutional rights to free speech, peaceful assembly, and equal protection under the law.

Attorney Anand Swaminathan, who is representing the Huber estate in the matter, said the police reaction to Rittenhouse fatally shooting multiple people in the street spoke volumes about the disparate treatment of protesters and militia members.

“After he had killed and maimed multiple individuals, Kyle Rittenhouse walked up to a dozen Kenosha police officers, assault rifle in hand, with crowds yelling that he had just killed innocent people. What did the police do? They spoke to him and let him walk away,” Huber said in a statement released with the lawsuit. “Make no mistake: if Kyle Rittenhouse had been Black, or had been wearing a Black Lives Matter t-shirt, there is no way on God’s green earth he would have been allowed to walk away. More likely he would have been shot dead in the street.”

Attorney Sam Hall, who is representing Kenosha County and Sheriff Beth, said the claims in the complaint were baseless.

“While we understand that the family of Anthony Huber is grieving his loss, we must make it clear that the allegations . . . are demonstrably false and that the facts will show that Mr. Huber’s death was not caused by any actions or inactions of Kenosha County law enforcement,” he said in a statement released to various news outlets.