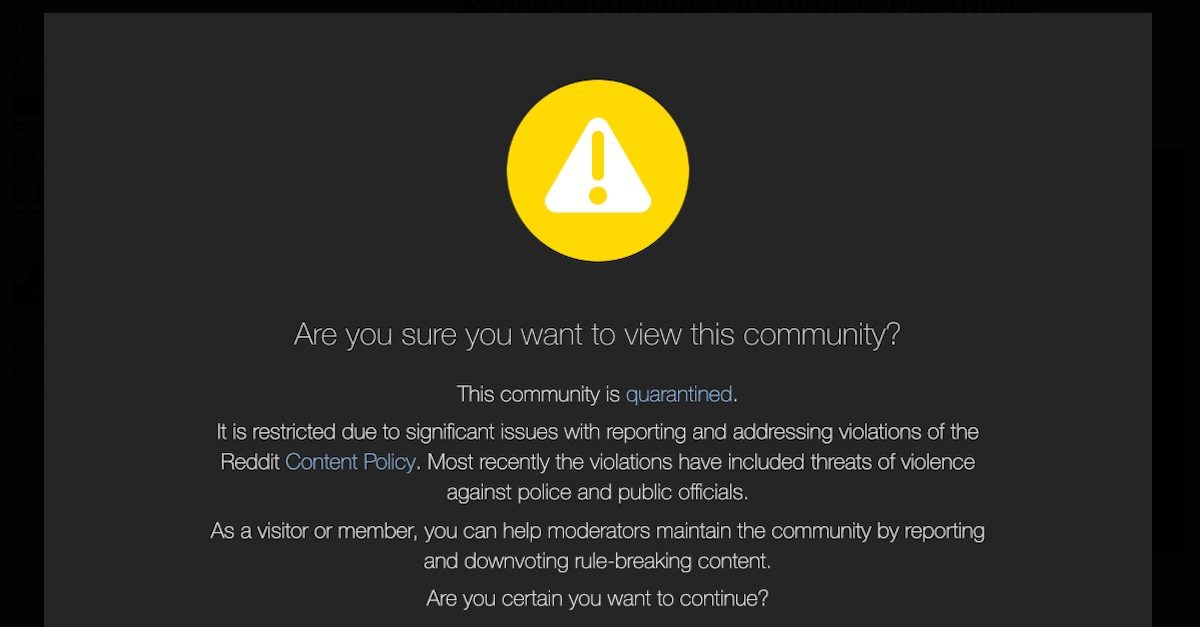 Reddit on Wednesday quarantined its largest platform for supporters of President Donald Trump after a number of death threats against politicians and police were posted to the site.

The subreddit, called “r/The_Donald,” was created during the 2016 presidential campaign and generally functions as a forum dedicated to sharing pro-Trump news and opinions amongst its 755,000 active members. The community bills itself as “a never-ending rally dedicated to the 45th President of the United States.”

Under Reddit’s quarantine protocol, activity on the subreddit is not banned, but its appearance and content are downgraded across the Reddit community. Users seeking entry are also met with a warning and must provide an additional level of consent before accessing the community.

“Are you sure you want to view this community?,” the warning begins. “The community is quarantined. It is restricted due to significant issues with reporting and addressing violations of the Reddit Content Policy. Most recently the violations have included threats of violence against police and public officials.”

In a public message issued Wednesday to moderators of the site, Reddit wrote revealed that the threats were made in reference to the recent partisan feud unfolding in the Oregon state legislature.

“The reason for the quarantine is that over the last few months we have observed repeated rule-breaking behavior in your community and an over-reliance on Reddit admins to manage users and remove posts that violate our content policy, including content that encourages or incites violence,” the message read. “Most recently, we have observed this behavior in the form of encouragement of violence toward police officers and public officials in Oregon.”

As previously reported by Law&Crime, Oregon Governor Kate Brown (D) last week announced she was dispatching the state police to round-up Republican lawmakers who had fled the state to prevent the passing of a climate bill.

According to Reddit’s guidelines, “The purpose of quarantining a community is to prevent its content from being accidentally viewed by those who do not knowingly wish to do so, or viewed without appropriate context.”

However, Reddit is generally regarded as a paragon for unbridled free speech, and does not quarantine subreddits based on content lightly, as evinced by the subreddit “r/whitenationalism,” which has been active for years and runs without quarantine.

Before restoring the community back to full operational capacity, Reddit’s administrators are requiring “r/The_Donald” moderators to, among other things, “unambiguously communicate to your subscribers that violent content is unacceptable.”