Attorneys for Omarosa Manigault Newman have accused the Justice Department of intentionally preventing her from completing and filing the financial disclosures she was required to tender after she was fired in Dec. 2017 from the Trump administration.  That accusation came in a Thursday court document filed to oppose an earlier government motion to have the case against Omarosa  opposition an earlier DOJ motion to end the case in the government’s favor.

The core lawsuit, filed in June 2019, seeks to impose a civil penalty of $61,585 on Omarosa for “knowingly and willfully” violating the Ethics in Government Act (EIGA) by “failing to file the required public financial disclosure report after her employment terminated with the Executive Office of the President.”

Omarosa was the director of communications in the White House Office of Public Liaison.

Despite having dropped a number of the previous administration’s controversial legal battles, the Biden administration has continued to pursue its lawsuit against the former reality show star for allegedly failing to follow legally mandated procedures after leaving the White House.

The DOJ under President Joe Biden last week asked U.S. District Judge Richard Leon to grant the government’s request for summary judgment in the case, saying Manigault Newman made “no attempt” to file her disclosure until late 2019—”more than a year and a half after it was due and after this litigation was commenced.”

But in a reply submitted in Washington, D.C. federal court on Thursday, Manigault Newman and her attorney John Phillips asserted that the Trump White House kept hidden the information Omarosa needed to complete the disclosures by refusing to return her personal effects.  The document says the move was an act of retaliation after Omarosa published her tell-all book Unhinged.

“It is an undisputed, indisputable fact that the Plaintiff prematurely filed this lawsuit while withholding and ignoring requests for aid by Defendant, while literally intentionally withholding, if not converting, her belongings (‘the boxes and the records inside them’) while only selectively escalating her claims coinciding with the President’s own hateful tweets and public vengeance over her book about her time in the White House,” the document states. “Plaintiff’s assertion that Defendant’s inability to file her termination report within 30 days stands as an egregious, willful mischaracterization of the facts. Instead, Mrs. Manigault Newman was met with constant negative interference that prevented her from successfully completing the report within statutory requirements.”

Omarosa further says she requested her personal effects several times following her termination — but that the White House refused to return them. She contended that the government, by “intentionally withholding information,” negated any element of willfulness on her part.

“The Department of Justice cannot demand an accurate and timely report but then intentionally sabotage the timely and accurate completion of that report,” Phillips wrote. “It is, respectfully, absurd that when Defendant or her counsel request assistance from these parties, they are often met with delayed responses and vague instructions.”

Omarosa, while asserting that the DOJ is selectively persecuting her and that the Trump lawsuit has always and only been above “revenge,” asks the court to put an end subjective enforcement of the EIGA. 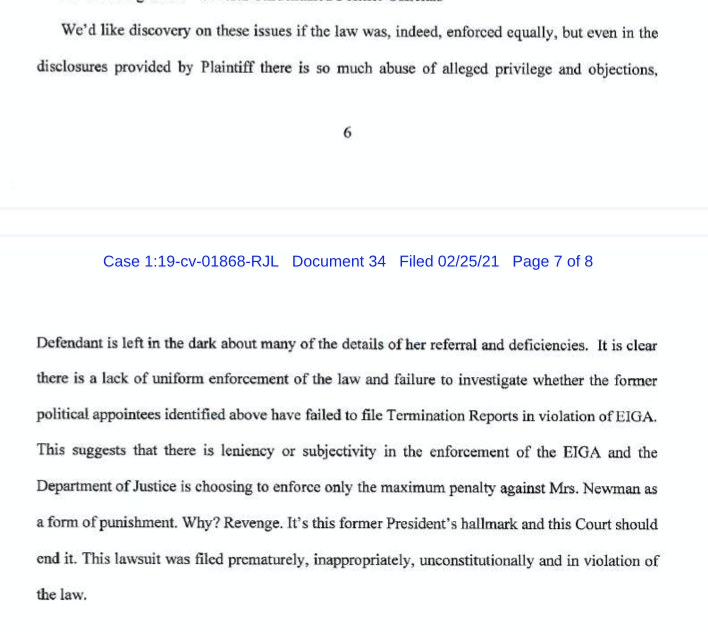 “Revenge. It’s this former President’s hallmark and this Court should end it,” the filing concludes. “This lawsuit was filed prematurely, inappropriately, unconstitutionally and in violation of the law.”

Read the full Omarosa motion below: