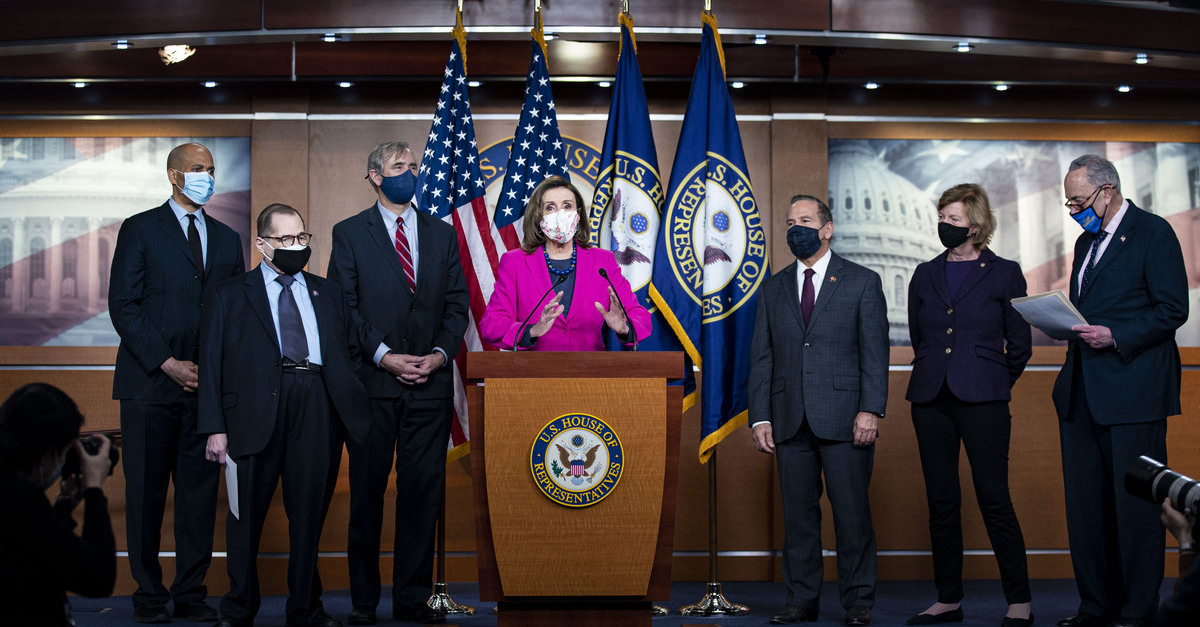 In a 224-206 vote, three House Republicans joined all House Democrats in support of the Equality Act. The bill was first introduced in 2016 and expands existing anti-discrimination statutes in federal law that cover the areas of employment, education, credit, jury service, federal funding, housing, and public accommodations.

“In 2021, every American should be treated with respect and dignity,” Cicilline said in a statement earlier this month. “Yet, in most states, LGBTQ people can be discriminated against because of who they are, or who they love. It is past time for that to change.”

Public advocacy groups took part in a massive pressure campaign after the act was introduced on Feb. 18, bringing the legislation up for easy passage in short order. Those groups heralded Congress’s quick action after the legislation passed on an almost party-line vote.

“Here’s the truth: trans girls are girls, and protecting all girls from discrimination requires protecting girls who are trans,” Ria Tabacco Mar, director of the American Civil Liberties Union (ACLU) Women’s Rights Project, said in a statement. “As the ACLU Women’s Rights Project, we know there are many threats to women and to women’s sports, but we can say with confidence that trans women are not among them. The Equality Act closes critical gaps in our civil rights laws that leave us vulnerable to sexual harassment and discrimination. That’s good for all women.”

Scott Simpson is the public advocacy director for Muslim Advocates, a civil rights group that works to combat various forms of bigotry via litigation and public advocacy.

“The American Muslim community comprises people of every race, ethnicity, ability, gender identity and sexual orientation,” Simpson said in a statement. “LGBTQ Muslims and all LGBTQ people deserve to be protected from discrimination in all of its forms. The Equality Act is vital legislation that will modernize our civil rights laws and strengthen protections for people of all backgrounds. Under this needed update of civil rights protections, all communities, including all American Muslims, will be protected from discrimination by retail stores, airlines and more. The Senate now must pass this needed update to our civil rights laws. No one in the United States today should face discrimination because of who they are.”

“For some, it’s the easiest thing in the world,” she said during a press conference before the roll call vote. “For others, it took a level of courage and a, shall we say, fortitude to go forward. But all of them very important. As we do our inside maneuvering to get as many votes as possible, hopefully as bipartisan as possible, the outside mobilization, so essential to bring a drum – to have a drumbeat across America, for freedom, for liberty and justice for all.”

Pelosi also addressed the need for the Equality Act during her floor speech in support of the law:

It takes a momentous step towards full equality that brings our nation closer to the founding promise of liberty and justice for all, enshrined in the Preamble of our Constitution by our Founders in their great wisdom, also in our pledge to the flag.

And it is sadly necessary. I wish that it weren’t. Sometimes I just wonder why it is, but it is sadly necessary because many members of the national LGBTQ community live in states where, though they have the right to marry, they have no state-level non-discrimination protections in other areas of life. In more than 20 states, Mr. Speaker, LGBTQ Americans do not have specific protections against being denied housing because of their sexual orientation or gender identity, and over 30 states lack protections regarding access to education. And nearly 40 states lack protections regarding jury service.

The Equality Act has passed the House before—only to be serially stalled out in the Senate. But with Democrats in control of the upper chamber for first time since 2012, and with President Joe Biden also supportive, Pelosi said she expects the bill to finally become the law of the land.

In 2019, the Equality Act became something of a cultural touchstone after country-pop songstress Taylor Swift tweeted out in support of the long-promised legislation—while at the same time accusing self-professedly pro-gay rights then-president Donald Trump for his hypocrisy. As a candidate, Trump frequently said he was a friend to the LGBTQ community, but his administration waged countless battles in the courts and via the administrative state to deny LGBTQ Americans various rights and legal recognitions.

Swift, who is currently busy with several legal battles of her own in the realm of intellectual property law, again tweeted out her support for the Equality Act after the House moved the legislation forward on Thursday.

YES!!! Fingers crossed and praying that the Senate will see trans and lgbtq rights as basic human rights. 🏳️‍⚧️🏳️‍🌈🇺🇸 https://t.co/Nb19UGXgY3

“YES!!!” the evermore artist wrote. “Fingers crossed and praying that the Senate will see trans and lgbtq rights as basic human rights. “

Jennings described the decades-long fight for full equality under the law faced by LGBTQ Americans:

Since the introduction of the first Equality Act in 1974 – nearly fifty years ago – LGBTQ advocates and our supporters in Congress have been fighting to win explicit protections for LGBTQ people in federal nondiscrimination laws. The time has come to enact those protections: 47 years is long enough to wait for protection of our basic rights as citizens. LGBTQ people across the country still remain vulnerable to discrimination daily due to the lack of comprehensive federal protections, as evidenced by the more than 5,000 requests for help Lambda Legal receives on it Legal Help Desk each year. The Equality Act not only fills in those gaps, but also brings our civil rights laws into the 21st century by extending protection against discrimination on the basis of sex, race, color, national origin, and religion to places that aren’t currently covered by our civil rights laws, to establishments like retail stores, transportation services like taxis and Ubers, and service providers like accountants. Today, the House took that important step. It is now time, in fact way past time, for the Senate to do the same.

Aside from historic LGBTQ protections, the act also amends the Civil Rights Act of 1964 to add protections from discrimination in public places and services on the basis of sex, race, color, national origin, and religion where those protections do not already exists.

ReNika Moore, director of the ACLU’s Racial Justice Project, praised the thorough nature of the legislation.

Notably, seven GOP members of the House voted for the Equality Act when it was last introduced, including Rep. Elise Stefanik (R-N.Y.). The Upstate New York-based Republican backtracked from that vote, however, and did not support the bill this time around.