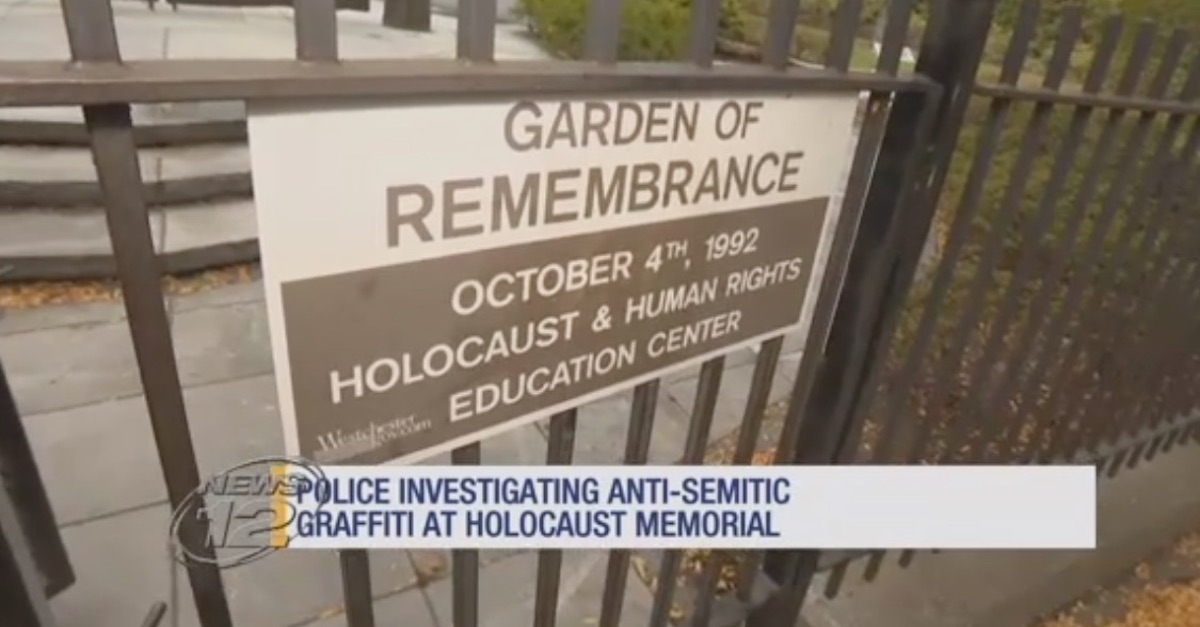 New York officials expressed outrage Tuesday and Wednesday after “anti-Semitic materials” were found at a Holocaust memorial in White Plains ahead of Yom Kippur, the holiest day of the Jewish year. Yom Kippur began Tuesday evening and ends Wednesday evening.

News 12 Westchester reported that anti-Semitic graffiti and a “hate poster” were found at the Garden of Remembrance on Monday:

According to the Holocaust and Human Rights Education Center, which oversees the garden, the graffiti and poster were found in a spot meant to honor the memories of the millions of men, women and children killed in the Holocaust. It also pays tribute to the brave people of all faiths who risked their lives to save others.

Although authorities are said to be investigating surveillance footage, no suspect has been named at this time.

Westchester County Executive George Latimer said he was “enraged” and confirmed that police are investigating. A statement attributed to Latimer was posted on the county’s Twitter account:

On the eve of Yom Kippur, the highest of holy days in the Jewish faith, anti-Semitic materials were discovered today at the Garden of Remembrance in downtown White Plains. We are enraged by this act and heartbroken that individuals would target members of our community on the most solemn day in their tradition. County Police are actively investigating and reviewing video of the area; we seek to find and punish those who did this act. We as a County, people of all faiths, stand with our Jewish brothers and sisters today and always.

New York Gov. Andrew Cuomo (D) has also responded to the “desecration” of the memorial, saying the State Police Hate Crimes Task Force have been directed to get involved in the investigation.

A similar incident is under investigation at Yale Law School, where “graffiti depicted a white, spray-painted swastika above the word ‘Trump'” over the weekend.

In Germany, an apparent attempted attack on a synagogue was foiled on Wednesday. A woman was shot dead on a nearby street, while a man was killed in a kebab restaurant. The suspect, who is in custody, allegedly attempted to get into the synagogue but was not successful.