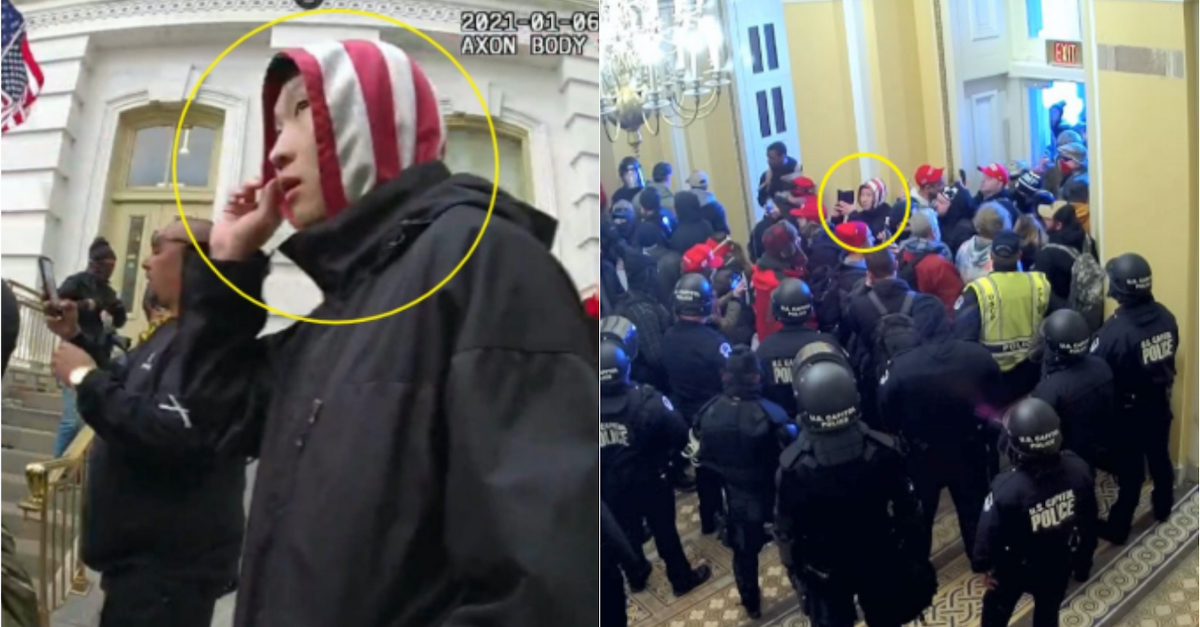 A Marine Reservist currently facing charges for storming the U.S. Capitol on Jan. 6 has been named in an indictment accusing him and a nurse of making and selling fake Covid vaccination cards.

Federal prosecutors say that Steven Rodriguez, 27, a nurse at a healthcare clinic on Long Island, and Jia Liu, 26, a member of the U.S. Marine Corps Reserve, plotted to make and distribute false cards that claimed to show a person had received the COVID-19 vaccination when they hadn’t.

The indictment from the U.S. District Court for the Eastern District of New York was unsealed Thursday. It did not identify the healthcare clinic where Rodriguez was a nurse, but said that the name of the clinic was known to the grand jury.

Prosecutors say that between March of 2021 and February of 2022, Rodriguez and Liu managed to get at least 300 fake cards into circulation through a multi-step scheme that included destroying actual vials of the vaccine, appointments at a clinic that otherwise offered genuine COVID-19 care and issued legitimate vaccinations and cards, and code names invoking pop stars and Pokemon.

“To facilitate creating false entries in Immunization Databases, RODRIGUEZ and LIU directed Buyers to make genuine appointments at the Healthcare Clinic to receive a COVID-19 vaccine. When a Buyer visited the Healthcare Clinic, RODRIGUEZ met the Buyer but did not administer the vaccine. Instead, RODRIGUEZ (a) destroyed a vial of vaccine intended to be used to vaccinate a patient; (b) provided a forged COVID-19 Vaccination Card that he completed to make it falsely appear that the Buyer had received a dose of vaccine that RODRIGUEZ had in fact destroyed; and (c) made entries in the Immunization Databases falsely indicating that the Buyer had been vaccinated. These steps allowed the Buyer to falsely present himself or herself as vaccinated. RODRIGUEZ and LIU charged a premium for making these false Immunization Database entries.”

Rodriguez and Liu allegedly pulled in customers through encrypted messaging apps and social media. They referred to the fake cards with code names including “gift cards,” “Christmas cards,” “Cardi Bs,” and “Pokemon cards.”

They also offered a range of choices for the fake cards, prosecutors allege. Customers could opt for a blank COVID-19 vaccination card, or a completed card listing the buyer’s name, date of birth, and date, location and lot number of the COVID-19 vaccine they falsely claim to have received.

Rodriguez and Liu also offered the unvaccinated buyers false entry into New York state and city immunization databases, allowing them to get the state’s Excelsior Pass, which certain business and venues rely on as proof of vaccination.

The fraud charges against Liu and Rodriguez carry a potential 10-year prison sentence.

If the allegations are true, Liu will likely have violated the first condition of his pretrial release in another case—the federal government’s pending charges against him relating to the Jan. 6 attack on the U.S. Capitol, when scores of Donald Trump supporters overwhelmed police and stormed the building, temporarily stopping Congress from certifying Joe Biden‘s win in the 2020 presidential election.

Liu allegedly climbed through a broken window to breach the Capitol building, according to federal prosecutors. He is not accused of committing any further acts of violence.

Liu was arrested in late October and charged with the four disorderly conduct crimes that have come to be known as the “standard misdemeanors” in Jan. 6 cases. He was released on a personal recognizance bond in November, and according to court documents, Liu was expressly prohibited from violating federal, state, or local law while on release.

Court records show that the next hearing in Liu’s Jan. 6 case is set for Friday.

Read the indictment against Rodriguez and Liu, below.