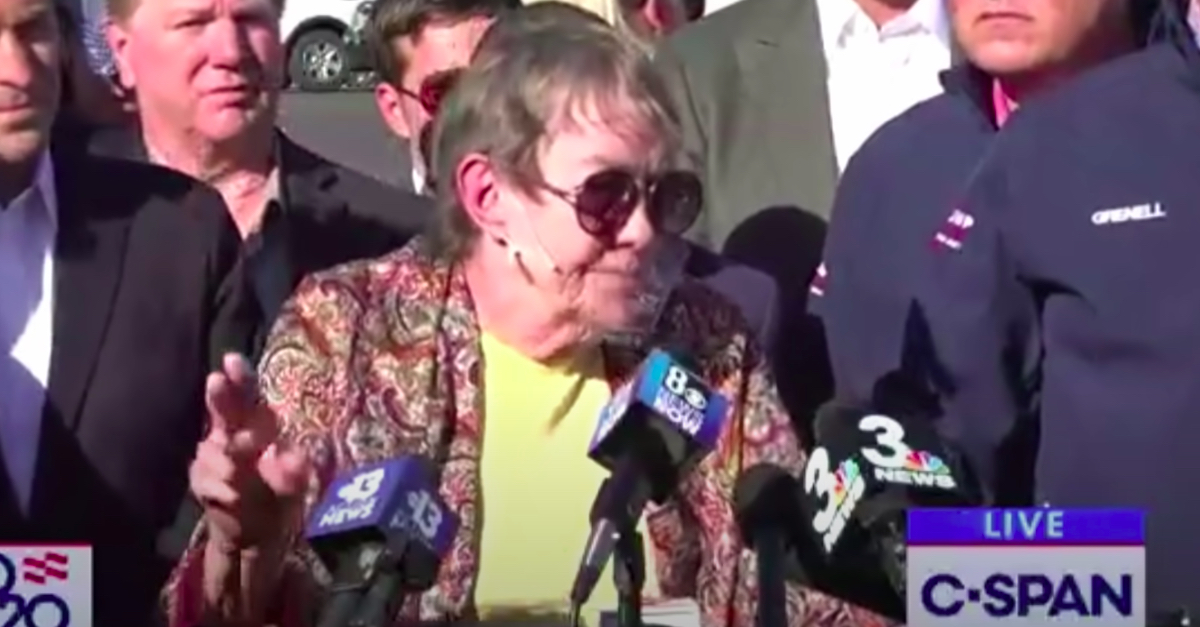 The circumstances surrounding one of the plaintiffs in a GOP-touted lawsuit alleging nefarious tales of voting irregularities and fraud in Nevada continued to get stranger on Friday, further complicating the already long-shot effort to challenge election results in the state.

The case revolves around Jill Stokke, a legally blind 79-year-old Nevada, who Trump campaign officials said was prevented from voting in-person because someone had stolen and sent in her mail-in ballot two weeks prior without her knowledge. An initial hearing was scheduled for Friday afternoon before U.S. District Judge Andrew Gordon.

“I went to vote and was told I already voted,” Stokke said in a brief statement during Thursday’s press conference announcing the lawsuit. She said that she’d only ever voted in-person in the past, saying, “this time they mailed out the ballot and somebody took my ballot.”

As previously reported by Law&Crime, Clark County Registrar of Voters Joe Gloria pushed back on Stokke’s claims and said he personally handled her complaint. After an initial review, election officials believed that the signature on the ballot matched the Stokke signature they had on file. But the county still gave Stokke the option to challenge her verified mail-in ballot and cast a provisional ballot, an option she refused.

According to an Election Day report on the matter from an investigator in the Nevada Secretary of State’s Office, first obtained by the Nevada Independent, Stokke refused to submit an official complaint and cast a provisional ballot because she didn’t want to criminally implicate the person who she alleged had voted in her place. (Nevada Secretary of State Barbara Cegavske is a Republican.)

“Stokke told me she thought an individual being evicted from her residence [in mid-October] may have taken her ballot. She said when she advised Gloria of this, he produced two yellow legal pads and told her if she provided a statement regarding the possible theft of her ballot, she would be provided a provisional ballot to cast” the report from Chief Investigator Paul Tucker read. “Stokke told me she did not think she should be pressured into implicating another person in a crime when she had no proof this crime actually occurred.”

In other words, according to this account: Stokke believed her ballot was stolen and complained about this, but she didn’t want to punish the person allegedly responsible and make sure her vote would count as she intended. Instead, she went to the media to say she had been wronged. Huh?

Per the report, Tucker again attempted to persuade Stokke to submit a statement, reiterating that if she were to simply cast two ballots she could be charged with a crime.

“Stokke maintained she should not have to implicate another person in a crime in order to cast her vote,” the report said, adding that she instead chose to contact several local news outlets and tell her story. Eventually she was the star of a Trump campaign press conference.

The Nevada Secretary of State’s Office said Stokke told Tucker she was no longer going to pursue the matter because “she felt like she had done everything she could,” though that clearly was not the case.

Here is the @NVSOS investigation report into the case of Jill Stokke, the legally blind Las Vegas woman who said someone else cast her ballot & is lead plaintiff on federal lawsuit against Clark County over signature verification machine pic.twitter.com/z7BKu4riYR

Additionally, in the lawsuit filed Thursday, the complaint stated that Stokke was turned away from the polls on Nov. 3, a week after she initially claimed the event occurred.

“On information and belief, it was Clark County’s use of Agilis signature-verification software that allowed Plaintiff Stokke’s ballot, which she had not signed, to be accepted and counted in the Election,” the complaint claimed.

It should be noted that Stokke’s attorneys didn’t even allege ballot theft in court. That’s not what the Trump campaign said on Twitter, however: “WATCH: #Nevada voter Jill Stokke on how her ballot was stolen.”

WATCH: #Nevada voter Jill Stokke on how her ballot was stolen pic.twitter.com/oSIMy88dFb

A federal judge REJECTS an injunction in the GOP-touted lawsuit alleging shaky claims of voter irregularity in Nevada.

"I don't think the plaintiffs have demonstrated a likelihood of success."