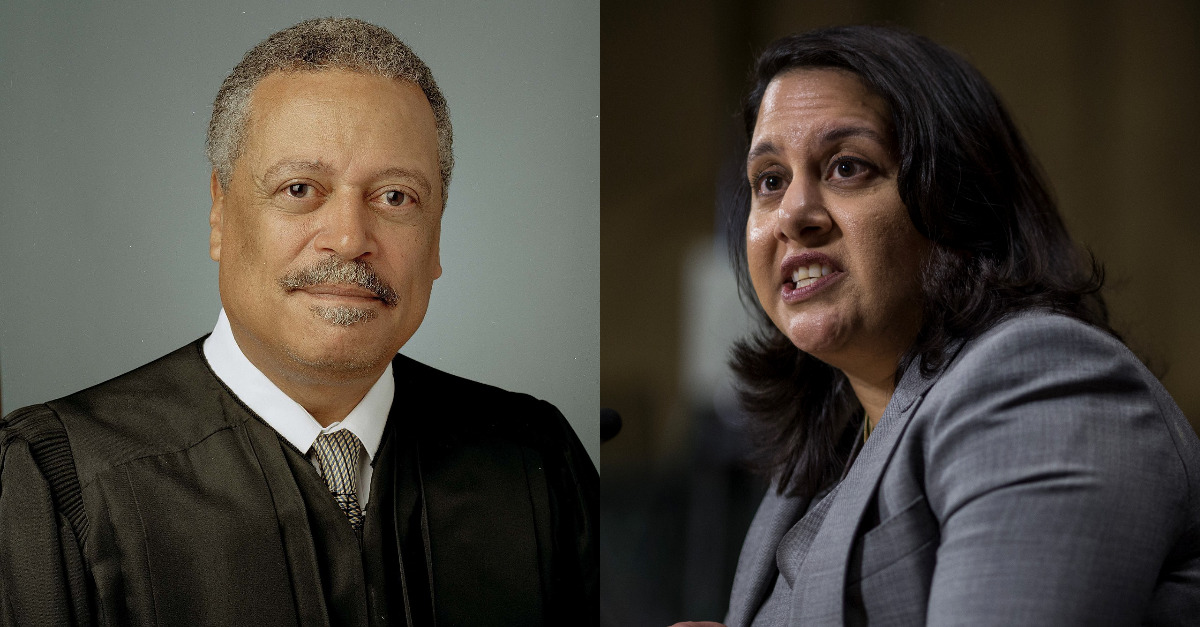 An en banc U.S. Court of Appeals for the District of Columbia Circuit on Monday denied former National Security Advisor and retired Lt. Gen. Michael Flynn’s emergency petition for a writ of mandamus. Circuit Judge Neomi Rao, a conservative who was appointed by President Donald Trump in March 2019, sharply and unsurprisingly dissented from the decision, just as she did when penning the opinion for a three-judge D.C. Circuit panel in June.

Rao, in one instance, criticized the majority for permitting U.S. District Judge Emmet Sullivan’s “unlawful incursions on the Executive Branch.” In another, she said Sullivan was subjecting Flynn to an “inquisition.”

“The majority takes a superficially appealing position that the district court must first decide the government’s motion to dismiss before this court may grant a writ of mandamus,” Rao complains near the outset. “In the ordinary course, this is how we proceed. Yet the facts here demonstrate a series of irregularities by the government and the district court. We reserve the writ of mandamus for extraordinary cases, and the circumstances in Flynn’s case are nothing if not extraordinary.”

The facts of the Trumpworld passion play vis-à-vis Flynn are well known by now: (1) he was sacked from his brief tenure in the Trump administration for lying; (2) he was caught up in the Russiagate investigation led by then-special counsel Robert Mueller; (3) he allegedly lied to federal agents about his contact with Russian Ambassador Sergey Kislyak; (4) he was indicted for lying and twice pleaded guilty; (5) evidence later surfaced that the Federal Bureau of Investigation (FBI) was close to shuttering the Flynn investigation and even wondered if their goal was to get Flynn to lie or to get him fired; (6) President Trump and Attorney General Bill Barr leaned on the levers of justice and the U.S. Attorney’s Office in the Washington, D.C. moved to dismiss the the charges against Flynn; (7) Bill Clinton–appointed Judge Sullivan seemingly smelled something not entirely unlike corruption at work and appointed retired judge John Gleeson as amicus curiae to present oral arguments in opposition to the Department of Justice’s motion to dismiss.

Flynn and his defenders subsequently cried for yet another foul. The retired military man’s legal defense team sought extraordinary relief via the writ of mandamus in light of the novel fact situation that their client found himself in–but it clearly didn’t work.

Rao believes the appeals court should have directed the lower court to finally toss the charges.

[T]he Executive Branch has a clear and indisputable right to control the initiation and dismissal of prosecutions,” the dissent argues. “The ‘leave of court’ authority under Rule 48(a) is narrow and does not permit a district court to countermand the Executive’s decision to dismiss a prosecution. Fundamental principles of separation of powers require that individuals be prosecuted only by democratically accountable prosecutors, not by district judges with life tenure. The district court’s actions here exceed the proper judicial role and impair the Executive’s performance of its prosecutorial functions.”

The entire legal debate in Flynn’s ongoing case is relegated to the meaning and effect of Federal Rule of Criminal Procedure Rule 48(a) which reads, in relevant part [emphasis added]:

Dismissal
By the Government. The government may, with leave of court, dismiss an indictment…

Several hundred pages of motions by interested parties have been filed in an effort to elucidate how and when, exactly, a court must sign off on a dismissal when the government asks it to do so. A simultaneous concern here is if a court must sign off on such a requested dismissal at all. An ancillary question is what happens if a court simply rebukes the request in its entirety. Concerns previously ignored and/or academic have now become the fodder of national headlines and charges of judicial usurpation of the police power.

[T]he Executive Branch has no adequate alternative remedy to mandamus,” the Trump-appointed replacement for Brett Kavanaugh argued. “Even if the district court ultimately grants the motion to dismiss, that would not alleviate the harms resulting from the supervision and inquisition delineated by the district court in its orders and briefing.”

The judge believed that such a denial here is not only harmful to the executive branch–but irreparably harmful, a legal term of art which means a claimed deficiency of justice cannot be placated by later monetary justice.

“Forestalling such irreparable harm to the Executive Branch makes mandamus appropriate here because the district court has adopted a flawed view of its authority in a manner that infringes on the exclusive constitutional powers of a separate and independent branch of government,” Rao continues.

The relatively brief per curiam majority decision–the dissent is nearly twice as long–largely avoids the merits of Flynn’s case. Instead, the ruling dispenses with a rote application of the mandamus doctrine and when it is applicable. Finding that Flynn has several other outlets to avail himself, the court ruled against him.

Rao insists the court should have taken up the merits here:

In denying the writ of mandamus, the majority relies only on its determination that Flynn and the Executive Branch have adequate alternative remedies, namely the eventual grant of the motion, the possibility of appeal, or even a writ of mandamus at some unspecified later time. Maj. Op. 7. The majority does not explain how these remedies would repair unlawful incursions on the Executive Branch. Instead, the majority dodges the constitutional questions by simply asserting a truism applicable to every mandamus case—a party could wait for an appeal or even a later mandamus petition. The ordinary availability of appeal does not relieve this court of its duty to examine the specific factual context of each mandamus petition and the precise irreparable harm alleged. We have no metric for judging the adequacy of alternative remedies without assessing the underlying harm…

“Nevertheless, the majority remains content with prospective remedies and sidesteps harms to the Executive,” the dissent continues. “Our mandamus inquiry requires more than this piecemeal approach, particularly when grave separation of powers concerns are at stake. Judicial encroachments on the executive power cannot be remedied simply by requiring the Executive to submit to a district court’s supervision and then seek appeal.”

Read the full opinion and dissent below: