Multiple Former OSU Wrestlers Say Jim Jordan Knew About Sexual Abuse, Did Nothing to Stop It 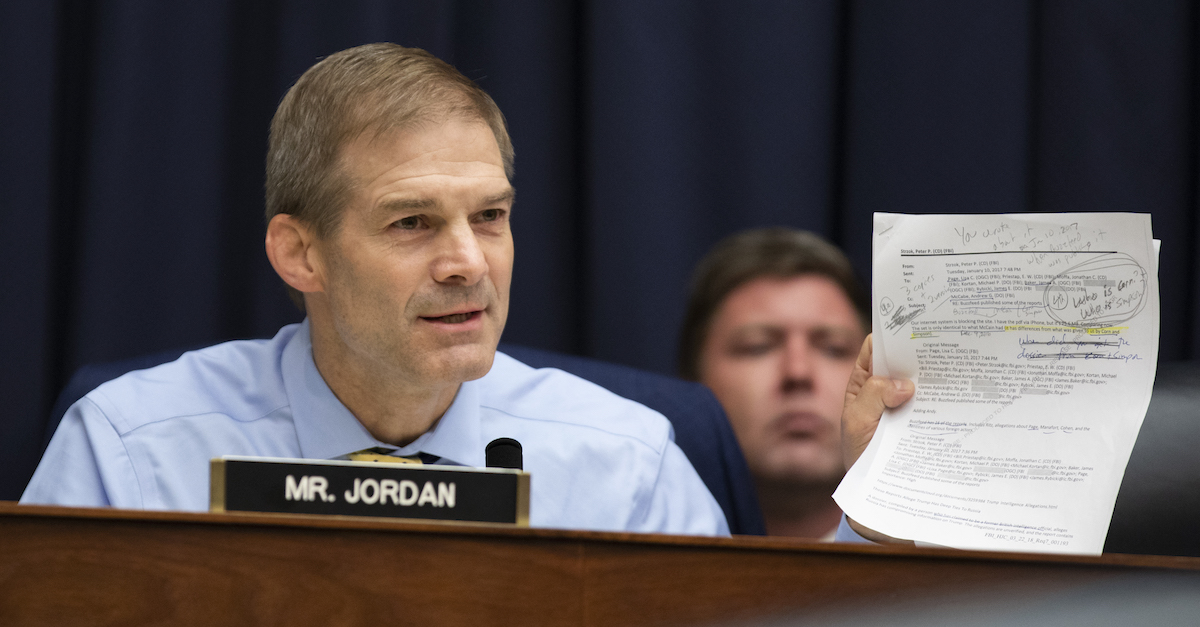 Tito Vazquez, Dan Ritchie, Mike Flusche, Dunyasha Yetts, Shawn Dailey and Mike Glane all told CNN, in one way or another, that Jordan was aware of sexual abuse but did nothing to stop it. They alleged the same of former head coach Russ Hellickson. Hellickson, five former assistant coaches and Jordan have denied knowing about Strauss’s sexual abuse of wrestlers.

Hellickson said in 2018 that he “learned of Dr. Strauss’ abuse two years ago” and “No one on any team ever told me a thing about being abused by Dr. Strauss.” The former assistants said “None of us saw or heard of abuse of OSU wrestlers” and that they would have spoken up if they had heard of such things. Jordan’s office also said at the time that Jordan “never saw any abuse, never heard about any abuse, and never had any abuse reported to him during his time as a coach at Ohio State.”

And Jordan freshly denied the allegations last week, per CNN.

But Vazquez recalled being molested by Strauss and then telling Jordan about the abuse. Vazquez said Jordan said, “I have nothing to do with this.”

He called Jordan’s denials a “betrayal in the highest level.” Ritchie said he remembered a teammate sounding the alarm about abuse and Jordan responding by saying,”If [Strauss] ever tried that with me I’d snap his neck like a stick of dry balsa wood.” Flusche also recalled the neck-snapping remark.

Ritchie said his response to Jordan’s denials was “Are you kidding?”

“I like Jimmy, but I think he took the wrong stance off the get go and now he can’t backtrack,” he said.

Yetts said that Strauss tried to take off his shorts when he went to him for treatment for a thumb injury in 1993. Yetts also said that he spoke to Jordan about it and Jordan replied by saying something to the effect of, “If he tried that on me, I would kill him.” Dailey and Glane remembered Yetts complaining about Strauss in Jordan’s presence, CNN reported.

In May 2019, 36 former student athletes filed a lawsuit against OSU, claiming that university officials “aided, abetted, and actively concealed” the sexual abuse Strauss committed. Michael DiSabato—who had previous come forward with his own story of abuse—was the lead plaintiff. Jordan once reportedly threatened called the cops on DiSabato.

Notably, DiSabato’s brother Adam DiSabato claimed as recently as February that Jordan called him up crying on the phone and asked him to undermine his own brother’s allegations.

“Jim Jordan called me crying, crying, groveling, on the Fourth of July,” he said, “begging me to go against my brother, begging me, crying for half an hour. That’s the kind of cover-up that’s going on here.”

The lawsuit said OSU “funneled Plaintiffs and other student-athletes to Strauss with assembly-line efficiency, whereupon Strauss cornered and sexually assaulted them. He sexually assaulted/abused most of the Plaintiffs more than once, and some wrestlers between 20-50 times.”

“Hernia checks often took several minutes. Some Plaintiffs, however, remember Strauss checking inspecting and fondling their genitals for ten or fifteen minutes. A line would form outside of Strauss’ exam room as the athletes completed the other stations and anxiously waited for Strauss to exam them,” the lawsuit said.

These exams allegedly became “rather notorious” and “at least one team head coach requested that someone other than Strauss conduct the hernia checks for team physicals.” The lawsuit listed the medical excuses Strauss allegedly made for his actions:

When Plaintiffs asked Strauss why he was massaging their genitals and probing their rectums, he came up with many different medical explanations. Hernia and lymph node checks were the most common explanations. Sometimes, Strauss placed his face so close to his patients that they could feel his breath on their genitals. Sometimes he had them stand on tables so his head was at crotch height. Other times he had them sit on a bench and spread their legs; he would then roll across the floor on a wheeled stool and stick his face deep between their legs to perform his exam. Sometimes Strauss would don a headlamp and turn off the room lights before putting his head inches away from patients’ penises. When one Plaintiff asked Strauss to explain the room lights off/headlamp behavior, Strauss said he was checking for skin rashes and STDs. He assured the Plaintiff that this technique allowed him to perform the best possible examination for those kinds of problems.