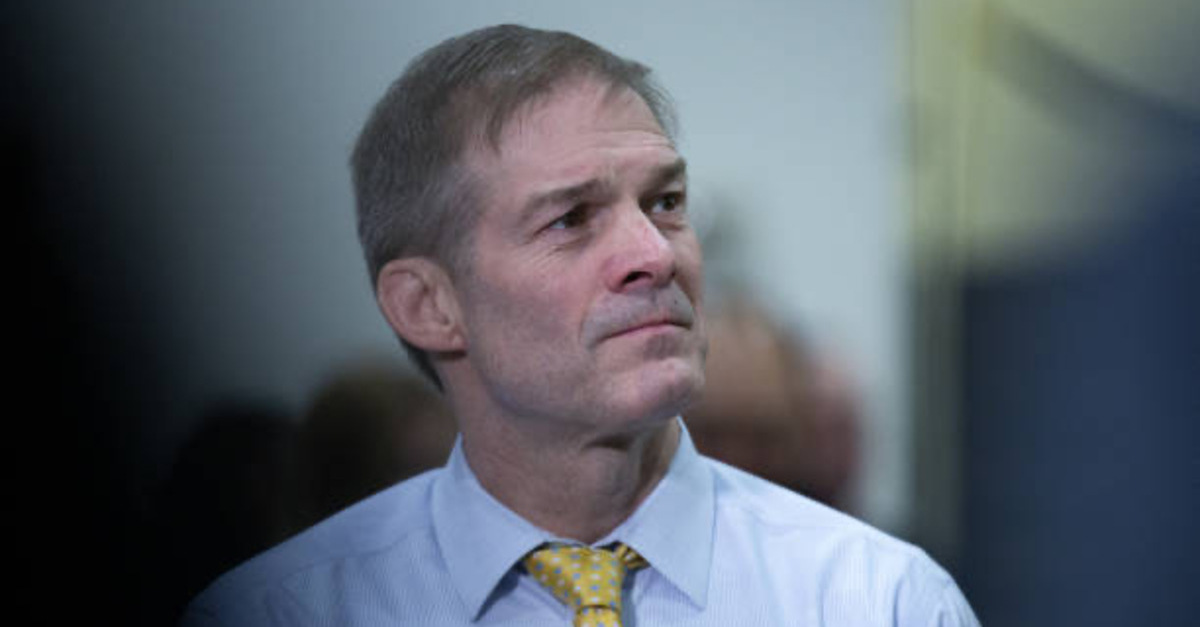 In a scene that was almost too on the nose, Rep. Jim Jordan (R-Ohio) left a U.S. House of Representatives hearing on sexual harassment at the highest levels of government on Thursday morning. The optics of that exit immediately called attention to Jordan’s own, ongoing scandal.

The House Judiciary Committee hosted the hearing on sexual harassment and other forms of workplace discrimination within the federal court system which featured several former law clerks who said they were victimized by federal judges.

According to Courthouse News reporter Megan Mineiro, Jordan was initially in attendance but quickly left once the woman began sharing their stories—suggesting the testimony perhaps hit a bit too close to home:

The first speaker, Olivia Warren, previously clerked for now-dead Ninth Circuit Judge Stephen Reinhardt. She began her testimony by describing an offensive drawing that was left on her desk to welcome her to her first day of work in the illustrious chambers of America’s judicial system.

“The judge himself asked me whether or not the drawing was quote ‘accurate,’ with a look that indicated whether or not it resembled my own breasts,” Warren said.

“I am not here to condemn Judge Reinhardt,” Warren noted—before later remarking upon the swirl of conflicting emotions she felt at his memorial service. “The juxtaposition of my anger and my grief and my shame was impossible to bear. The harassment had ceased.”

Warren said she chose to speak up only now, however, because the fear of retaliation was finally gone.

“My fear of retaliation is lessened because Judge Reinhardt is no longer on the bench,” she said. “My courage is bolstered by the brave women who have come before me.”

She also described the deceased judge’s disgusting behavior in lurid detail—but punctuated her testimony with a message of hope:

Her voice wavering, Warren speaks to other victims…

“To them I say, know that what you are going through is not your fault. Know that your feelings of powerlessness are not irrational. And know that if the system feels stacked against you, it is because right now it is.”

Hope is a word that’s likely foreign to the men who have called out Jordan’s alleged complicity in the Ohio State University (OSU) sexual abuse scandal.

The former OSU men’s wrestling team doctor Robert Strauss spent two decades sexually assaulting over 150 college athletes. During eight of those years, from 1986 to 1994, Jordan served as an assistant coach—but has consistently pleaded that he was completely unaware of the doctor’s crimes.

Whistleblowers and others say that’s not true.

A lawsuit citing an unnamed professional referee claims Jordan was in the know.

And lead OSU whistleblower Mike DiSabato has publicly accused Jordan of looking the other way and helping cover-up Strauss’s regime of sexual assault and exploitation.

Adam DiSabato—the whistleblower’s brother—also relayed a harrowing claim against Jordan to congressional investigators, saying the disgraced Ohio congressman personally called him and asked him to throw his own brother under the bus.

“Jim Jordan called me crying, crying, groveling, on the Fourth of July,” he said, “begging me to go against my brother, begging me, crying for half an hour. That’s the kind of cover-up that’s going on here.”

Small wonder Jordan wasn’t much interested in the testimony at Thursday’s hearing.