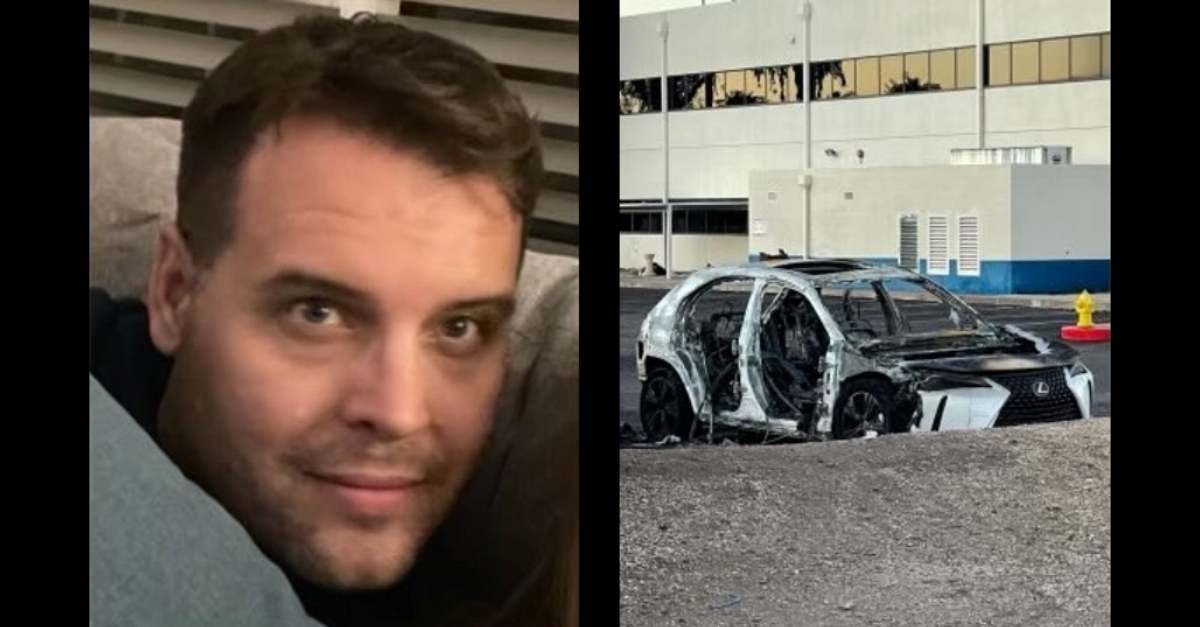 Benjamin Anderson, and his burned out car.

An Arizona man’s friends are calling out for help, saying he went missing on Friday, New Year’s Eve. The car of Benjamin Anderson, 41, was found burned, according the version of events in a KPNX report.

Friend Daniel Stahoviak reportedly said he was supposed to meet Anderson Friday for breakfast, but Anderson called to cancel at around 8 a.m.

Stahoviak said he and another friend went to Anderson’s apartment that night, and did not find him, but they did discover personal items: money, and debit and credit cards. There was a wet towel on the bed, which appeared to be out of place, he said.

He said he tracked Anderson’s Lexus to a Sheridan Hotel off of Black Canyon Highway, where he claimed to see three people around the car. Anderson was nowhere to be seen, however. Stahoviak said he called 911 and later found out that the vehicle was set on fire.

Kent Somers, a football columnist for The Arizona Republic, also said that the car was found burned.

Update of an earlier post regarding our friend. Car was found burned. pic.twitter.com/Kkoch8LC0d

“I can confirm that Benjamin Anderson is listed as a missing person,” Phoenix police sergeant Andy Williams told Law&Crime in an email. “This is an open investigation and was reported to Phoenix Police December 31st, at about 7:30 p.m. I don’t have any other information available about this investigation.”

Somers put up a notice, which said that Anderson was last seen at his home Friday morning.

Anderson is described as standing 6’1″, weighing at least 250 pounds, and has light brown hair, and brown eyes. He goes by the name Ben. Anderson was likely wearing shorts, a blue zipped sweatshirt, and a black t-shirt. He does wear glasses, the notice stated.

One of the people seen with the car was a slim woman, standing 5’11”, with blonde hair, and a pink beanie, according to KPNX. A second is described as a man of average height. He is supposed to have dark curly hair, and is either light-skinned Latino or white. There was no description for the third individual.