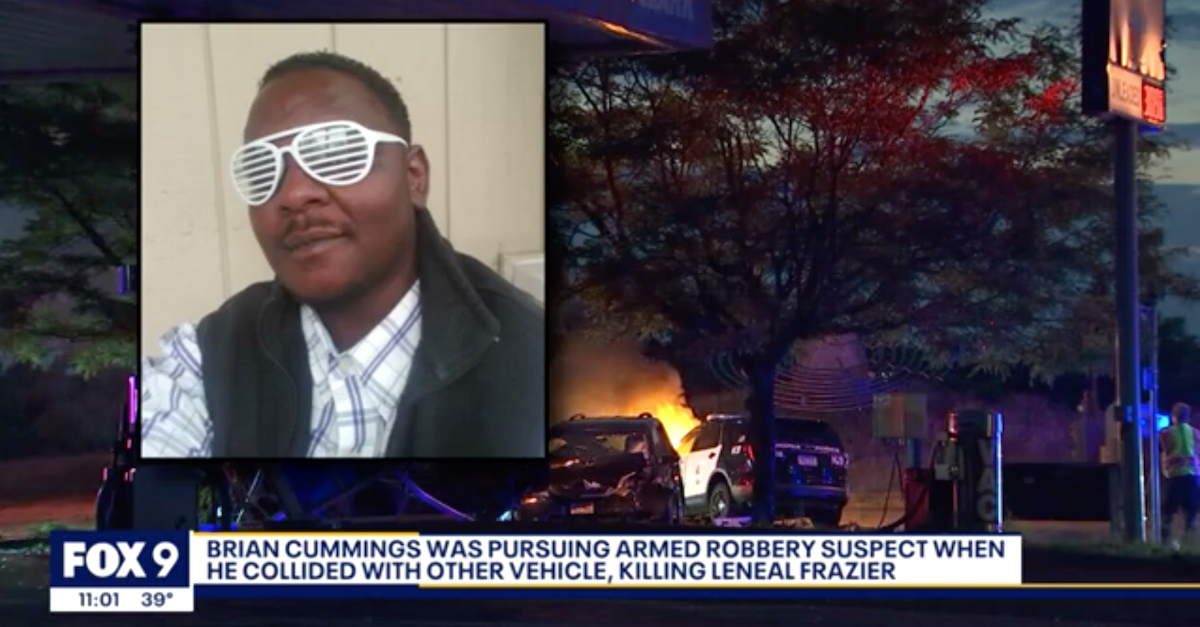 Leneal Frazier (inset) appears in a photo superimposed over video of the aftermath of the violent crash.

Prosecutors in Minneapolis on Friday filed two criminal charges against a city police officer who struck and killed Leneal Lamont Frazier. The victim was was the uncle of Darnella Frazier, the teen who recorded the murder of George Floyd and spread the video online.

A two-count criminal complaint accuses Brian Michael Cummings, 37, of Minneapolis, of second-degree manslaughter and criminal vehicular homicide. The first charge alleges that Cummings “created an unreasonable risk and consciously took a chance of causing death or great bodily harm.” It is punishable by up to ten years in prison or a fine of up to $20,000. The second accuses Cummings of “operating a motor vehicle in a grossly negligent manner” and “causing the death” of the victim.

A statement of probable cause attached to the criminal complaint says Cummings saw a black Kia Sportage that he believed “matched the description of a stolen vehicle that was suspected to be involved in thefts from businesses.”

The 12:31 a.m. spotting on July 6 led to a police chase — despite the underlying thefts involving what prosecutors downplayed as only “some limited use of force.”

“[T]here were no allegations that the thefts of the Vehicle or businesses involved weapons or that they resulted in bodily harm or injury to victims,” the document says.

With lights flashing and sirens blaring, Cummings chased the vehicle as it “accelerated away.” The pursuit continued for some 20 blocks, including through “residential neighborhoods in north Minneapolis” at “extremely high speeds nearing 100 miles per hour.”

“[T]he Defendant followed the Kia Sportage through stop signs, red lights, and intersections that included partially obstructed views of potential approaching vehicles,” the document went on. It then cited a Minneapolis Police Department policy (MPD Policy 7-402) that forbids officers from chasing a vehicle “if the pursuit poses an unreasonable risk to the officers, the public or passengers of the vehicle being pursued who may be unwilling participants.”

At the intersection of 41st Avenue North and Lyndale Avenue North, the black Kia ran a red light at approximately 100 miles per hour. The Kia narrowly missed a car driven by the victim. Cummings, traveling at 90 miles an hour, entered the intersection and struck the car occupied by the victim at approximately 78 miles per hour, the court papers indicate.

The victim’s view of the intersection was obstructed, the documents state, but he had a green light. He was traveling at approximately 25 miles per hour — the posted speed limit through much of the area where the pursuit unfolded.

Surveillance video from a gas station at the intersection showed a violent crash.

“This collision can be attributed to the Defendant for failure to operate his vehicle with dec regard for the safety of other motorists,” an accident reconstruction report cited in the court documents concluded.

“The Frazier family and our legal team are grateful for the charges brought against Brian Cummings for the reckless killing of Leneal Frazier,” attorney Ben Crump said in a statement. “We commend the Hennepin County Attorney’s Office for having the courage to hold law enforcement accountable in this instance. No innocent civilian should ever lose their life because of unwarranted high-speed chases in residential neighborhoods.”

“This case shines a light on how far we have to go in the pursuit of safe and just policing in America,” Crump continued. “High-speed pursuit policies in Minneapolis and across America must be better written and stringently enforced to protect innocent civilians. This is only the first step in getting full justice for the Frazier family in this tragic and preventable loss.”

NEWS ALERT: @AttorneyCrump & Attorney Jeff Storms have released a statement in response to Hennepin County Attorney’s office announcing that Officer Brian Cummings has been charged with second-degree manslaughter and criminal vehicular homicide in the death of Leneal Frazier. pic.twitter.com/q97uRqiRfF

“Police are supposed to protect and serve citizens, and to act in a manner consistent with their sworn oath to do so. Officer Cummings’ actions deviated from his oath and his negligence caused the death of Leneal Frazier,” Hennepin County Attorney Mike Freeman said in a separate press release. “These charges are appropriate based on the thorough investigation conducted. I hope the victim’s family and loved ones find some solace in knowing we are doing everything we can to get justice for Mr. Frazier.”