‘Police Killed My Uncle’: Darnella Frazier Says Man Who Died in Collision with Minneapolis Police Cruiser Was Her Relative

A driver died in a crash with a Minneapolis police vehicle, and the identity of the victim and his niece adds surreal happenstance on top of the tragedy. He was Leneal Lamont Frazier, his niece Darnella Frazier wrote in a Facebook post. Darnella is the young woman who famously recorded Minneapolis Police Officer Derek Chauvin‘s role in the death of local man George Floyd during a fateful arrest on May 25, 2020 — a death a jury concluded was murder.

“MINNEAPOLIS police killed my uncle,” Darnella Frazier wrote. “MY uncle… Another black man lost his life in the hands of the police!”

Frazier criticized officers for engaging in the chase on a “residential” roadway — a chase which resulted in the police vehicle striking her uncle, who by all accounts was not the subject of the pursuit.  He just happened to be heading in a different direction in the wrong place at the wrong time.

Authorities have not identified the victim in Tuesday’s crash. According to the statement from Minneapolis police spokesman John Elder, an officer found a carjacked vehicle that was linked to “multiple robber[ies] of businesses.”

“The officer initiated a traffic stop on the vehicle,” he wrote in the statement obtained by Law&Crime. “Instead of stopping, the driver fled, and the officer pursued.”

The officer entered the intersection while going northbound on Lyndale Avenue at 41st Avenue North but crashed with a vehicle that was heading west.

“As the officer entered the intersection travelling [sic] northbound on Lyndale Avenue at 41st Avenue North, he collided with a vehicle that was travelling [sic] westbound. A southbound vehicle was also involved in the crash,” Elder wrote. “Two people, the Officer and the driver of the westbound vehicle, were transported to North Memorial Medical Center by ambulances. The officer was treated for serious but non-life-threatening injuries. The other driver died shortly after arriving at the hospital.”

Bad crash involving a MPD squad at the intersection of Lyndale & Washington. Few details so far about what happened. pic.twitter.com/Kgk3x2uEBW

This victim was Frazier’s uncle Leneal, according to her story. The Medical Examiner’s Office has neither released his name nor the official cause or manner of death.

Frazier’s recording of Floyd’s death contradicted the initial police description of what occurred in 2020.  The original police version of events did not describe Chauvin kneeling on the man’s neck.

Floyd was also Black, and his death added to a fraught national debate on the precise role of police in society, and how they interact with people of color. Now Frazier blames Minneapolis police for killing her uncle.

“Minneapolis police has cost my whole family a big loss . . . today has been a day full of heartbreak and sadness,” she continued.  “We went to the spot he was killed at and put beautiful flowers and candles, but even thats [sic] not enough to bring him back.  It’s not fair how the police can just go around killing people.” 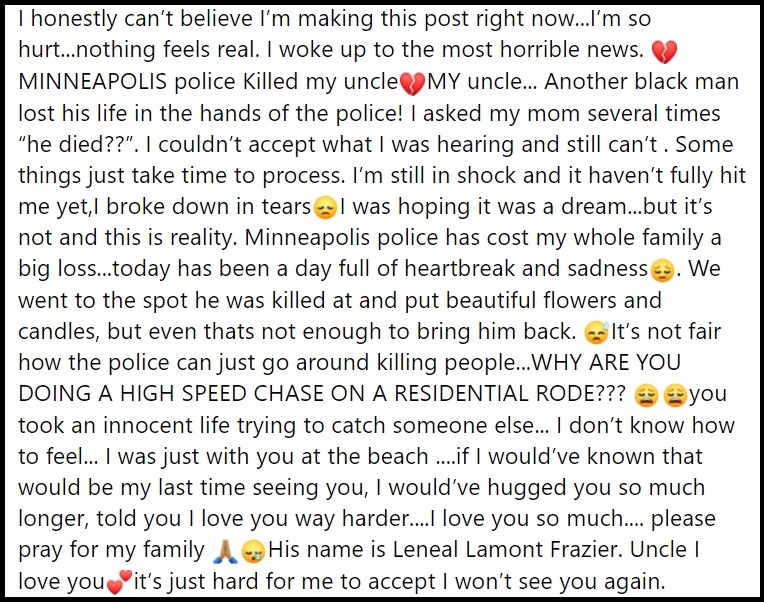