After a U.S. District judge issued an order on Wednesday denying the government’s request to redact search warrants related to Michael Cohen’s prosecution for campaign finance violations in the Southern District of New York (SDNY), the documents went public as expected at 11 a.m. on Thursday.

SDNY prosecutors had requested to redact certain materials now that the hush payment investigation has wrapped up, but Judge William Pauley denied that request, saying that the public had a right to know what what was in those search warrants dating back to April 2018. That was when authorities raided Cohen’s home, office and hotel room.

“After reviewing the Government’s status report and proposed redactions, this Court denies the Government’s request. In particular—and in contrast to the private nature of Cohen’s business transactions—the weighty public ramifications of the conduct described in the campaign finance portions warrant disclosure,” Judge Pauley said. “The campaign finance violations discussed in the Materials are a matter of national importance. Now that the Government’s investigation into those violations has concluded, it is time that every American has an opportunity to scrutinize the Materials.”

There were 9 exhibits filed on the docket, spanning hundreds of pages. 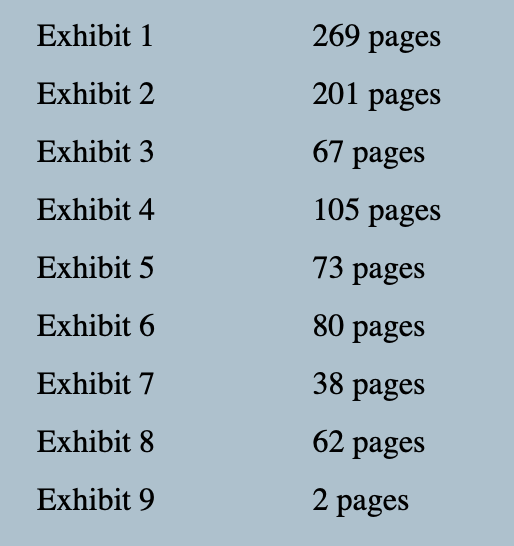 Exhibit one, the lengthiest of them all, dove right into the campaign finance aspects of the probe, including the Team Trump response to the infamous “grab ’em” Access Hollywood tape, plus the behind the scenes catch-and-kill maneuverings regarding Stormy Daniels’ and Karen McDougal’s alleged affairs with Trump.

Probable cause that Cohen made illicit payment to influence election. 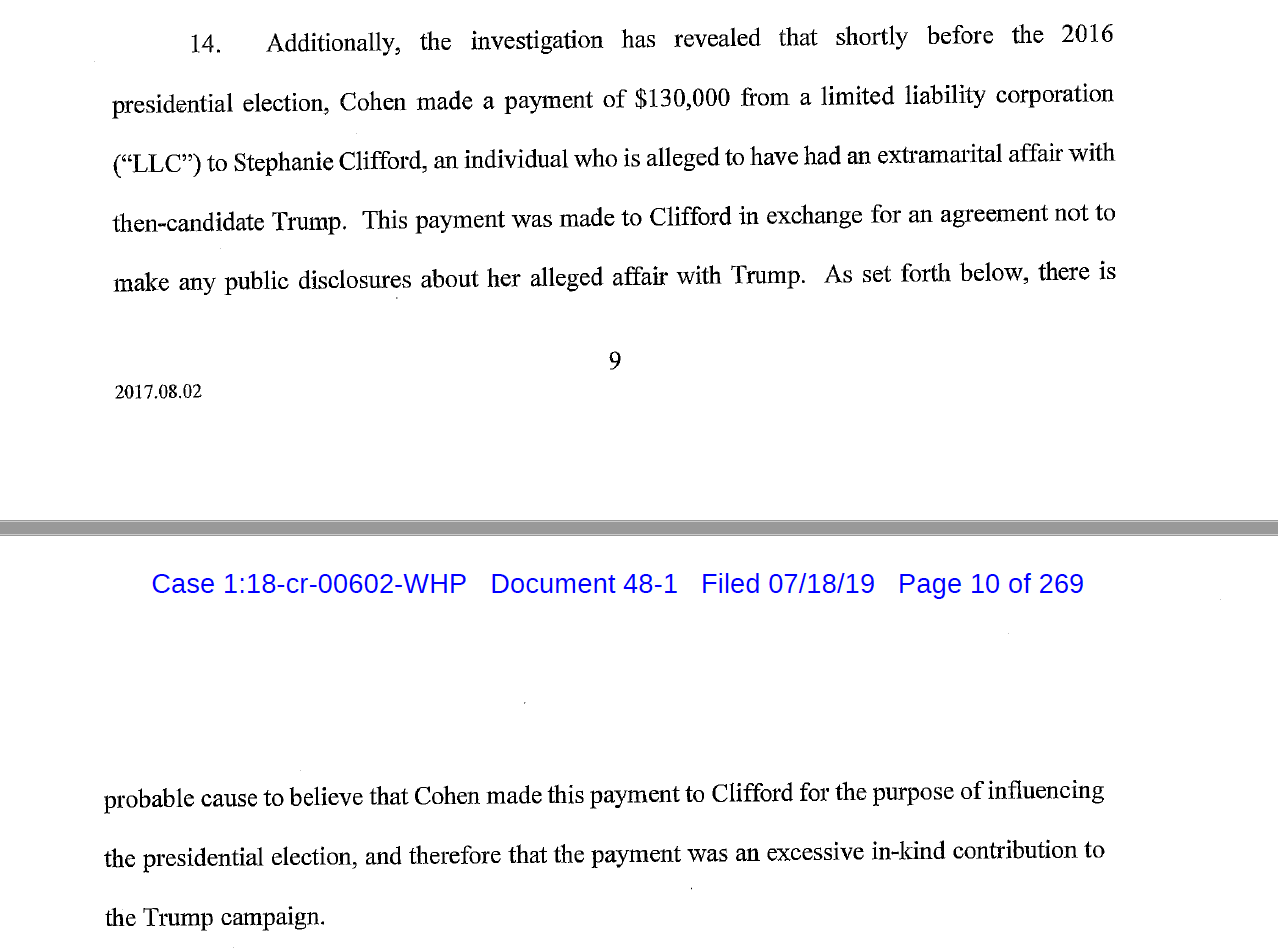 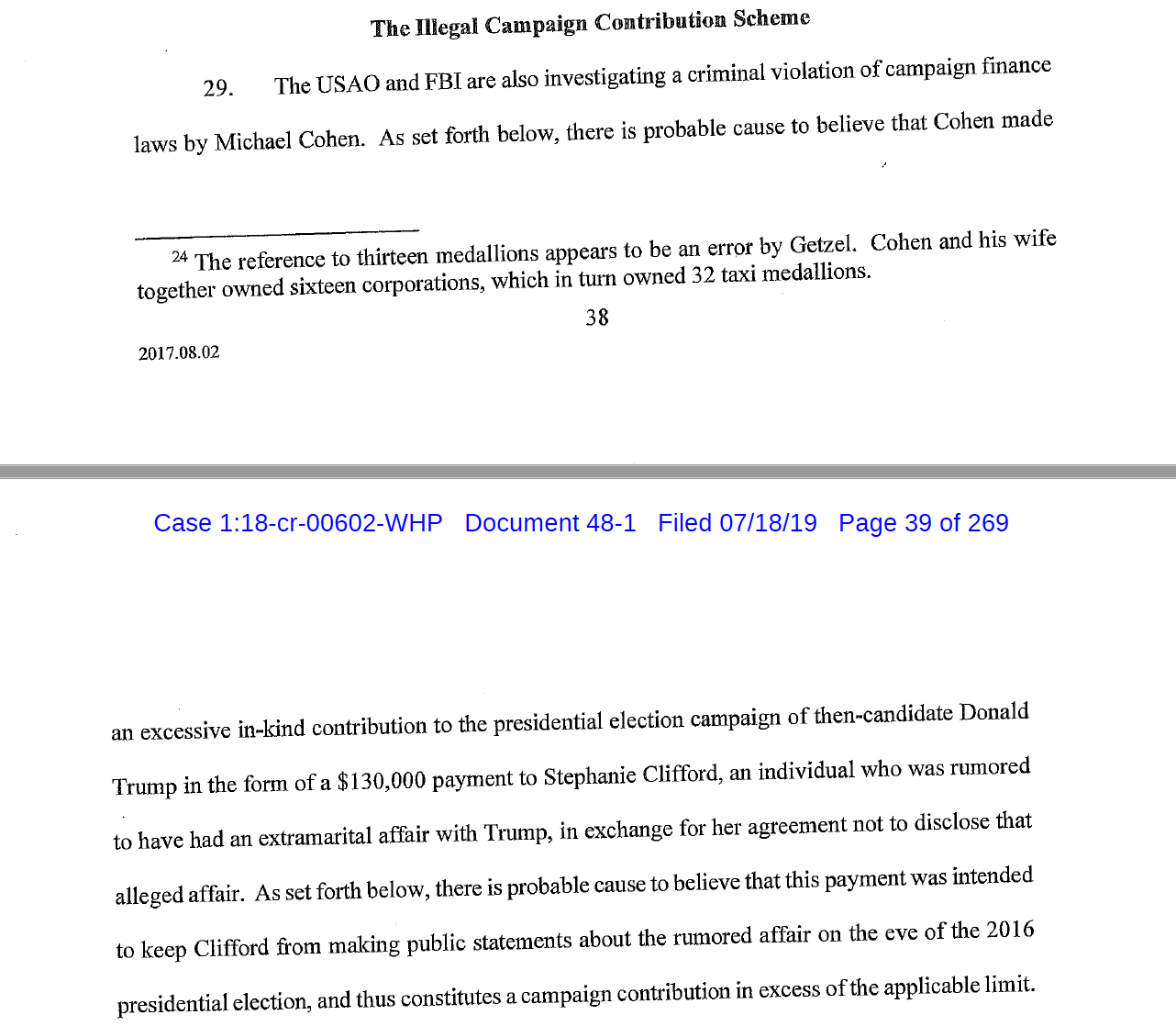 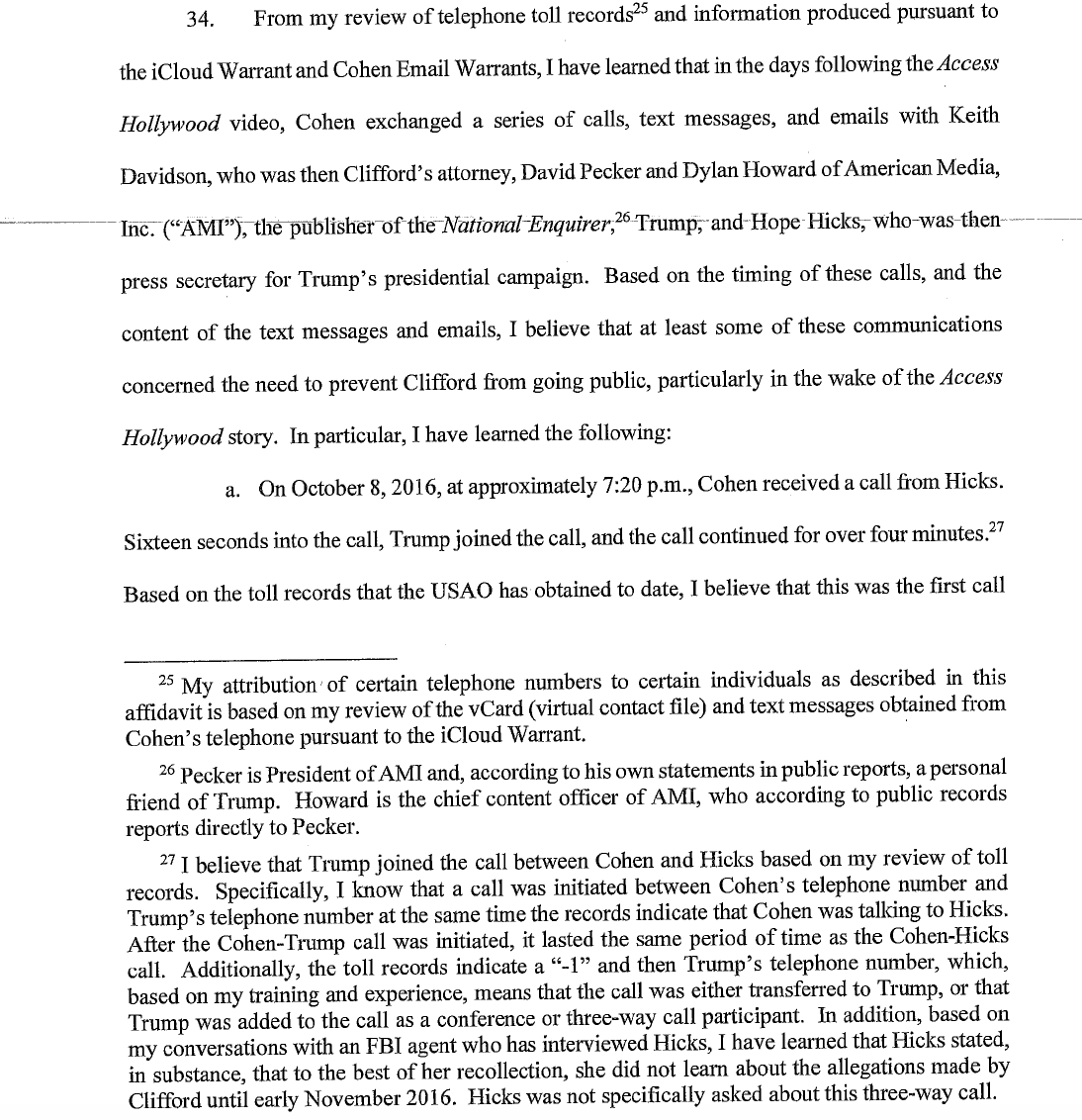 Cohen and Trump spoke for about 8 minutes after a call with David Pecker on the Stormy Daniels situation. 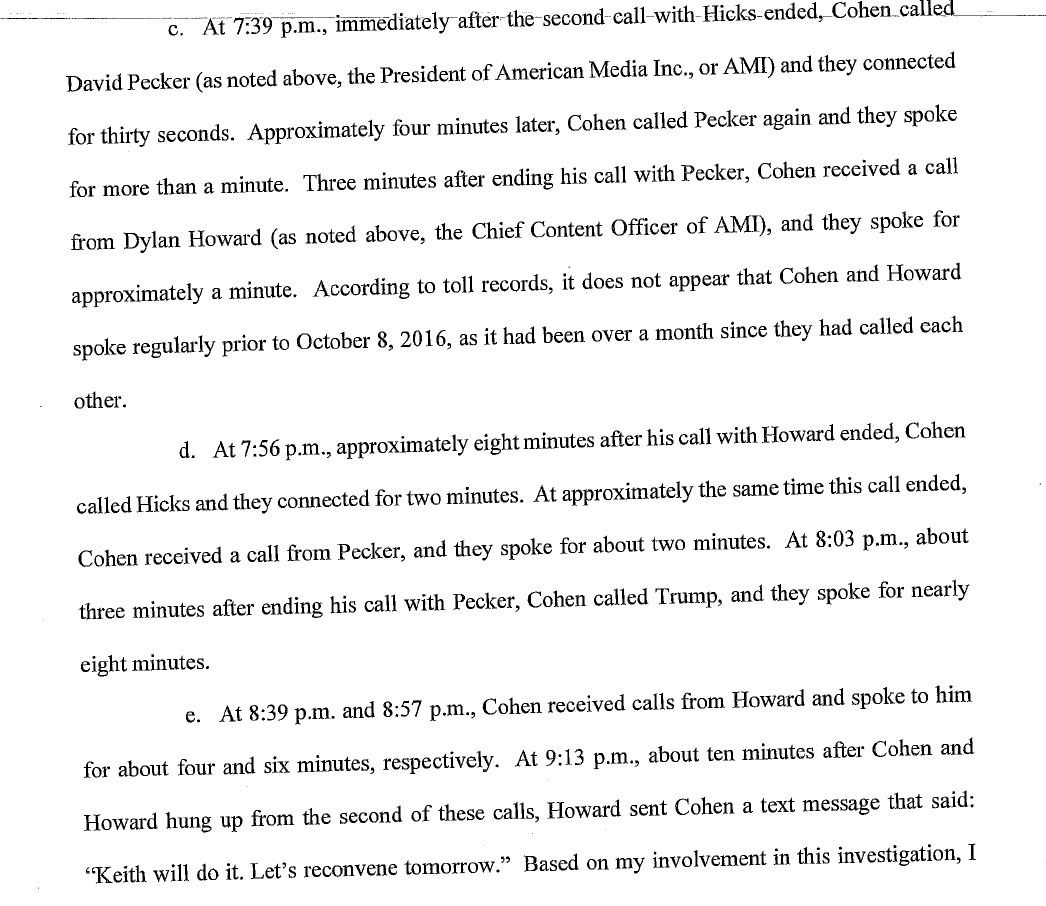 “We just need her to disappear”: the McDougal situation gets worrisome, days before the 2016 election. 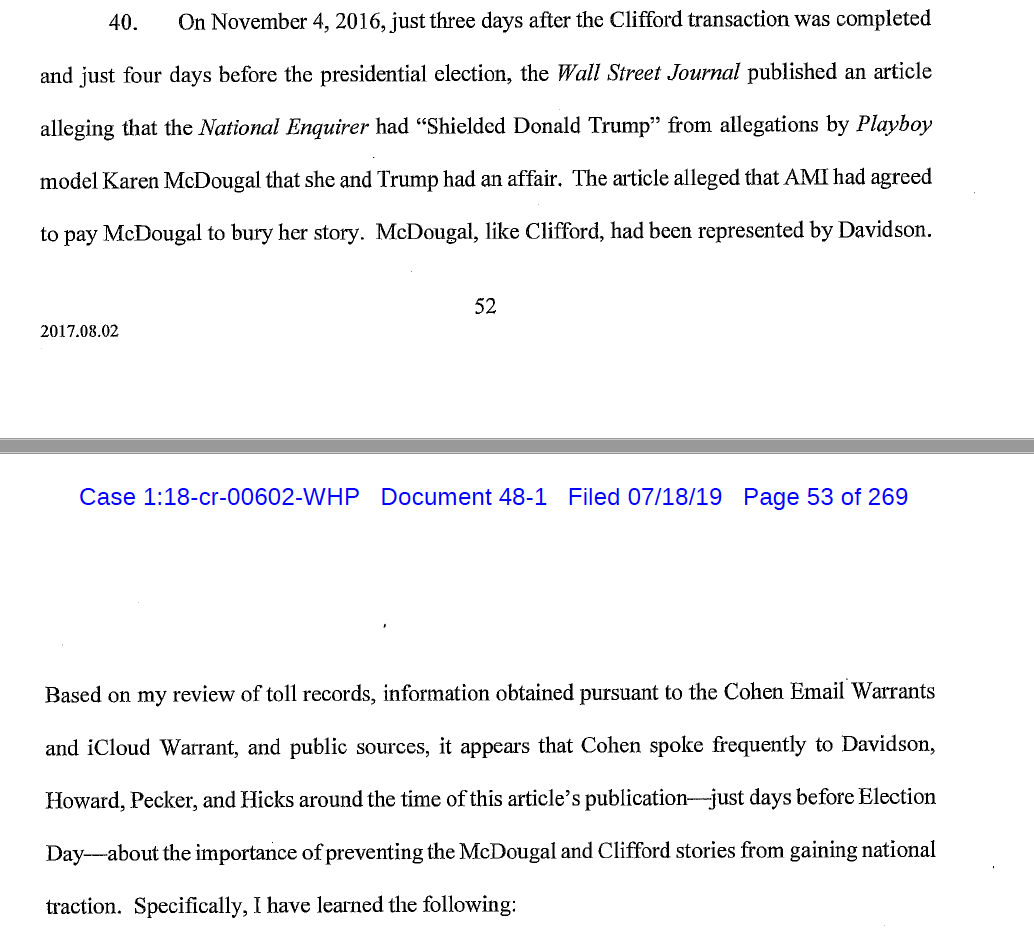 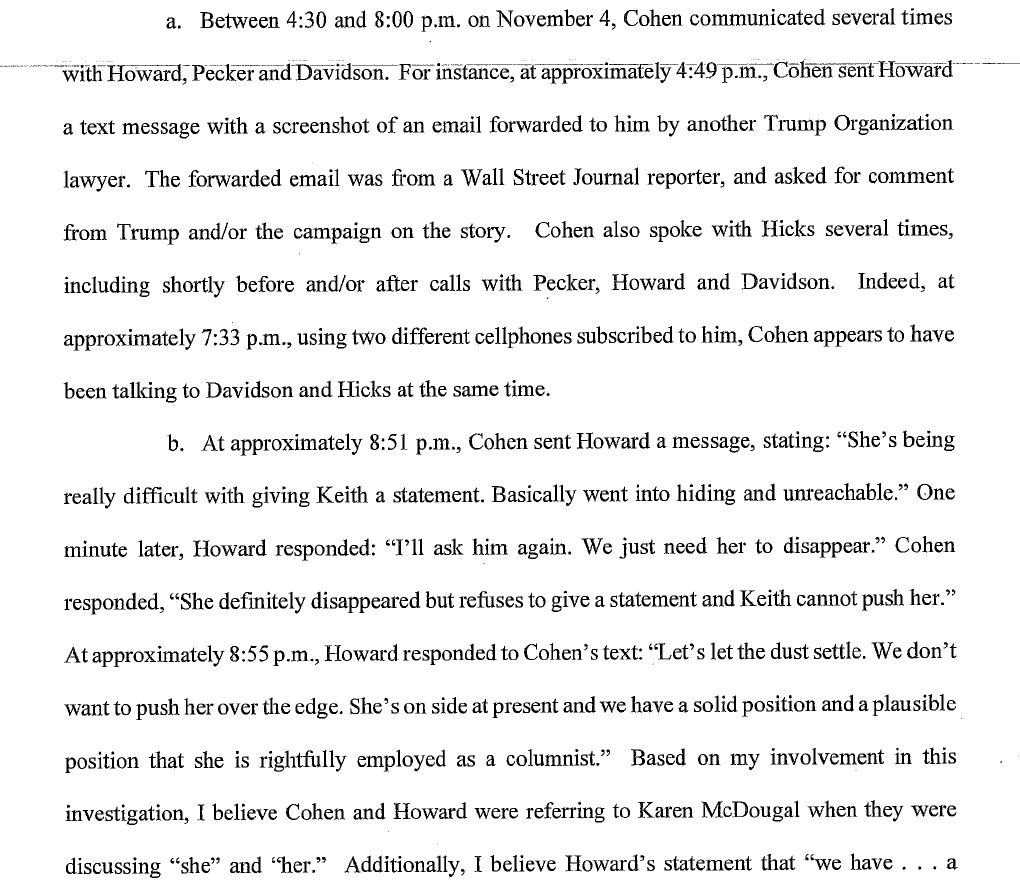 Trump was “pissed.” Everybody was pissed. 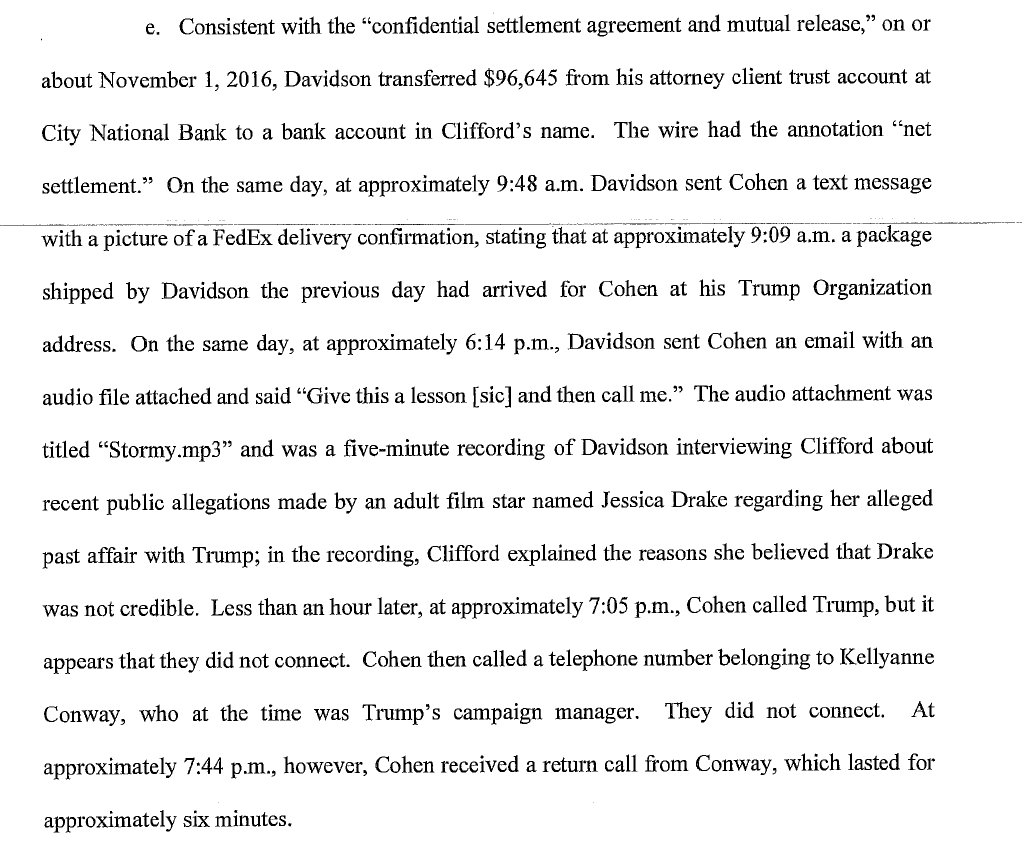 “Keep praying!! It’s working”: Hope Hicks prayed no one would care about WSJ’s affair story; CNN’s lack of coverage was cited by Cohen as a good sign. 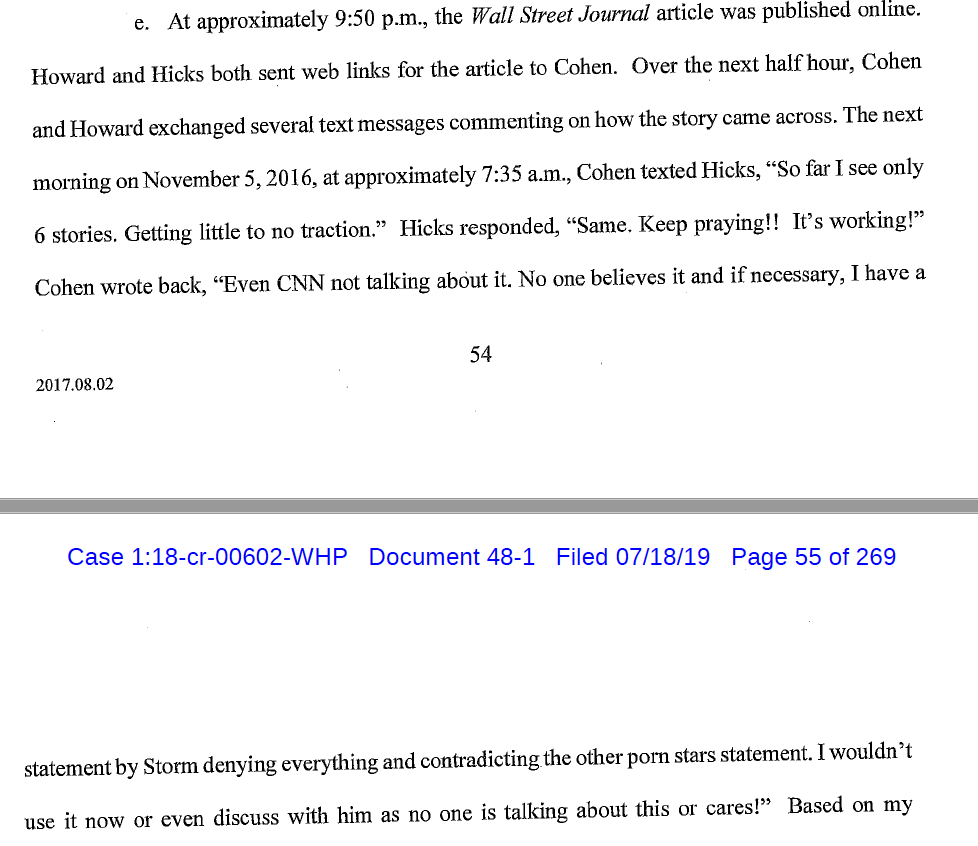 What all of this indicated to the investigator. 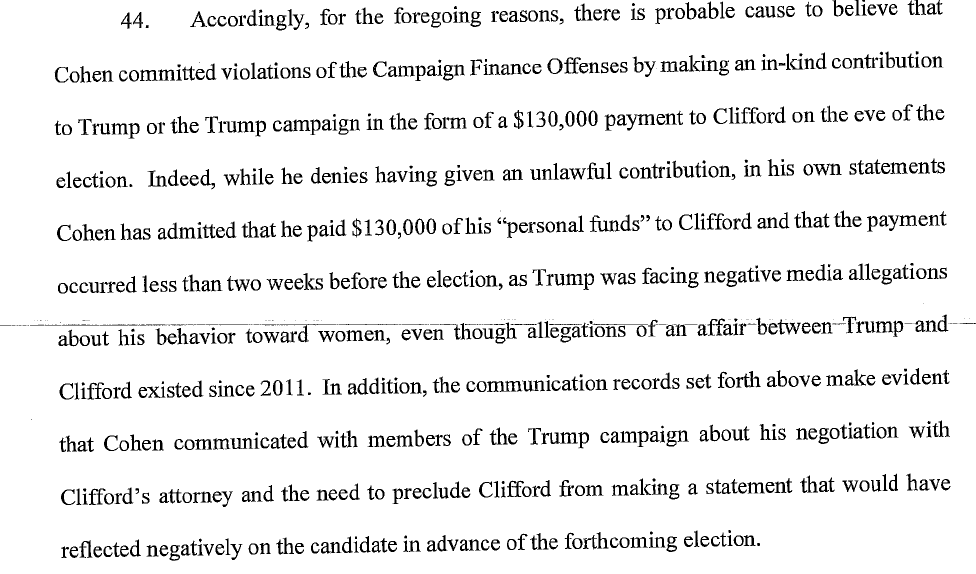 Cohen said in court that then-candidate Trump “directed him” to make the hush payments. Trump was referred to as “Individual-1” in SDNY filings.

Cohen attorney Lanny Davis was not pleased that his client was the only one to do time.

“Case closed? Why is Michael Cohen — after all his voluntary cooperation and testimony that Mr. Mueller said was credible and went to ‘core issues’ and all the information and documents he voluntarily provided to prosecutors and to congress — the only member of the Trump company to be prosecuted and imprisoned?” Davis asked. “Especially since prosecutors found that virtually all of Michael’s admitted crimes were done at the direction of and for the benefit of Donald Trump? Why?”

Cohen himself made a statement after the docs went public.

As I stated in my opening testimony, I and members of The Trump Organization were directed by Mr. Trump to handle the Stormy Daniels matter; including making the hush money payment,” he said. “The conclusion of the investigation exonerating The Trump Organization’s role should be of great concern to the American people and investigated by Congress and The Department of Justice.”

“We are pleased that the investigation surrounding these ridiculous campaign finance allegations is now closed,” Sekulow said on Thursday. “We have maintained from the outset that the president never engaged in any campaign finance violation.”

Portions of the Cohen search warrants were unsealed before, but much of that information was redacted.