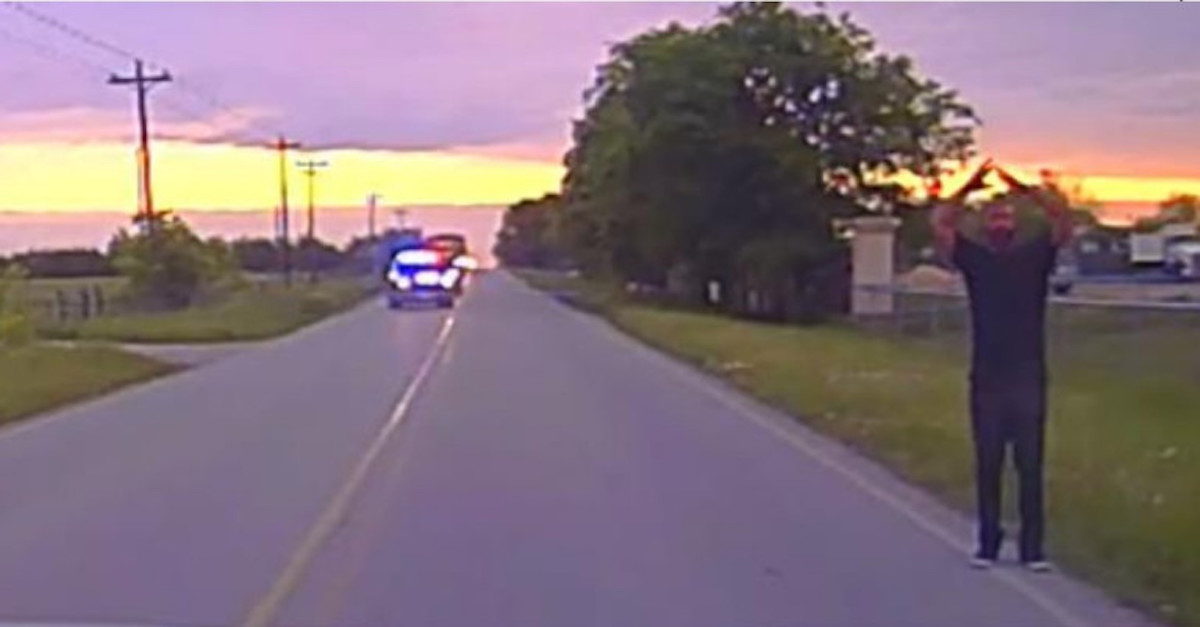 Stephen Nicholas Broderick, from dashcam video of a responding officer.

Authorities in Austin, Texas have arrested the former law enforcement officer who is suspected of committing a triple homicide on Sunday near Great Hills Trail and Rain Creek Parkway. This arrest followed a wide-scale manhunt that lasted nearly a full day.

KXAN reported that the Travis County Sheriff’s Office and Manor Police Department confirmed that Stephen Nicholas Broderick, 41, was taken into custody without incident between 7 a.m. and 7:40 a.m. on Monday. Broderick, a former Travis County sheriff’s deputy, had a loaded handgun tucked into the waistband of his pants at the time of the arrest, Manor Police said.

Authorities have not released the identities of the victims in Sunday’s shooting, but Ricardo Reyes, the principal of Elgin High School in Austin, confirmed that current and former students were among the three victims—senior Willie Simmons III, a recent football signee of the University of North Texas, and Alyssa Broderick, a former member of the girls basketball team. They were a couple.

We’re learning the names of the 3 people killed by a former Travis County detective Sunday.

“Our sincere condolences go out to the families and friends of these fine young adults,” Reyes said in a statement. “As we move forward during this time of grief, please keep your thoughts and prayers with the families impacted by this tragedy.”

Alyssa Broderick’s mother, Amanda Broderick, was reportedly the third victim. She was the suspect’s ex-wife.

After receiving two 911 calls on Monday reporting a suspicious man matching Broderick’s description walking down Old Kimbo Road between the cities of Manor and Elgin, a Manor police officer responded to the scene and “conducted a high-risk stop,” per KXAN. The Manor Police Department also released dashcam video showing the officer approaching Broderick, who can be seen standing on the side of the road wearing a black tee shirt and jeans.

Broderick was found approximately 20 miles from the scene where Sunday’s shooting took place.

“I’m truly heartbroken that a former Travis County Sheriff’s Office Deputy is the suspect in such a horrific incident. TCSO is standing by to provide any, and all assistance we can to the families of the victims in their time of need,” Travis County Sheriff Sally Hernandez said in a statement following the arrets. “I’m proud of the integrity and professionalism shown by the men and women of TCSO, APD and other law enforcement agencies, who worked tirelessly throughout the night to locate Stephen Broderick. I’m especially grateful to the vigilant citizen who called 911 after seeing Broderick, and to the Manor PD officers and TCSO deputies who took him into custody this morning.”

Stephen Broderick in June 2020 was arrested and charged for sexually assaulting a child — reportedly his daughter. Per KVUE:

He had an ankle monitor when he was released following the June 2020 charge, but it was later taken off.

Broderick’s lawyer argued that Broderick had worn the monitor for 142 days with no substantial violations and that it should be removed. A state district judge agreed, which left him unsupervised months after his daughter and wife stated they feared for their safety with him released from jail.

He was then released on $50,000 bond and proceeded to resign from his position as a property crimes detective with the sheriff’s office. Both Alyssa and Amanda Broderick said they were afraid Stephen Broderick would harm them.

“I felt safe after my dad had been arrested and he was in jail, but now that he’s out I don’t feel safe,” Alyssa reportedly wrote in a protective order application. “I’m afraid that to him, a protective order will be just a piece of paper. I’m worried that he’ll come after my family … I’m afraid that he might hurt me or my mom.” Amanda Broderick also said she feared Stephen Broderick would “hurt me or my children, because these [sexual assault] allegations have come out and he may lose his career.”

“Stephen has prior military experience and is SWAT trained. If he wanted to hurt someone, he would know how,” Amanda said, according to KVUE.