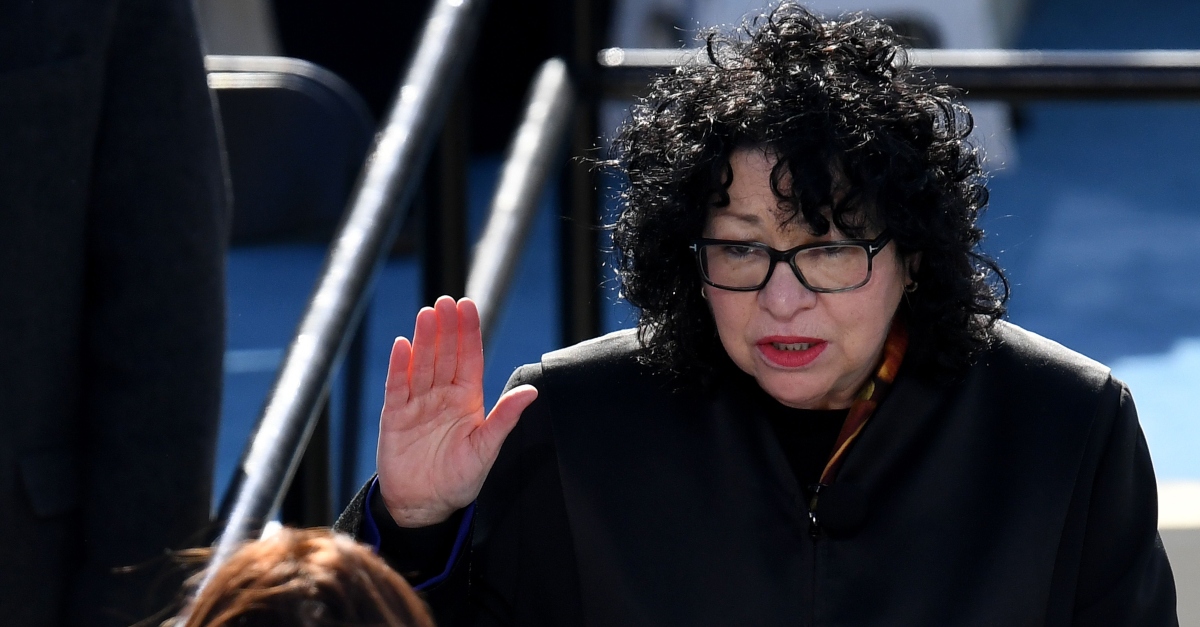 The Supreme Court issued orders in various cases on Monday morning. Justice Sonia Sotomayor was the lone member to dissent in a case where the facts have been described as “appalling” due to the shackling of a criminal defendant in full view of a jury.

Frederick Whatley was convicted of murder in 2009. But he disputed the version of events that led him to kill a bait shop and liquor store owner in Georgia. According to the state, Whatley attempted to execute the witnesses after an armed robbery. To hear Whatley tell it, he reflexively fired after the owner pulled a gun on him–leading to a chase and shootout in which the store owner died.

The factual dispute, however, was only of ancillary importance by the time Whatley was telling his version of the story. He had already been convicted and was trying to rehabilitate his image because the state wanted to portray him as remorseless and therefore deserving of the death penalty. The prosecution succeeded. Whatley was sentenced to death despite the best efforts of his friends and family.

On appeal, Whatley claimed his defense attorney had not turned in their best effort. Specifically, the death row inmate claimed, his attorney had unconstitutionally allowed him to testify in ways fatally prejudicial to his own defense–raising ineffective assistance of counsel concerns implicating the Sixth and Fourteenth Amendments.

That allegedly prejudicial testimony occurred while Whatley was “wearing unnecessary leg irons and manacles,” Sotomayor explains. More to the point, the dissent notes, Whatley’s “attorney waved away the prosecutor’s concerns about the visible shackles, then sat silent when the prosecutor handed Whatley a fake gun and asked him to reenact the murder for which he had just been convicted.”

Sotomayor goes on to note that Whatley’s “criminal history was relatively minor and largely from his teenage years,” essentially attributing the death sentence to the sentencing phase performance that the convicted man’s own attorney allowed to happen despite the prosecutor acknowledging concerns about the impact of visible shackling.

Chains paint a defendant as an immediate threat. Jurors faced with a defendant in shackles will find it more difficult to consider the defendant as a whole person and to weigh mitigating evidence impartially. If jurors think the court does not trust a capital defendant to avoid violence at his own sentencing proceeding, with his life on the line, they are unlikely to trust him to do so while serving a life sentence with no hope of parole.

Sotomayor’s basic argument is contained in a footnote which reads, in relevant part: “Indeed, the prosecutor himself suggested that the court excuse the jury so Whatley could take the stand outside their presence, thus hiding his chains. Certainly, a reasonable defense attorney would not have taken it upon himself to overrule the prosecutor’s objection to the defendant’s unfair treatment.”

Far from just Sotomayor’s personal concerns with chains and shackles on criminal defendants, the nation’s high court has repeatedly ruled in the past that visible shackling on criminal defendants invites extreme skepticism and is often presumptively unconstitutional–in violation of the Fifth and 14th Amendments.

But the court ultimately declined to hear Whatley’s case. The discrete issue of whether it is unconstitutional for a convicted murderer to appear in chains during the sentencing phase of a trial was not directly implicated by previous court decisions and Whatley’s petition was premised on the Sixth, not the Fifth, Amendment.

Sotomayor would have overturned the death sentence.

“[D]efense counsel’s failure to object to Whatley’s unnecessary shackling renders his death sentence not only unreliable, but unconstitutional.” the dissent concludes. “The only way to conclude otherwise is to disregard this Court’s clear precedent about the likely effect of visible, unnecessary shackling. Because I would not allow the State to put Frederick Whatley to death based on such a constitutionally flawed sentencing proceeding, I respectfully dissent.”