MAGABomber’s Lawyers Detail the ‘Darkness’ Behind His ‘Infatuation’ with Trump 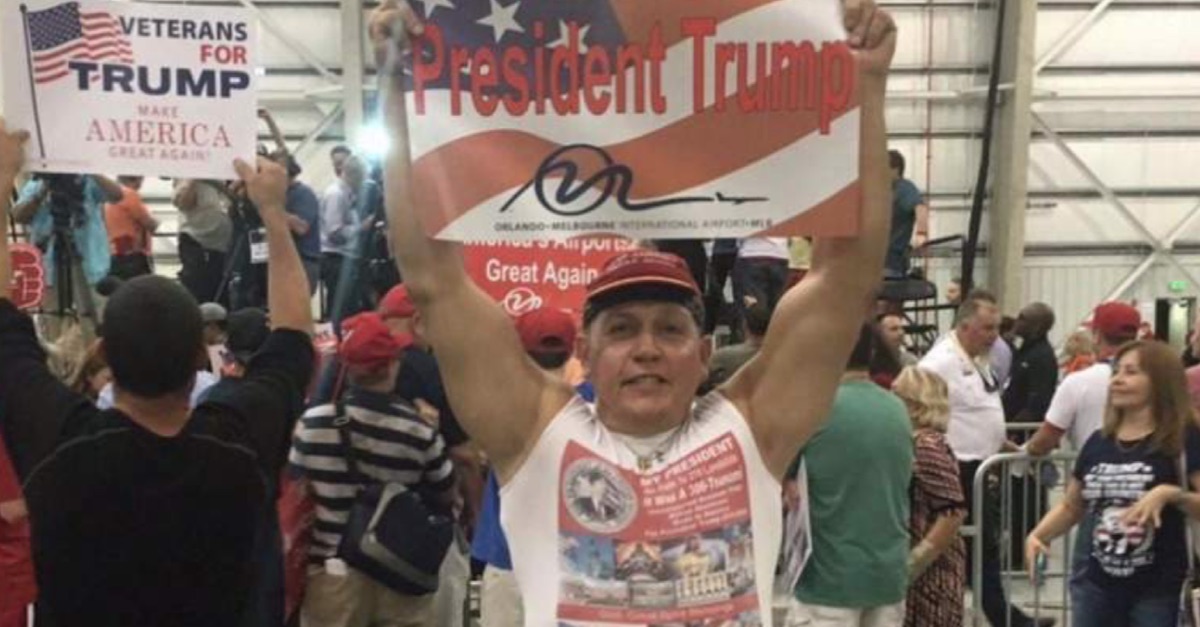 Attorneys with the Federal Defenders office representing Cesar Altieri Sayoc, the 57-year-old Florida man dubbed the MAGABomber, put together a lengthy sentencing submission that was filed on Monday, detailing the “darkness” that led Sayoc to become “infatuated” with President Donald Trump.

Sayoc pleaded guilty in March to a whopping 65 counts for: using a weapon of mass destruction, interstate transportation of an explosive, sending threatening interstate communications, illegal mailing of explosives, and using an explosive to commit a felony. When Sayoc’s arrest was first announced, U.S. Attorney for the Southern District of New York Geoffrey Berman called the bomb mailings “cowardly and reprehensible,” adding that such conduct is “anathema” to democracy.

In the Monday letter, Sayoc’s attorneys began by describing the “series of traumatic events pushed Cesar Sayoc further and further into the margins of society”:

Kind-hearted and eager to please, Mr. Sayoc was born with cognitive limitations and severe learning disabilities that made it difficult for him to maintain relationships and succeed in school. As a boy, he was abandoned by his father and sexually abused by a teacher at his Catholic school. As a man, he became increasingly estranged from his family and dependent on drugs, particularly steroids. He lost everything in the Great Recession. By 2018, he was living alone in a decrepit and cramped van that had been his home for more than a decade. A typical day saw Mr. Sayoc waking up in his van, showering at the gym, and cooking crockpot meals while inside the DJ booth of a strip club before heading off to his second job delivering pizza. As he grew older and more isolated, excessive steroid use increased his feelings of anxiety and paranoia.

Sayoc attorneys said it was “[i]n this darkness” that Sayoc “found light in Donald J. Trump.” They said Sayoc watched Fox News “religiously,” watching Fox and Friends in the morning and Hannity at night.

“His infatuation with the President began as something personal, not political. When he was most down, Mr. Sayoc relied on self-help books on tape to keep going. Donald Trump’s books on success and business were his favorites,” the attorneys said. “Mr. Sayoc was an ardent Trump fan and, when Trump announced he was running for President, Mr. Sayoc enthusiastically supported him. He began watching Fox News religiously at the gym, planning his morning workout to coincide with Fox and Friends and his evenings to dovetail with Hannity.”

Sayoc’s lawyers said the defendant was “enthusiastic and credulous,” and that his “cognitive limitations and mental illness” made him prone to believing “outlandish reports in the news and on social media, which increasingly made him unhinged.”

“He became obsessed with ‘attacks’ from those he perceived as Trump’s enemies,” they added.

Sayoc attorneys said their client now “understands how deeply wrong his actions were, and he is truly sorry for sending these packages.” They said that Sayoc “constructed devices designed to look like pipe bombs and mailed them to prominent Democrats,” believing in his mind that he was “sending a hoax device.”

Although Sayoc was “not especially political” over the course of his life, the attorneys said, Sayoc found a “calling for the first time in years” when Trump announced he was running for president [citations removed]:

Mr. Sayoc viewed Donald Trump as everything he wanted to be: self-made, successful, and a “playboy.” He listened to titles such as Think like a Billionaire: Everything You Need to Know about Success, Real Estate, and Life and Trump: How to Get Rich. The tapes helped Mr. Sayoc dream of a better life and motivated him to keep going. He pushed himself to work multiple jobs at once to get back on his feet. He followed Donald Trump’s career, watched his television shows, purchased Trump-branded products, and attended a Trump-sponsored career coaching event in South Florida. He was a Donald Trump super-fan.

Then, Donald Trump decided to run for President. This decision had a profound effect on Mr. Sayoc—he found a calling for the first time in years. Before 2015, Mr. Sayoc was not especially political. He did not vote, volunteer for candidates, go to political rallies, or follow most political issues. Old friends, acquaintances, and family members do not remember him ever speaking to them about political issues or politicians. But when Donald Trump announced his candidacy, Mr. Sayoc came to view Trump as a personal champion—someone who had helped him through the most difficult periods of his life and who could do the same for other people across the country. He threw himself into the campaign by attending rallies, passing out flyers, and covering his van in pro-Trump stickers, including some that he had custom printed.

They said Sayoc was an “avid follower of @RealDonaldTrump, Donald Trump’s Twitter page, where Trump posted prolifically about his political enemies, including all of the recipients of Mr. Sayoc’s mailings.”

“In his tweets, Trump portrayed these individuals as dangerous, corrupt, and un-American,” the attorneys continued. “For example, he suggested that anti-Trump protestors were paid agents of billionaire George Soros and that Hillary Clinton should be prosecuted for corruption and put in jail.”

“Mr. Sayoc was particularly susceptible to believing these dubious stories of Democratic malfeasance. The combination of his cognitive deficiencies, steroid-induced delusional thinking, political naiveté, and his isolation resulted in Mr. Sayoc being unable to critically evaluate these claims,” they added.

They said that Sayoc’s political obsession led him to mail 16 packages “designed to look like pipe bombs” to “scare, intimidate, and emotionally injure” perceived Trump enemies. They said he only wanted to scare them but didn’t actually think the devices could harm anyone physically.

“Using the internet, Mr. Sayoc researched what mail bombs looked like and how they were made. He constructed crude devices that were roughly 6 inches long, slightly larger than a pen,” the defense attorneys continued. “Mr. Sayoc took wires from the clock and ran them into the pipe. But this was for show: the wires were not actually connected to anything that could ignite and the digital clock was not set—it still had the factory sticker over its face simulating a time display.”

As a result of all above-described detail regarding Sayoc’s upbringing, mental state, and the lack of actual physical injury–plus other factors–the federal public defenders asked that Sayoc be sentenced to 121 months behind bars to be followed by a “substantial period of community supervision.”

You can read their sentencing submission in full below. He is scheduled to be sentenced on Aug. 5.