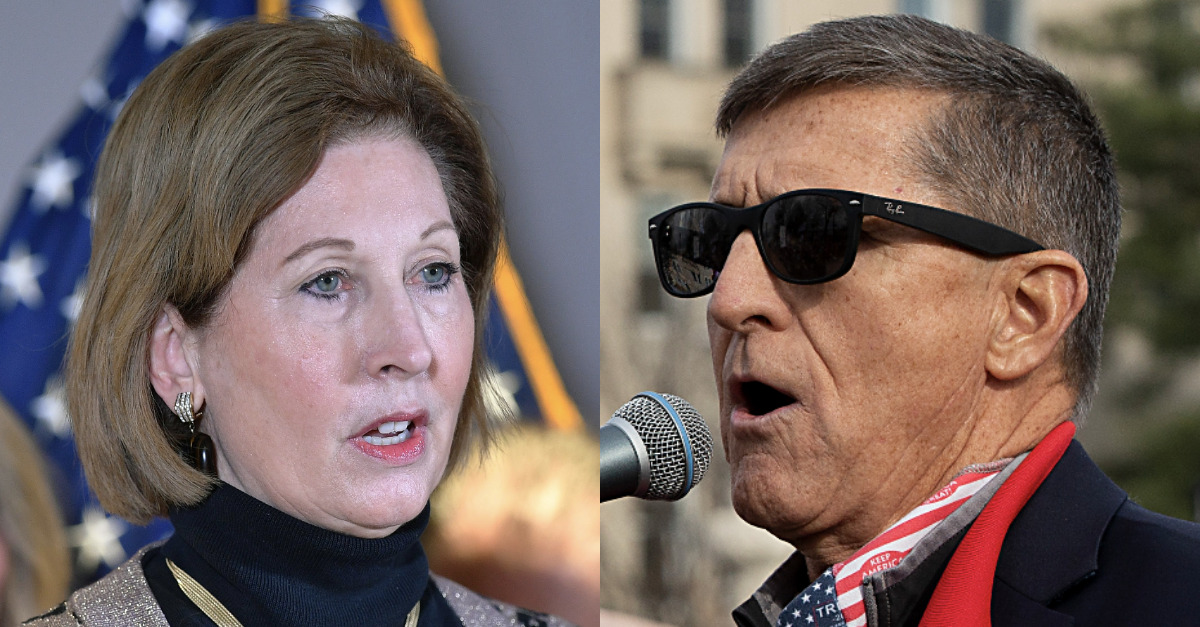 “The accounts have been suspended in line with our policy on Coordinated Harmful Activity,” a Twitter spokesperson said in a statement. “We’ve been clear that we will take strong enforcement action on behavior that has the potential to lead to offline harm, and given the renewed potential for violence surrounding this type of behavior in the coming days, we will permanently suspend accounts that are solely dedicated to sharing QAnon content.”

Flynn, the former White House national security advisor and his lawyer, Powell, however, did not use their Twitter accounts “solely” for the purposes of sharing QAnon content–though both of them were heavily supported with the popular conspiracy theory movement.

Law&Crime reached out to Twitter support for comment and clarification on the decision to finally eject Flynn and Powell from their platform, but no response was forthcoming at the time of publication.

Powell, of late, largely used her social media accounts to promote her electoral fraud claims and so-called “Kraken” lawsuits which aimed to overturn the results of the 2020 election. Each of those lawsuits failed at every turn and contained several fanciful and unsubstantiated claims regarding alleged electoral shenanigans.

While representing Mr. Flynn, Ms. Powell also used her media appearances to amplify social media posts promoting QAnon, the baseless conspiracy theory whose proponents believe Mr. Trump is battling a cabal of satanic pedophiles. But this approach did not hurt her in the eyes of the president’s defenders, including Attorney General William P. Barr. After her attempts to get the Flynn case dismissed failed, Mr. Barr agreed to appoint a U.S. attorney to review the case, a step that ultimately led him to direct the Justice Department to drop the charges against her client.

Flynn largely used his account to air generalized grievances about the integrity of the election–infamously advising President Donald Trump in December of last year to “declare limited Martial Law to temporarily suspend the Constitution and civilian control of these federal elections in order to have the military implement a national re-vote that reflects the true will of the people.”

The Trumpworld favorite was involved in a passion play among the MAGA before recently being pardoned by the 45th president. Flynn was unceremoniously fired by Trump early on during the latter’s nascent presidential administration for allegedly lying to Vice President Mike Pence. Former special counsel Robert Mueller later moved to charge Flynn for lying to the FBI during his Russiagate investigation. Barr eventually intervened on Flynn’s behalf, and the charges against him were dropped by the U.S. Department of Justice. U.S. District Judge Emmet T. Sullivan refused to play along — prompting a long-and-drawn-out legal battle in which Flynn was represented by Powell. Trump’s late November pardon put the kibosh on that showdown.

Flynn has been seen as a hero in the QAnon movement ever since he tweeted a video in July of him standing in a back yard with his family taking a generic oath of office before ending with “where we go one we go all,” the main slogan of the QAnon theory. It is often abbreviated to WWG1WGA.

His tweet included the hashtag #TakeTheOath, which is used by other followers of the QAnon movement when posting similar videos of them expressing their support on social media.

Trump’s supporters reacted furiously to Flynn’s Twitter suspension–with many of them questioning why they would still use Twitter after the purge.

Those shared grievances and disgust at the technology platform for moderating content in line with their terms of service were drastically amplified late Friday evening when Trump himself was permanently given the boot after violating the company’s Glorification of Violence policy. Twitter surveyed the president’s recent tweets and found that continued presidential posts would risk the “further incitement of violence” in the aftermath of the January 6 attack on the U.S. Capitol Complex.

Hi, the president can release statements via the White House anytime he wants. Just FYI.

Before Trump’s suspension consumed all media reporting on Twitter for the foreseeable future, thousands of QAnon-boosting-and-adjacent accounts were summarily banned–a move that will likely have deep and lasting repercussions on the website’s user base and the nature of political discourse in the United States.

The QAnon conspiracy theory has gained a substantial toehold among GOP voters across the country and is by no means a marginal set of beliefs. According to a September 2020 opinion poll, 56% of Republican Party voters believe that the claims espoused by the far-right conspiracy theory are true to some degree.