Lawyers File Motion to Get Chelsea Manning Out of Jail: Sanctions Have ‘Exceeded Their Lawful Scope’ 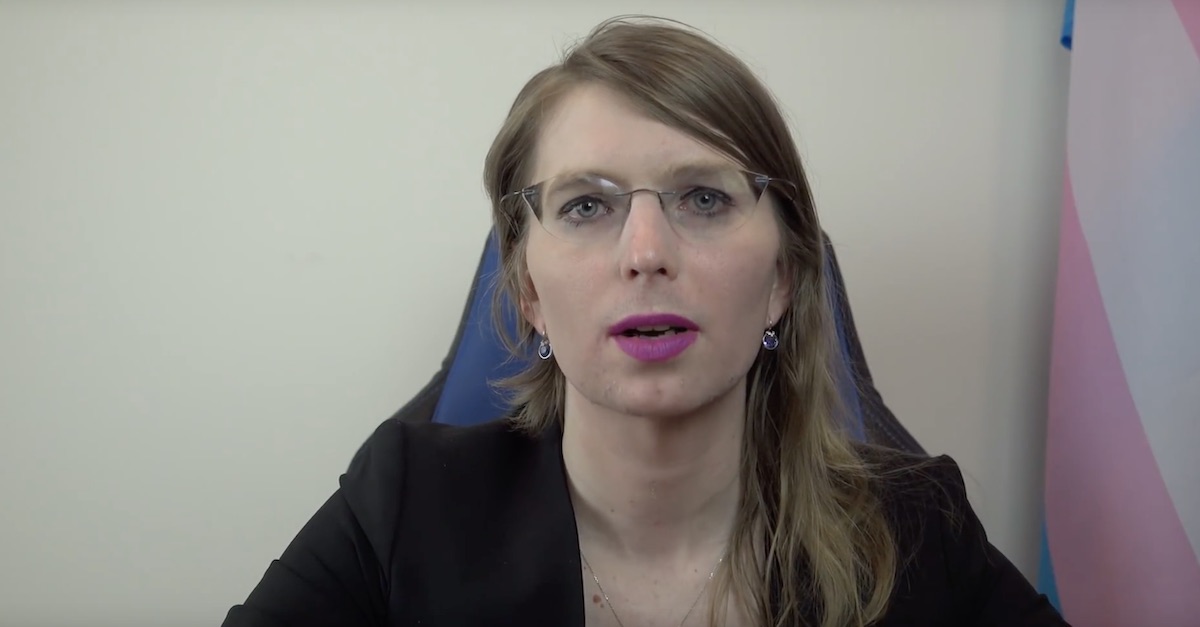 The government has kept Chelsea Manning locked up for nearly a year, but Manning’s legal team is attempting to bring that to an end. In a Wednesday motion filed in the Eastern District of Virginia, the lawyers made their case.

In a press release accompanying the filing, Manning’s lawyers note that she has been behind bars since last May and racks up $1,000-per-day in fines, meaning the fines now total $230,000. Manning has repeatedly said that she refuses to cooperate with the government’s demand that she testify before a grand jury investigating WikiLeaks founder Julian Assange.

Manning is largely remembered as the former U.S. Army intelligence analyst who was infamously convicted of violating the Espionage Act by disclosing thousands of “classified (and unclassified but ‘sensitive’) documents” to WikiLeaks. Barack Obama commuted Manning’s sentence in one of his last acts as president.

Manning’s attorney Moira Meltzer-Cohen said what’s being done to her client is in “violation of the law.”

“A witness who refuses to cooperate with a grand jury subpoena may be held in contempt of court, and fined or incarcerated. The only permissible purpose for sanctions under the civil contempt statute is to coerce a witness to comply with the subpoena,” Meltzer-Cohen said in a statement obtained by Law&Crime. “If compliance is impossible, either because the grand jury is no longer in existence, or because the witness is incoercible, then confinement has been transformed from a coercive into a punitive sanction, and thus is in violation of the law.”

The legal team argues that Manning is not coercible and so her stay behind bars must be ended immediately. The sanctionshave “exceeded their lawful scope, and must be terminated,” they argue:

All evidence suggests that she is a deeply principled woman, who has suffered, expects to suffer, and is prepared to suffer for her principles, whether she is in or out of jail. Whatever one may make of her beliefs, it is evident that they are inflexible, robust, and sincerely held. She will cleave to them as her most trustworthy touchstone.

Neither confinement, nor fines, nor any other sanction will convince Ms. Manning to participate in the grand jury. At this point, sanctions simply reinforce her perception that she is taking a necessary and righteous stand against abusive institutions. The impact of these sanctions is limited exclusively to exacting a cost from Ms. Manning; they will never have any coercive effect. The sanctions have therefore exceeded their lawful scope, and must be terminated.

Manning says the she would rather act according to her principles than out of self-interest, and again vowed not the testify.

“My refusal to testify continues, predicated on my long standing belief that grand juries, as they function in the contemporary era, are often used by federal prosecutors to harass and disrupt political opponents and activists through secrecy, coercion, and jailing without trial,” Manning also said in a statement obtained by Law&Crime. “My own current confinement reinforces my belief in their tendency to be abused in practice. I cannot agree to participate in such a process. No matter how much you punish me, I will remain confident in my decision. I have been separated from my loved ones, deprived of sunlight, and could not even attend my mother’s funeral. It is easier to endure these hardships now than to cooperate to win back some comfort, and live the rest of my life knowing that I acted out of self-interest and not principle.”

You can read the motion in full below.