Lawyer Suing Kemp’s Office: Saying He Isn’t ‘Umpiring’ His Own Election Is Like Saying Trump Doesn’t Control the Military 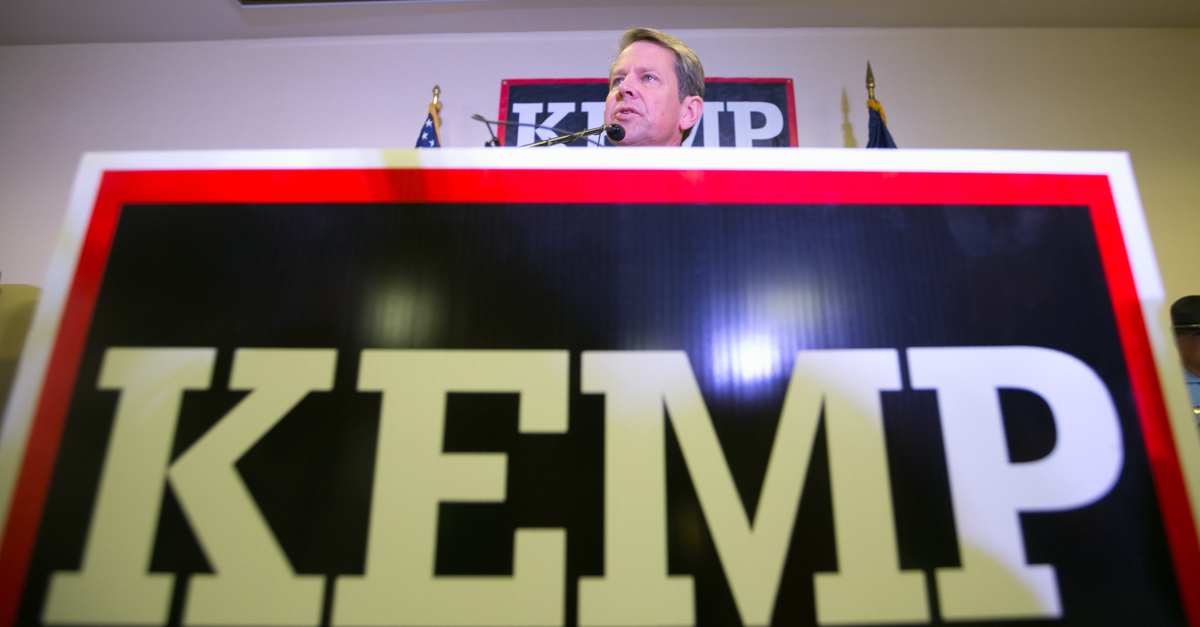 The race for governor in Georgia isn’t over, as Democratic candidate Stacey Abrams has made it clear she has no intention of conceding just yet to Republican Brian Kemp.

The Kemp-Abrams race acquired a wrinkle on Tuesday night with the filing of an emergency restraining order, in an effort to prevent Kemp from certifying results or presiding over “any runoff or recount procedures that would normally be exercised by the Secretary of State’s Office or the Board of Elections, on which he also sits.” This is important because it looks like Abrams is hoping for a runoff. The lawsuit, filed by the Protect Democracy Project, is primarily concerned with the tension between Kemp’s duty to administer a fair election and his desire to win the 2018 gubernatorial election.

The nonprofit said that Wednesday morning Brown et al. v. Kemp has officially been assigned to District Court Judge William M Ray II. In a statement, they reiterated that “Brian Kemp never should have been allowed to preside as the umpire in his own election, especially given the countless ways in which he misused his office to tilt the playing field.”

“It is absolutely critical that he be barred from any further involvement overseeing this too close to call race, which is why we filed our suit. We are seeking action from the court immediately to step in,” the statement said.

As of this writing, Kemp reportedly has 50.4 percent of the vote and is ahead of Abrams by “nearly 68,000 votes with 99% of precincts reporting,” CNN reported.

Law&Crime reached out to the Secretary of State’s Office for comment on the lawsuit. Press secretary and staff attorney Candice Broce responded that Kemp has been notified of a lawsuit, but dismissed it as a political ploy.

“This twelfth-hour stunt will not distract us from fulfilling our responsibilities and working with county officials to ensure a secure, accessible, and fair election for all eligible Georgians,” Broce said. She would add that the Secretary of State’s office does not count votes or re-count votes, but counties do.

At first glance, it seemed the two sides were saying conflicting things: Protect Democracy is saying that Kemp is an “umpire” and the Secretary of State’s Office is saying that he won’t be counting votes. Is there actually a conflict here?

Cross said that while the Secretary of State “may be technically accurate with respect to who literally counts votes,” that doesn’t mean Kemp isn’t umpiring his own election.

“As Secretary of State, Kemp has ultimate responsibility for overseeing the elections across the state including his own race for governor. He sets policy and practices and has authority to make decisions affecting nearly all aspects of the election process and even affecting election results,” Cross said.

Cross also echoed the claim made by Protect Democracy Project that Kemp has acted with “bias.” The plaintiffs claim, for example, that the “political nature” of Kemp’s “baseless accusations” in the press release titled “Democrats Under Investigation for Failed Hacking Attempt, Cyber Crimes” is precisely why the lawsuit has merit.“Upon information and belief, there is not and never was any basis for Defendant Kemp to accuse the Democratic Party of Georgia of seeking to hack into the state’s election systems,” the lawsuit said. “Rather, Defendant Kemp used the resources of his office and the official Secretary of State website to make these accusations to deflect blame for his own failures to address flaws in the election system and to falsely harm his opponents.”

Kemp was thereby accused of using his office of Secretary of State to “advance his campaign” in an extreme way. Cross said that Kemp’s control over the election process was “evident in various policies from his office that the courts recently struck down, such as his purging of voters and leaving many in limbo leading up to the election.”

“Notably, such policies disproportionately affect people of color, which doesn’t look to be coincidental,” he added.

In closing, Cross said that the claim that Kemp “doesn’t control the election process” because counties “execute certain operations of the elections” is like saying “the President doesn’t control the military simply because he’s not among the soldiers who actually execute his commands as Commander in Chief.”

“Kemp effectively is the commander in chief for Georgia elections,” he said.