In yet another plot twist related to the Jussie Smollett case, attorney Michael Avenatti was apparently not far from representing the Nigerian brothers Smollett allegedly paid to stage a hate crime hoax. The revelation was buried in text messages released by Cook County prosecutor Kim Foxx’s office. It was her office that controversially decided to drop 16 felony disorderly conduct charges against the Empire actor for allegedly falsely reporting a hate crime.

Since that decision, Foxx has been in damage control mode. One of the reassuring gestures that was decided on happened late Tuesday, with the State’s Attorney’s Office releasing her text communications.

The text about Avenatti: 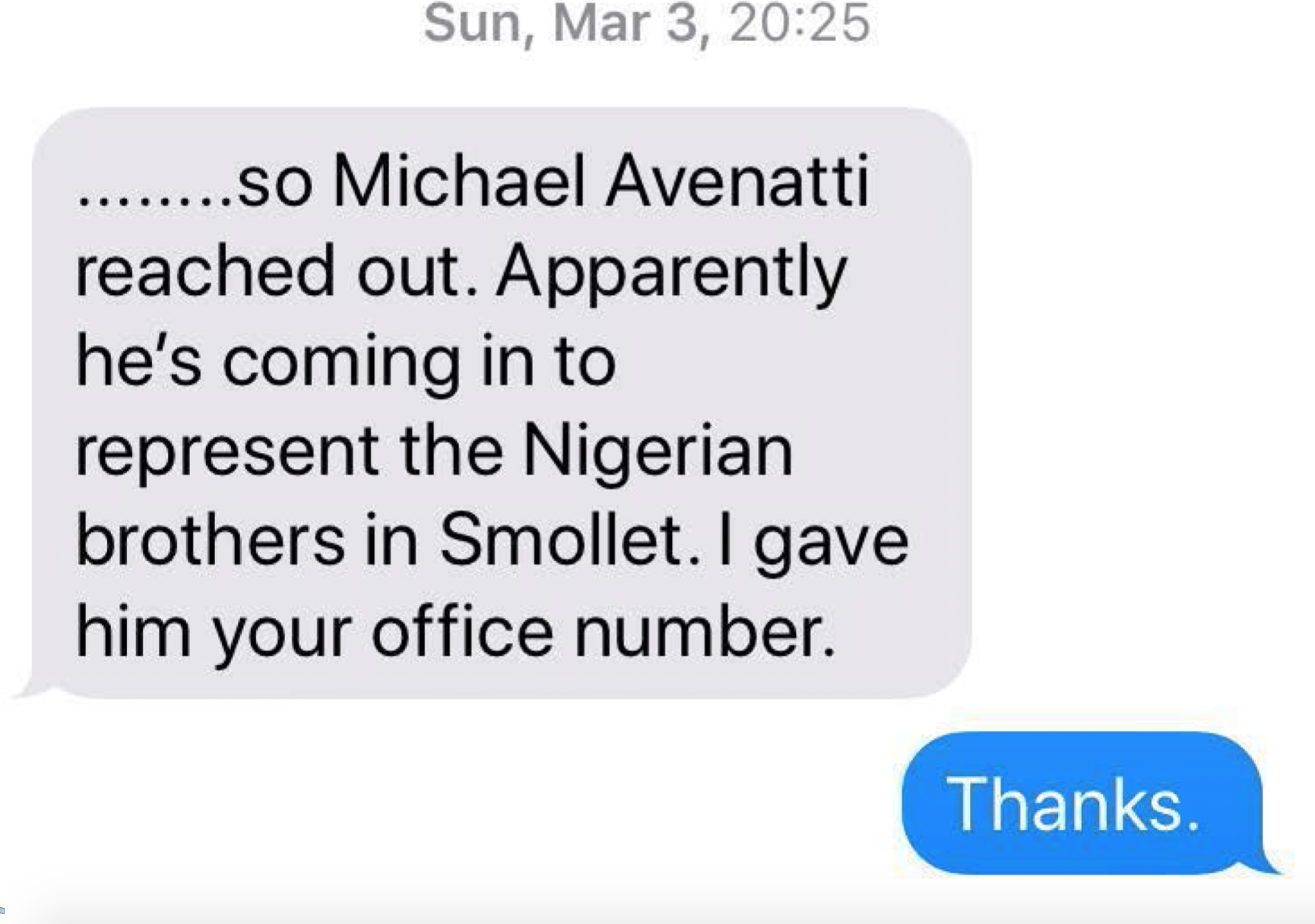 “[S]o Michael Avenatti reached out. Apparently he’s coming to represent the Nigerian brothers in Smollett. I gave him your office number,” read a text that appears to be from Kim Foxx.

The recipient merely replied, “Thanks.”

Avenatti tells Law&Crime that counsel for Abel and Ola Osundairo reached out and asked him to get involved. He said that he decided not to do so.

“I was contacted by the counsel for the brothers and was asked to consider coming into the case to assist them. This is no different than the approximately 50 people everyday who contact me and ask me to take their case. I ultimately decided not to get involved. I never chase clients or cases – they chase me,” Avenatti said.

The interesting thing about this is that Mark Geragos has been representing Jussie Smollett since at least February 20. The text about Avenatti’s possible involvement in the Smollett case is dated March 3.

Roughly three weeks after that, Geragos was identified as a co-conspirator in Avenatti’s alleged extortion plot against Nike. Avenatti has denied those allegations. In the Nike complaint, another California lawyer who represents “celebrity and public figure” clients was been identified as “CC-1” (co-conspirator 1). The Wall Street Journal reported that CC-1 is Geragos. Geragos certainly has represented celebrity clients on the West Coast. Over the years, he’s represented Suge Knight and Chris Brown. More recently, he’s worked with Colin Kaepernick and Smollett.

After Avenatti was arrested on suspicion of domestic abuse, Geragos provided Avenatti with legal advice. Charges against Avenatti were dropped in that case. Most recently, Avenatti was hit was a 36-count indictment, accusing him of a variety of crimes including fraud, false statements, obstruction, and failure to pay taxes. Avenatti has denied these charges.

Law&Crime asked Avenatti if Geragos had anything to do with his decision not to represent the Osundairo brothers.

“Nothing at all,” Avenatti replied.