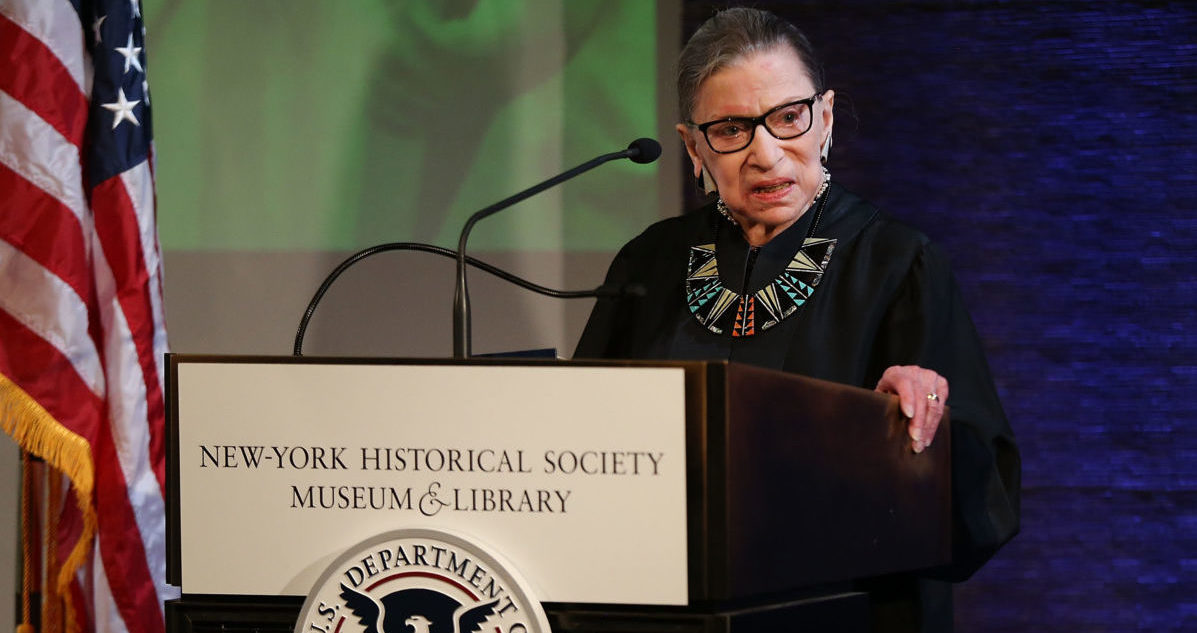 Supreme Court Justice Ruth Bader Ginsburg praised Justice Brett Kavanaugh in her prepared remarks at Friday’s Second Circuit Judicial Conference. She noted that after Kavanaugh was confirmed the number of female Supreme Court clerks reached an all-time high, given his staffing choices. Ginsburg also discussed the cases the court will be deciding this term, speaking candidly on issues like executive deference and partisan gerrymandering.

Below are some of the highlights from Ginsburg’s speech.

Ginsburg began by addressing the significance of Justice Anthony Kennedy’s retirement on the current and future state of the Court.

Although Ginsburg would go on to praise Kavanaugh, she did predict that Anthony Kennedy‘s retirement from the Supreme Court will have far-reaching consequences.

“Shortly after our meeting a year ago, Justice Kennedy announced his retirement. It was, I would say, the event of greatest consequence for the current Term, and perhaps for many Terms ahead.”

Kennedy was, of course, replaced by Kavanaugh.

Ginsburg highlighted Kavanaugh’s contribution to making the Court a more gender-inclusive workplace, but noted that there was still room for improvement.

Justice Kavanaugh made history by bringing on board an all-female law clerk crew. Thanks to his selections, the Court has this Term, for the first time ever, more women than men serving as law clerks. Women did not fare nearly as well as advocate. Only about 21-percent of the attorneys presenting oral argument this Term were female; of the 34 attorneys who appeared more than once, only six were women.

Ginsburg noted that the majority of the Court’s decisions so far have not been made along partisan lines. However, she forecasts plenty of 5-4 decisions in upcoming cases (which involve abortion, gerrymandering, executive deference and LGTBQ discrimination in the workplace).

As of today, we have announced 43 decisions in argued cases. That leaves a large number (27) to be announced in the remaining June days. Of the 43 argued cases resolved so far, on 11, or just over 25-percent, were decided by a vote of 5-4 or 5-3. Given the number of most watched cases still unannounced, I cannot predict that the relatively low sharp divisions ratio will hold.

She called the lawsuit challenging the Trump Administration’s decision to add a citizenship question to the upcoming 2020 census “a case of huge importance,” as it relates to executive deference; she specifically invoked the Court’s 2018 decision on Trump’s travel ban.

On the next to last hearing day of the Term, we heard argument in Department of Commerce v. New York, a case of huge importance. Secretary of Commerce Wilbur L. Ross, Jr., decided to include a citizenship question on the 2020 census questionnaire. He said he was responding to a Department of Justice request for citizenship data to aid in enforcement of the Voting Rights Act.

Census Bureau analyses predicted that adding the question would depress the census response rate for noncitizen and Hispanic households resulting in poorer census data. Evidence from DOJ showed that Ross had sought inclusion of a citizenship question long before the Department’s request.

Several states and non-governmental organizations challenged the decision as arbitrary and capricious and contrary to law in violation of the Administrative Procedure Act. Plaintiff also asserted that addition of the question violated the Constitution’s Enumeration Clause.

Speculators about the outcome note that last year, in Trump v. Hawaii, the Court upheld the so-called “travel ban” in an opinion granting great deference to the Executive. Respondents in the census case have argued that a ruling in Secretary Ross’ favor would stretch deference beyond the breaking point.

She did not mince words in discussing the Court’s upcoming gerrymandering cases in Maryland and North Carolina, calling out the deleterious effects of gerrymandering:

And very high on the most-watched cases list, alleged partisan gerrymandering in North Carolina and Maryland […] Given modern technology, a state legislature can create a congressional delegation dramatically out of proportion to the actual overall vote count.

In North Carolina, for example, in the 2016 election, Republicans won 53 percent of the statewide vote, yet they won 10 of 13 congressional seats. And in 2018, with the same map governing, Democrats won a slight majority in the statewide congressional vote, but again won seats in only three districts […] However one comes out on the legal issues, partisan gerrymandering unsettles the fundamental premise that people elect their representatives, not vice versa.