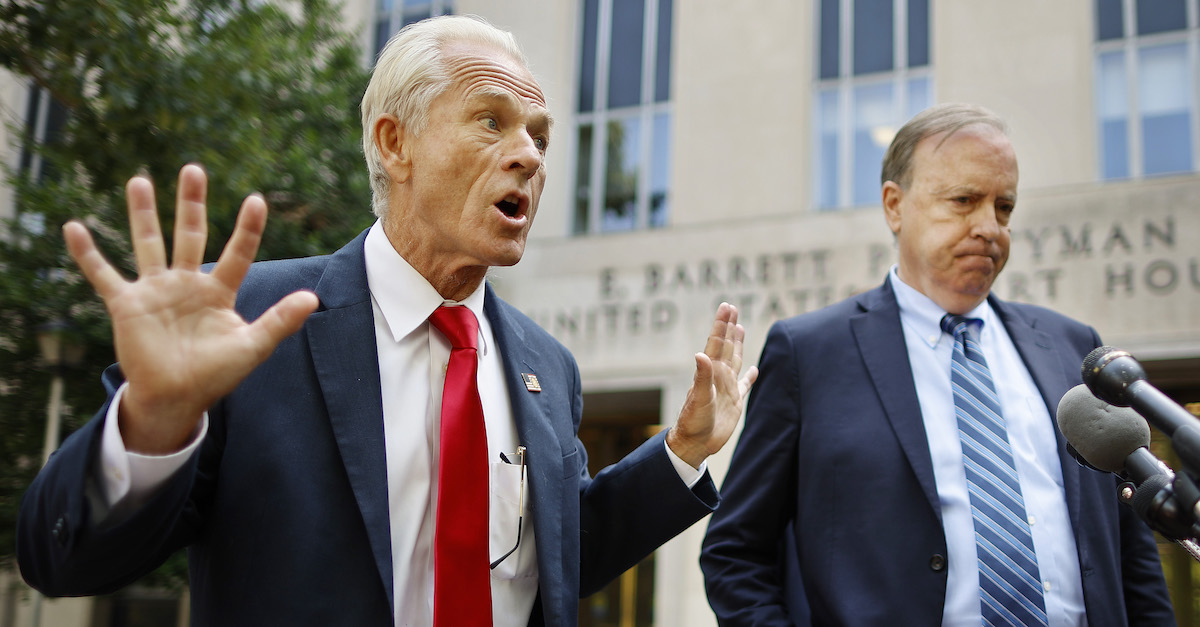 Former Donald Trump trade adviser Peter Navarro — already facing criminal charges for allegedly flouting a subpoena from the House committee investigating the Jan. 6 attack on the U.S. Capitol — has been hit with new accusations about his emails.

On Wednesday, the Justice Department filed a civil lawsuit against Navarro, accusing him of withholding emails that should have gone to the National Archives and Records Administration.

The complaint says that the Archivist of the United States reached out to Navarro and asked him to provide the emails that had not been copied to his government email account. Those emails are allegedly covered by the Presidential Records Act (PRA), which mandates that the Archivist assumes responsibility for the custody, control, and preservation of presidential records, which should ultimately be made available to the public.

Under the PRA, presidential records include: “documentary materials, or any reasonably segregable portion thereof, created or received by the President, the President’s immediate staff, or a unit or individual of the Executive Office of the President whose function is to advise or assist the President, in the course of conducting activities which relate to or have an effect upon the carrying out of the constitutional, statutory, or other official or ceremonial duties of the President.”

The law addresses email specifically, requiring that all presidential records sent using non-official email accounts are to be copied or forwarded to official accounts.

“Mr. Navarro did not respond to NARA’s communications,” the lawsuit alleges.

DOJ lawyers also reached out to Navarro, the complaint says, via email and U.S. mail. Navarro, apparently, wanted something in return.

According to the DOJ, the emails were first discovered through a House subcommittee’s investigation into the government’s response to the coronavirus pandemic.

“The House Select Subcommittee on the Coronavirus Crisis (the Subcommittee) obtained copies of electronic messages from individuals, other than Mr. Navarro, as part of its investigation into the government’s response to the coronavirus pandemic, and those messages reflect that Mr. Navarro used a non-official email account, namely, a ProtonMail account, to send and receive Presidential records,” the complaint says. “Through the Subcommittee’s work, NARA became aware of Mr. Navarro’s use of a non-official email account to send and receive Presidential records.”

Those emails, included as an exhibit to the government’s complaint, show conversations between Navarro and Steven Hatfill, a virologist working with the Trump White House as the coronavirus pandemic emerged.

Navarro is represented by attorneys John Irving and John Rowley, former federal prosecutors who represent Navarro in his criminal case.

“Mr. Navarro is wrongfully retaining Presidential records that are the property of the United States, and which constitute part of the permanent historical record of the prior administration,” the complaint alleges, adding that the “wrongful retention” violates D.C. law, federal common law, and the PRA.

The DOJ has asked for a writ of replevin, which is an order to seize property that has been “illegally taken or wrongfully withheld” and kept in the custody of the U.S. Marshals Service.

Lawyers for Navarro deny any wrongdoing on their client’s behalf.

“Mr. Navarro has never refused to provide records to the government,” Irving told Law&Crime over email. “As detailed in our recent letter to the Archives, Mr. Navarro instructed his lawyers to preserve all such records, and he expects the government to follow standard processes in good faith to allow him to produce records. Instead, the government chose to file its lawsuit today. We anticipate responding in due course.”

Navarro’s criminal case has been set for trial on Nov. 17. In May, Navarro had announced his own civil lawsuit against Democratic House members over the Jan. 6 committee subpoena, but has since dropped that case.

Read the lawsuit, including Navarro’s emails with Hatfill, below.