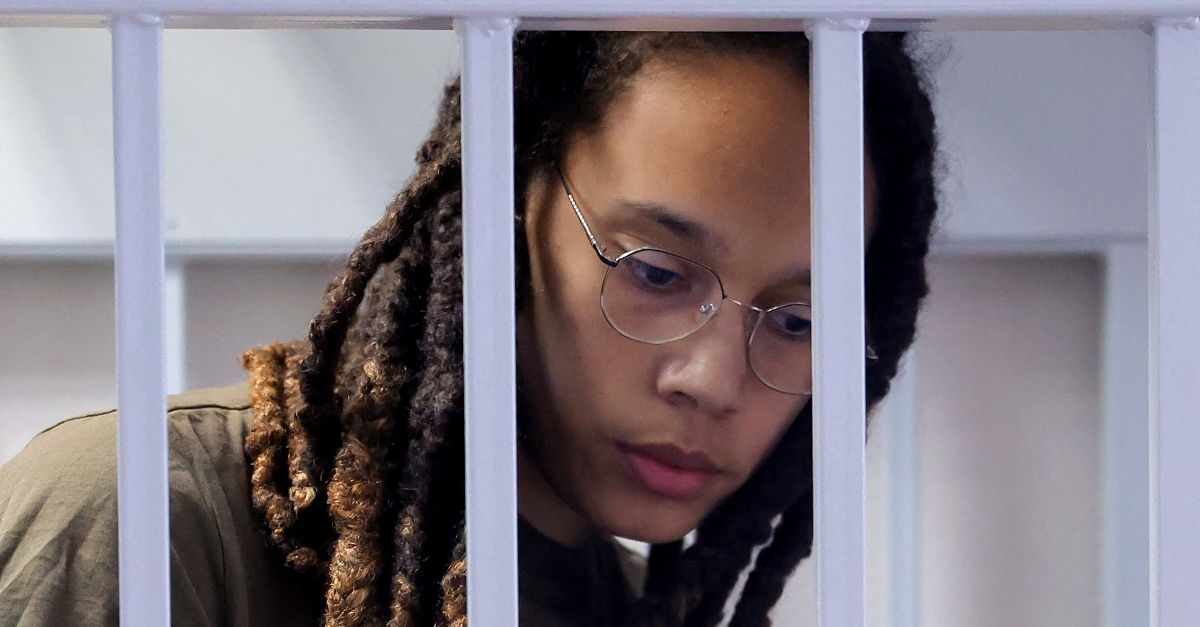 Brittney Griner in a defendant’s cage during her trial.

WNBA star Brittney Griner was sentenced in a Russian court on Thursday to 9 years prison.

Russia gives Brittney Griner NINE years. Griner was arrested with less than 1 gram of cannabis oil in her luggage at Moscow’s airport on February 17th.

She faced up to 10 years behind bars. Prosecutors sought nine and a half years of incarceration.

The foreign nation has been accused of opportunistically prosecuting the athlete, with the U.S. and Moscow’s turbulent relationship on the rocks even more over the Ukraine war. Griner was arrested at the city of Moscow’s Sheremetyevo Airport shortly before Russia started the armed conflict. Customs officials claimed she possessed vape cartridges with trace amounts of hashish oil. Authorities there accused her of smuggling.

Griner on Wednesday told the judge that she did not intend “to break any law,” according to CBS Sports.

“I know everybody keeps talking about ‘political pawn’ and ‘politics,’ but I hope that is far from this courtroom,” Griner said.

“Today, American citizen Brittney Griner received a prison sentence that is one more reminder of what the world already knew: Russia is wrongfully detaining Brittney,” he said. “It’s unacceptable, and I call on Russia to release her immediately so she can be with her wife, loved ones, friends, and teammates.  My administration will continue to work tirelessly and pursue every possible avenue to bring Brittney and Paul Whelan home safely as soon as possible.”

“Today, American citizen Brittney Griner received a prison sentence that is one more reminder of what the world already knew: Russia is wrongfully detaining Brittney.”

The Biden administration has offered to release convicted Russian arms dealer Viktor Bout in exchange for the releases of both Griner and Paul Whelan, a former U.S. Marine convicted in an espionage case. The U.S. State Department spokesman said Whelan was “wrongfully detained,” according to CNN.

Griner’s case became a cause célèbre for Americans, but the prisoner-exchange situation also raised questions about the attention other similar cases are receiving and whether Bout could cause harm after his release. As things stand, Bout is set to get out of U.S. federal prison on Aug. 19, 2029, online records show.

Whelan was already passed up in a previous prisoner exchange, when the U.S. secured the release of former U.S. Marine Trevor Reed.

“Why was I left behind?” Whelan said in a statement obtained by CNN in April. “While I am pleased Trevor is home with his family, I have been held on a fictitious charge of espionage for 40 months. The world knows this charge was fabricated. Why hasn’t more been done to secure my release?”

“We don’t want to continue to put ourselves in situations where Americans are just taken at will so that Russians or other countries that have somewhat of a hostile relationship with the United States are able to negotiate for things that they want,” attorney Adrienne Lawrence, a TV host and the author of the book Staying in the Game: The Playbook for Beating Workplace Sexual Harassment, told Law&Crime’s managing editor Adam Klasfeld in a July report.