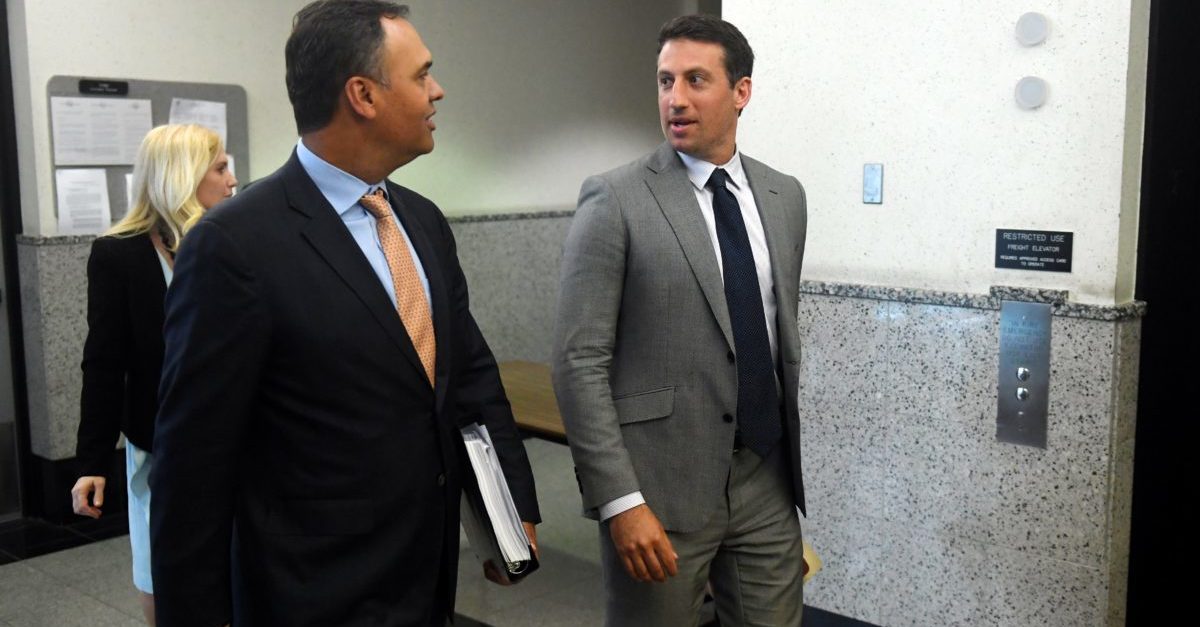 A Florida judge on Friday denied the state’s motion to hold the defense attorneys for New England Patriots owner Robert Kraft in direct or indirect contempt of court, saying that the state should file bar complaints if it is “feeling itself to be aggrieved.”

Judge Leonard Hanser ordered the denial of a motion from State Attorney Dave Aronberg‘s office, which asked that William Burck and Alex Spiro be held in contempt.

“The Court has reviewed the State’s Motion and evidence supporting the State’s allegations. The Court has also reviewed a significant number of cases relative to the issues of criminal contempt, direct and indirect,” Hanser said. “The Court concludes that the issues raised in the State’s Motion and the factual patterns cited by the State to support its Motion, if true, are more appropriately addressed by any party feeling itself to be aggrieved by instituting proceedings in the respective bar associations governing the practice of law which said defense counsel are members.”

A person familiar with the matter told Law&Crime that “state bars don’t do criminal contempt,” but instead investigate lawyers for possible ethical violations. Hanser ruled that the allegations did not rise to the level of criminal contempt and should be handled–if at all–by the bar, the person explained. What’s more, the judge never held a hearing on the allegations.

The defense lawyers, who are representing Kraft in a high-profile misdemeanor prostitution case, were accused by the state of witness intimidation and lying. Kraft has pleaded not guilty. The state claimed that Spiro and Burck lied about evidence to intimidate and tamper with a witness, namely Jupiter Police Officer Scott Kimbark. Kimbark pulled over the vehicle Kraft was a passenger in after Kraft left the Orchids of Asia Day Spa. It was at that spa that Kraft allegedly solicited prostitution. Kimbark said Spiro claimed to have him on video “saying stupid shit” about being willing to make up a story to cover for a lack of probable cause in executing the traffic stop.

“His facial expressions as he smirked and his raised eyebrows along with his accusing statement intimidated me to believe I had done something wrong,” Kimbark said.

For this, prosecutors accused Burck and Spiro of knowingly presenting “false and misleading accusations directly affecting the credibility of a material witness.”

“Four times [emphasis theirs] attorney Spiro accused the witness of having said he was ‘making shit up’ to cover for a lack of probable cause,” the state continued. “The inflammatory words were never spoken by anyone other than by these attorneys for the defendant.”

William Burck told Law&Crime on Friday that State Attorney Dave Aronberg “wasted taxpayer dollars on a frivolous motion and lost again.” Law&Crime has reached out to the State Attorney’s Office for comment.

Kraft and his legal team previously scored a gigantic win when the same Florida judge ruled that the police search of the Orchids of Asia Day Spa (and the video evidence) was illegal. This meant that anything that happened as a result of that search (like a certain traffic stop) was inadmissible evidence in court.