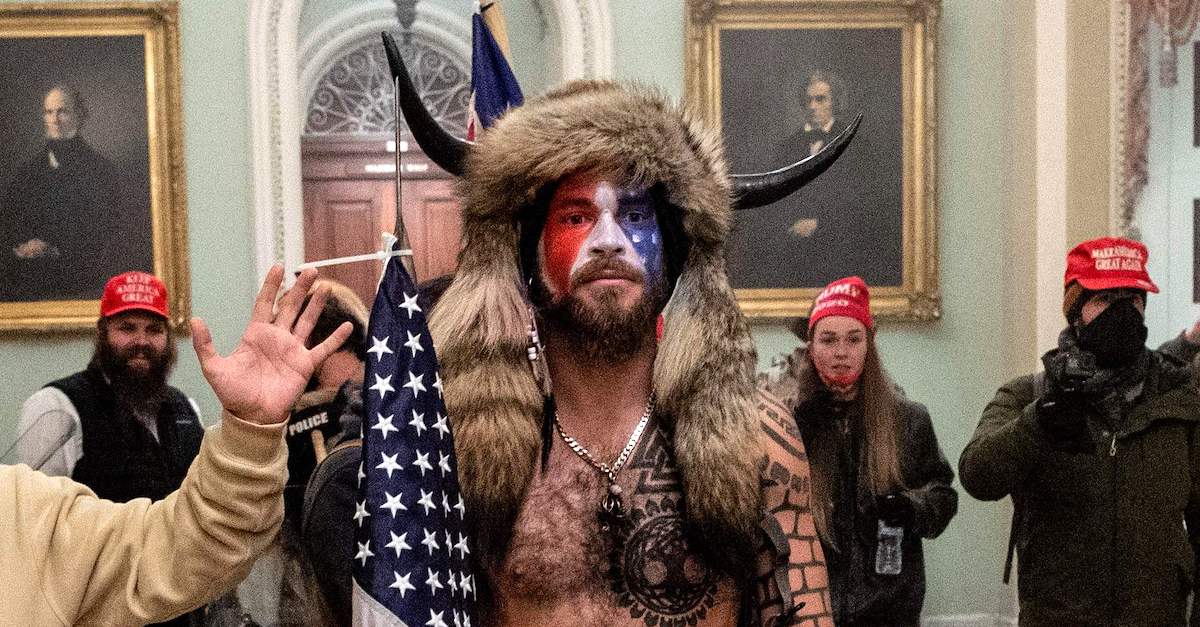 Chansley quickly became one of the most recognizable faces of the Jan. 6 siege on the U.S. Capitol, appearing in hundreds of photos and videos shirtless, donning a horned animal skin hat with red, white, and blue face paint, while also carrying around an American flag on a spear-tipped pole.

Ruling on an oral motion put forth by Watkins, Senior Judge Royce C. Lamberth on Friday found that there was “reasonable cause” to believe that a competency exam of Chansley was warranted under 18 U.S. Code § 4241(a)-(b).

That provision states that a motion for a mental competency hearing will be granted “if there is reasonable cause to believe that the defendant may presently be suffering from a mental disease or defect rendering him mentally incompetent to the extent that he is unable to understand the nature and consequences of the proceedings against him or to assist properly in his defense.”

Watkins said pretrial detention had taken a significant mental toll on the 33-year-old Chansley, who is charged with knowingly entering a restricted building without lawful authority, violent entry, and disorderly conduct on Capitol grounds.

“My goal and objective is to put him in a position where he does not decline, and [for him] to receive to the extent possible the health care that’s needed,” Watkins said, according to a report from the Washington Post. Watkins partially blamed the pandemic safety regulations currently in place for his client’s difficulties, saying that keeping anyone in isolation for up to 22 hours per day is “something even obviously the healthiest of individuals would find challenging.”

Lamberth, a Ronald Reagan appointee, ordered Chansley be placed in the custody of the U.S. Attorney General “for a period not to exceed thirty (30) days for placement in a suitable facility” to undergo the exam, which must be conducted by a licensed or certified psychiatrist or psychologist.

The examiner will then provide the court with a report detailing Chansley’s diagnosis and prognosis, as well as an opinion as to whether he is “presently suffering from a mental disease or defect rendering him mentally incompetent to the extent that he is unable to understand the nature and consequences of the proceedings against him or to assist properly in his defense.”

According to Buzzfeed reporter Zoe Tillman, prosecutors did not oppose the competency evaluation for Chansley at this stage, but said they would likely object “if the defense raises an argument about his competency to stand trial” and would oppose “any renewed effort by Chansley to get out of pretrial detention.”

Watkins made headlines earlier in the week when he referred to Chansley and other Capitol riot defendants as “short-bus people” during an interview with Talking Points Memo.

“A lot of these defendants — and I’m going to use this colloquial term, perhaps disrespectfully — but they’re all fucking short-bus people,” Watkins said. “These are people with brain damage, they’re fucking retarded, they’re on the goddamn spectrum.”

“But they’re our brothers, our sisters, our neighbors, our coworkers — they’re part of our country,” Watkins continued. “These aren’t bad people, they don’t have prior criminal history. Fuck, they were subjected to four-plus years of goddamn propaganda the likes of which the world has not seen since fucking Hitler.”

That was not the first time Watkins invoked the Nazi regime in relation to Trump.

Asked about the resemblance of his client only following Trump’s orders to the Nuremberg defense, Watkins told Law&Crime that he welcomed the analogy—but not in relation to his client, only the former president.

“It’s propaganda of a nature and character that has not been seen in this world since Munich 1933,” Watkins, long known for making outlandish statements that capture national attention, told Law&Crime in February.

The attorney’s media savvy has backfired before, when Lamberth slammed Watkins earlier this year for an interview he arranged for his client with “60 Minutes.”