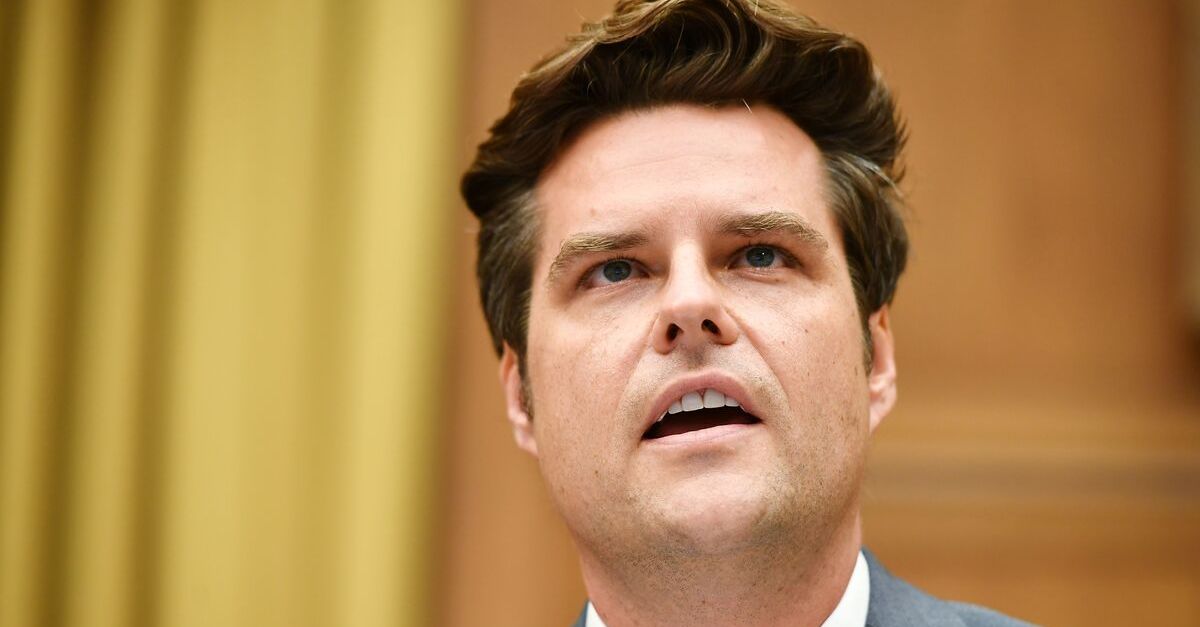 A former associate of Rep. Matt Gaetz on Monday formally pleaded guilty to six of the 33 federal charges he was facing, including sex trafficking of a child, and agreed to provide extensive cooperation with federal investigators’ ongoing probe, a development former prosecutors said does not portend well for the Republican congressman from Florida.

Disgraced former Seminole County tax collector Joel Greenberg, 37, appeared in the U.S. District Court for the Middle District of Florida where he verbally confirmed his guilt in connection with the criminal acts already transcribed in the plea agreement reached last week. 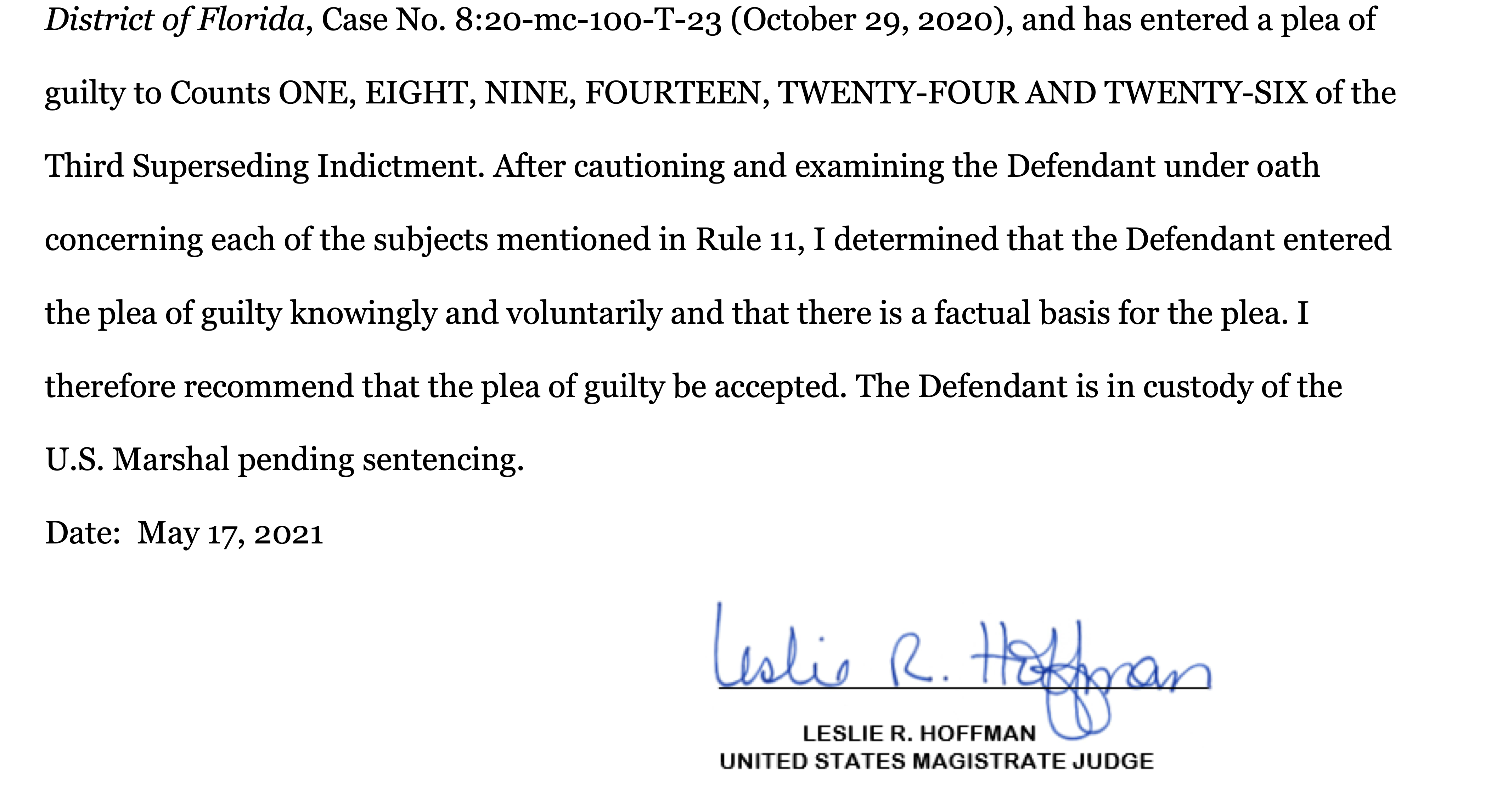 In the 84-page agreement filed with the court Friday, Greenberg admitted that he paid a 17-year-old girl to have sex with him and others, and provided her with narcotics such as ecstasy.

While the other men who allegedly paid for sex with the girl were not named in the document, Greenberg’s deal is contingent upon him cooperating fully with “the investigation and prosecution of other persons” and requires him to testify “fully and truthfully before any federal court proceeding or federal grand jury in connection with the charges in this case and other matters.”

Greenberg also agreed to plead guilty to federal charges of identity theft, stalking, wire fraud, and conspiracy to bribe a public official. He is facing a statutory minimum of 12 years in federal prison and a maximum life sentence — though his cooperation with federal authorities could potentially allow for an even lesser sentence. His sentencing hearing has not yet been scheduled.

Securing Greenberg’s cooperation has been widely viewed as a turning point for investigators in the Justice Department who have reportedly been investigating whether Gaetz also violated federal sex trafficking laws and had sex with the same minor girl. The probe has reportedly focused on whether the minor girl and other women were paid to travel and have sex with Gaetz and his cohorts in the Bahamas and whether the purpose of the trip was to illegally influence the congressman.

Following the proceedings, Greenberg’s attorney, who last month insinuated that an agreement between his client and prosecutors could be very damaging to Gaetz, indicated that Greenberg would provide investigators with any information they sought about the GOP lawmaker.

“He will honor his plea agreement,” lawyer Fritz Scheller said in response to inquiries about whether his client planned to testify against Gaetz.

Several former federal prosecutors weighed in on the significance of Greenberg’s guilty plea and cooperation deal, with all agreeing that it appeared to put Gaetz in a precarious legal position.

Former U.S. Attorney Harry Litman said the agreement could be a “blueprint” for prosecutors with Gaetz in their crosshairs.

“Bare bones plea agreement by Greenberg, but count 1, to which he pleads, is the sex trafficking of minors count. If their regular wingman relationship is as Greenberg claims & many Floridians attest, it’s a flat blueprint for charging Gaetz with same crime, a 10-year mandatory [minimum],” he tweeted.

Bare bones plea agreement by Greenberg, but count 1, to which he pleads, is the sex trafficking of minors count. If their regular wingman relationship is as Greenberg claims & many Floridians attest,it's a flat blueprint for charging Gaetz with same crime,a 10-year mandatory min.

“The document continually reminds us—prosecutors are letting us know—’we have the goods here,” Honig said. “This happens throughout the document—the plea agreement—they talk about financial records, hotel records, credit card records. So what the prosecutors are doing is saying, ‘we have stuff to back up Joel Greenberg.”

Daniel Goldman, another former SDNY prosecutor, agreed with Honig and suggested that such detail may have been included to entice Gaetz into making a deal of his own.

Great Magic Wall explanation by @eliehonig, as always. I agree that this level of detail in a plea agreement is very unusual. One possible reason: to show Gaetz that they do have the goods so he can consider his own options (including early cooperation). https://t.co/9qWzLmABM8

Gaetz, who has not been charged, has denied any wrongdoing. Gaetz has said that he has never paid for sex and he claimed that the last time he had a sexual relationship with a 17-year-old was when he was 17. If the time comes for Gaetz to mount a defense, you can expect the congressman to attack Greenberg’s credibility by pointing to his now-admitted criminal history, numerous run-ins with the law and reported domestic incidents. Gaetz may also repeat claims about an extortion plot and a politically motivated investigation.