It was reported that President Donald Trump is waiting on son-in-law Jared Kushner’s “research” before declaring an emergency that would ramp up the federal response in combatting the novel coronavirus known as COVID-19. Kushner’s research involved, in part, asking the emergency room doctor father of fashion model Karlie Kloss (Kushner’s sister-in-law) for recommendations.

Big hat tip to The Spectator for spectating Kurt Kloss’s Facebook activity and screenshotting it while possible. Kloss took to a Facebook group called EM Docs to crowdsource some recommendations from the 20,000 or so emergency room doctors in the group. 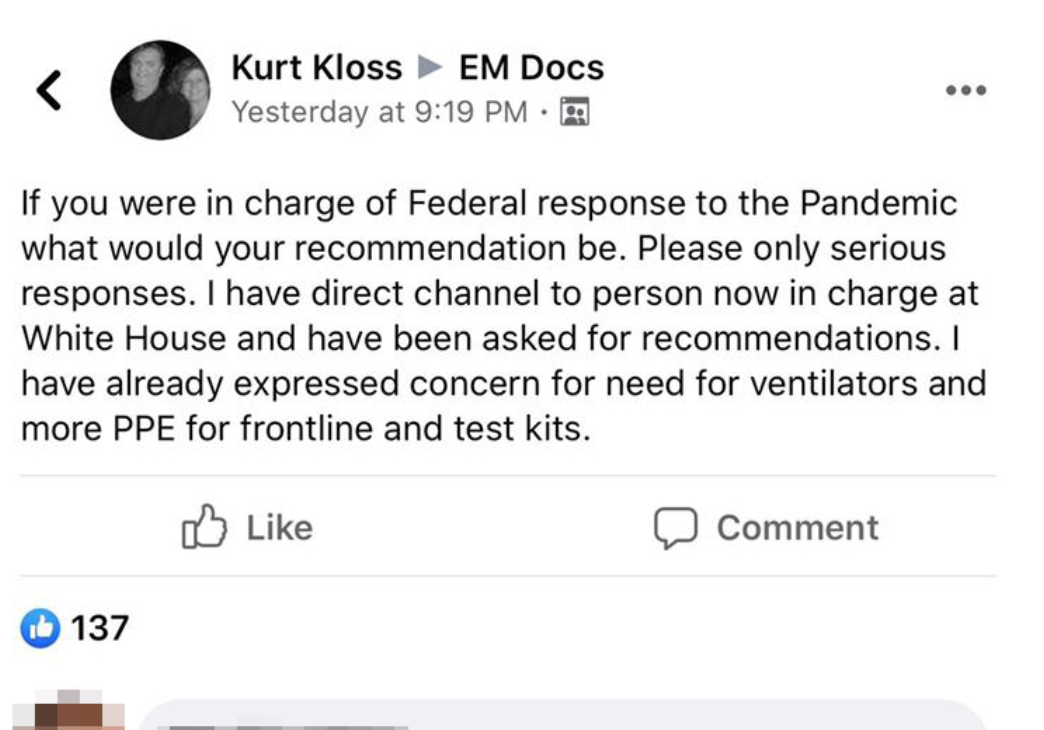 “If you were in charge of Federal response to the Pandemic what would your recommendation be. Please only serious responses,” Kloss said. “I have direct channel to person now in charge at White House and have been asked for recommendations.”

Kloss noted that he himself had already expressed some concerns.

“I have already expressed concern for need for ventilators and more PPE for frontline and test kits,” he said (PPE means personal protective equipment).

In order to reassure the doctors in the group that this was not some trick, Kloss posted the following, per The Spectator:

For transparency I will provide some background about my unique circumstance. I have not shared this in a professional forum before,’ Dr Kloss clarifies. ‘Our daughter Karlie Kloss (one of the top models in the world, 45 Vogue covers and counting; proud dad commentary) is married to Mr Joshua Kushner. His brother is Mr Jared Kushner son in law to the President and who is now directly involved with the response to this. I have been over the past two weeks expressing our concern through Josh about lack of PPE availability, the frustration of not being able to test and especially to ensure enough ventilators. Tonight I was asked by Jared through my son in-law for my recommendations, that’s when I turned to you guys my fellow BAFERD’s [badass fucking emergency room doctors] for help.

One of the doctors in the group EM Docs later posted about all of this on Facebook, revealing that he was among those skeptical that Kurt Kloss, the father-in-law of Joshua Kushner, was the real deal.

“Apparently, Kushner reached out to Dr. Kloss through Karlie and he wisely crowd sourced our group for recommendations,” Dr. Douglas Miesen said. “Apparently, it wasn’t bullshit.”

Miesen then shared a list of recommendations the group came up with:

1) Nationalize as in war time production of PPE’s, testing kits and ventilators
2) Suspend EMTALA (the Emergency Medical Treatment and Labor Act)
3) Activate FEMA and DMAT teams
4)Pop up Field Hospitals with ICU capability Israel seems to have expertise
5)Decentralized testing away from hospital or if on hospital away from ED (emergency department)
6)Drive through testing capability and I would add pulse ox capability
7)Draconian travel restrictions
8)Canceling all mass gatherings
9)Massive marketing of PSA explaining what patients to do especially not going to ED if not in respiratory distress (Need to refine this message )
10)National Telemedicine for screening
11)Locking down Nursing Homes require all care givers in full gear and frequent testing
12)Use state ACEP (American College of Emergency Physicians) for some sort of incident command structure
13)Use emergency funding to compensate quarantined

This was the same list of recommendations that Kloss, in a separate post, said “Jared is reading now.”