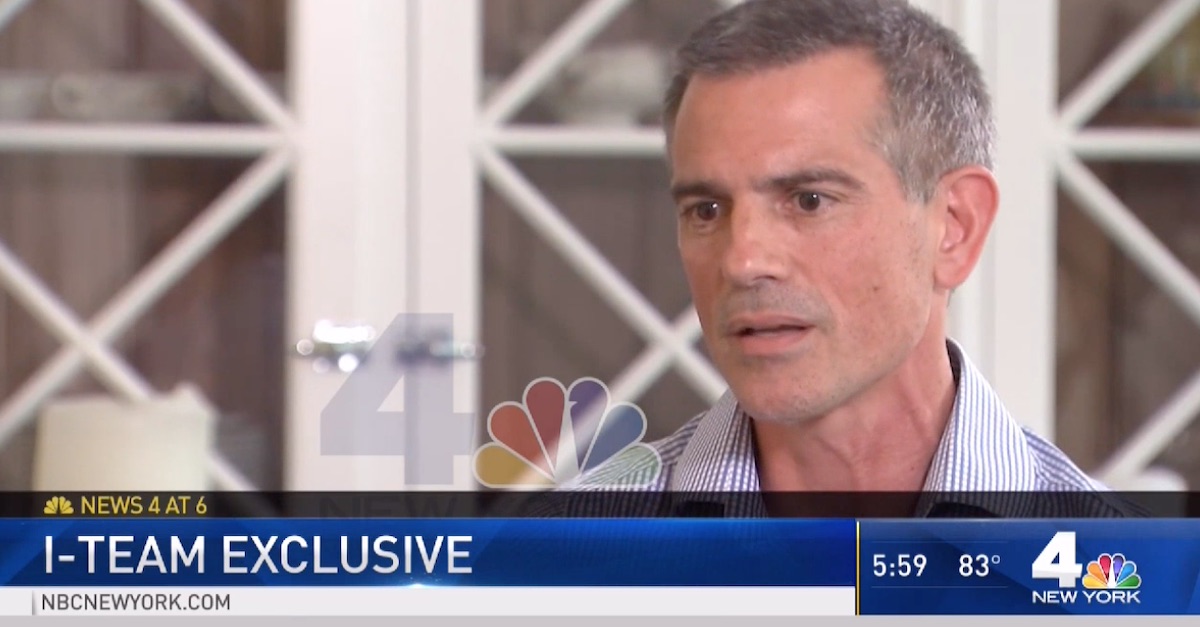 Fotis Dulos, a 51-year-old Connecticut man charged in connection with the disappearance of his 50-year-old estranged wife Jennifer Dulos, claimed during his first sit-down interview about the case that he’s “worried” about her.

NBC New York 4’s Sarah Wallace sat down with Dulos for an interview, an extended version of which is airing at 11 p.m. on Tuesday night. Dulos told Wallace that he understands why the public and police believe he was behind Jennifer’s disappearance, but said the “truth is going to come out.” Fotis Dulos’s defense, you may have seen, recently indicated that is “actively contemplating the revenge suicide hypothesis as an explanation” for Jennifer Dulos’s disappearance. The mother of five was last seen on May 24 after dropping off her kids (ages 8 to 13) at school.

Fotis Dulos said Tuesday that he has “faith in the system.”

“I think they [members of the public] should wait. I have faith in the system, and in the police and the legal system, and hopefully we’ll have some answers soon,” Dulos said. “I never follow the tabloids, and I don’t care about the threats.”

Dulos commented that he believes he’s already been “convicted” in the minds of many. He also said that he thought he was “dreaming” when he ended up jailed and wearing in orange jumpsuit.

Remarkably, Dulos acknowledged that “Statistically when this happens”–a spouse goes missing–“90 or 95% (of the time) it’s the spouse. So I understand why people feel like this.” Dulos said that he’s “in the 5 or 10%” of spouses who aren’t involved.

Finally, Dulos addressed the effect Jennifer’s disappearance has had on his kids and the rest of the family. He included himself among those who are worried about Jennifer.

“It’s been very different … Been a very tough time for the whole family, we’re all worried about Jennifer,” he said. “I’m worried very much about the kids and what they’re going through.”

After Jennifer disappeared in the middle of a contentious divorce, police searched her New Canaan home and found blood stains and spatters in multiple places. According to arrest warrants, there was also evidence that a person or people tried to clean the scene and that cell phone records showed Fotis was in the area the night Jennifer disappeared.

State’s Attorney Richard Colangelo said that Fotis Dulos’s DNA was mixed with Jennifer’s blood, which was allegedly found in the sink at her home.

Authorities allegedly found sponges and clothing stained with Jennifer’s blood in trash cans. Surveillance footage also allegedly showed that a black Ford Raptor pickup truck made 30 stops along a four-mile stretch of road on May 24, the day Dulos disappeared. Fotis Dulos has a black Ford Raptor, and video showed him pulling into his driveway that night at 8:10 p.m., authorities said. Officials also said there was evidence that two altered Connecticut license plates were found in a discarded FedEx package.

Fotis Dulos hired Norm Pattis—the lawyer for Infowars’ Alex Jones–to represent him in this case. Dulos is not the only defendant in this case. Both he and his 44-year-old girlfriend Michelle Troconis were charged for allegedly hindering prosecution and tampering with evidence in connection with Jennifer’s disappearance.

Troconis was allegedly caught on camera “leaning out of the passenger seat of the Ford pickup and either placing something on the ground or picking up an item.”

When Jennifer Dulos filed for divorce two years ago, she claimed Fotis had “sickening revenge fantasies.”

She claimed that her husband had an affair and wanted to move his mistress, Troconis, into the family’s Farmington home. Jennifer also said that she believed that filing for divorce would “enrage” Fotis. She had no doubts that he would “retaliate” in some way.

“I know that filing for divorce, and filing this motion will enrage him,” she said. “I know he will retaliate by trying to harm me in some way. He has the attitude that he must always win at all costs. He is dangerous and ruthless when he believes that he has been wronged. During the course of our marriage, he told me about sickening revenge fantasies and plans to cause physical harm to others who have wronged him.”

“I have rented a home in New Canaan, Connecticut, so that I can safely leave the marital residence with the children and live close to their school,” she added.

It was in that very New Canaan that authorities said Jennifer was the victim of a violent crime.

Fotis Dulos’s attorney Norm Pattis previously downplayed the DNA discovery in the sink, in terms of how it will affect the defense strategy.

Pattis also said, however, that he and his client understand why he is in “such jeopardy.”

“Why do you think he is in such jeopardy? His behavior with the bags, if it can be proven, is deeply troubling and requires an explanation,” Pattis told NBC. “We understand and accept that.”

Both Troconis and Dulos have pleaded not guilty. The pair has been ordered not to contact one another.

Dulos’s sister Rena Dulos defended her brother on Tuesday as a person that she has only known to be “loving and affectionate.”

“Is it relevant for you to know that I have only known my brother to be just that; a loving and affectionate sibling and the greatest of uncles for my two daughters? The life line to a large degree of both our immediate and extended family?” she told NBC in an email. “Is it relevant to point out that Fotis — from a very young age — desired to be a father? To be a caretaker? To have a big family under his paternal ‘wings?'”