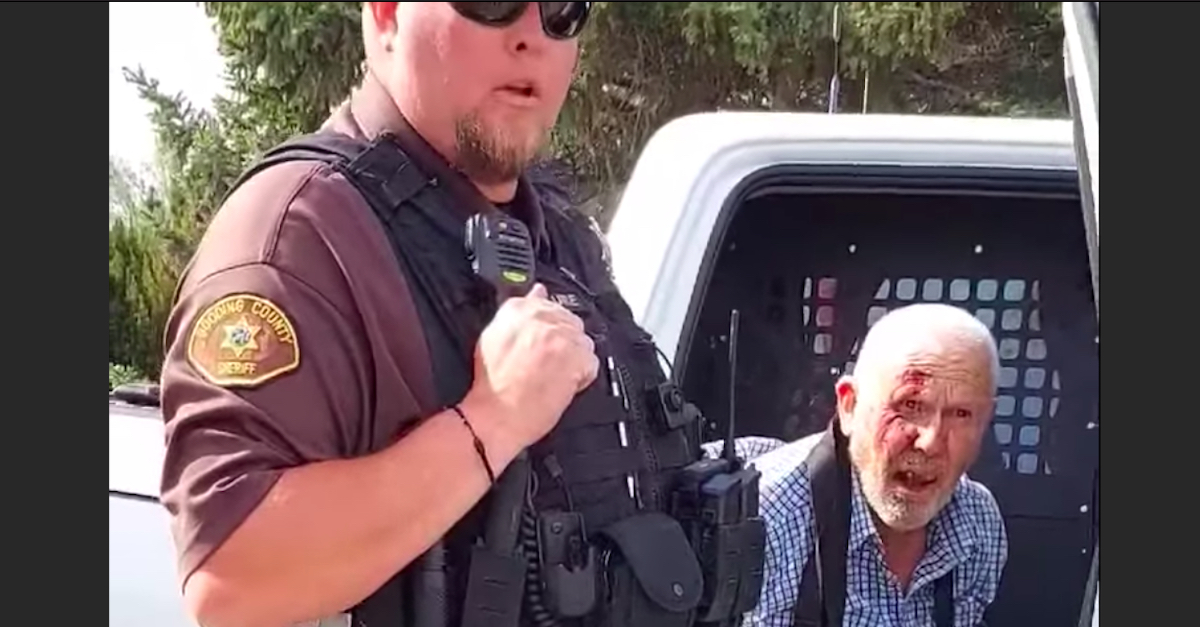 The family of an elderly man in a tiny Idaho city claims that a county sheriff’s deputy threw him to the ground and shocked him with a Taser, leaving him bleeding from the head, local news outlets there have reported.

The gruesome allegations have brought an uncommon degree of national attention to the 2,782-population city of Wendell, as tabulated in the 2010 Census.

According to local accounts, the saga reportedly began after a truck driver called authorities and accused 78-year-old John Hall of road rage and having a gun.

“Deputies responded, Mr. Hall was subsequently tased, and we’re in the middle of investigating all that,” Gough said.

That deputy, who has not been identified by the local news outlets, reportedly has since been suspended, and the incident is under investigation.

Video of the incident was recorded by the Hall’s grandson and posted to Facebook. If the Facebook video doesn’t load for you, watch KTVB’s video:

The footage picks up several minutes into the arrest, showing the septuagenarian Hall already on the ground as the officer cuffs his hands behind his back. The deputy is also carrying an already-deployed Taser that appears to be connected to Hall’s body.

The grandson, Anthony Hall, can be heard yelling at the officers that John Hall is “an old man” who “didn’t do anything.” He also tells the officer that he has a “failing liver” and a “failing kidney.” John Hall’s son, who was in the vehicle with him, is also shown on the ground and in handcuffs.

John Hall’s wife, a woman identified by news outlets as Verla Hall, can also be seen pleading with the deputy to release her husband and demanding to know what had happened. The video ends with John Hall being taken to the deputy’s patrol car with the waistline of his pants nearly at his knees and blood covering his face.

According to a report from The Times-News, the alleged road rage incident took place on Interstate 84. A truck driver told a Southern Idaho Regional Communications (SIRCOMM) dispatcher that another vehicle tried to run him off the road. He then followed the vehicle home and called 911 and said he believed that he saw firearms and two men in the vehicle.

Anthony Hall pushed back on the trucker’s allegations, telling News Radio 1310 that the rig was tailgating his grandfather, who then tapped the brakes in an attempt to get the driver to stop following him so closely.

Court records obtained by News Radio 1310 showed that Verla Hall was charged with resisting an arrest and seizures while no charges were filed against John Hall. The decision as to whether Hall will be charged is going to be made by county prosecutors, according to Sheriff Gough.

Gough said the internal investigation into the incident will be conducted by a member of the Ada County Sheriff’s Office who is a use of force instructor.

In a Facebook post on May 29, Anthony Hall said his grandfather’s health had “taken a turn” since he was tased and the family had called an ambulance.

“He is having violent muscle spasms from his spine to his legs,” Anthony Hall wrote. “His cries and moans fill me with absolute rage towards what that officer did. The ambulance was called. Please keep John in your prayers.”