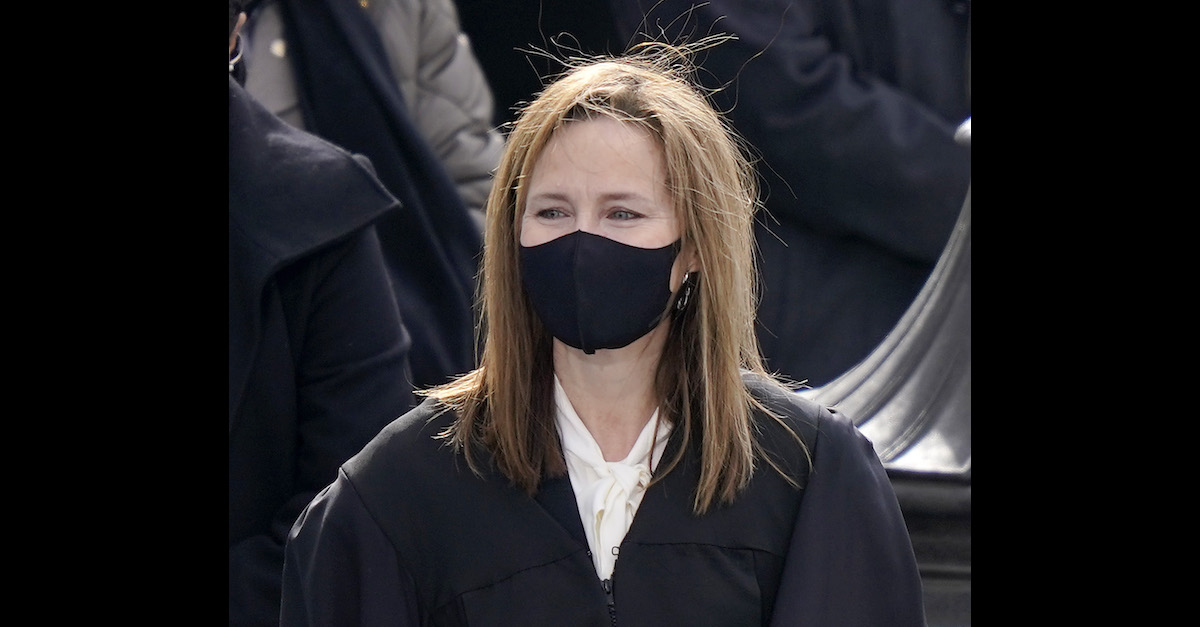 A small group of Indiana University students who previously failed to overturn their school’s COVID-19 vaccine mandate are now trying again by asking for relief directly from the U.S. Supreme Court.

Led by lead plaintiff Ryan Klaassen, the students have advanced the not-quite-novel and three-time-losing legal theory that the Fourteenth Amendment to the U.S. Constitution somehow forbids a state entity from imposing a vaccine mandate.

On July 18, the U.S. District Court for the Northern District of Indiana denied the students’ bid for a preliminary injunction against the flagship state school’s vaccine policy. Three days later, the same district court trounced the students’ motion for an injunction pending appeal.

Earlier this month, a trio of Republican-appointed judges on the U.S. Court of Appeals for the Seventh Circuit refused to stop the university’s policy from taking effect by noting that vaccine mandates have a long constitutional pedigree and are, despite the ongoing right-wing culture war messaging against COVID-related government action, both commonplace and commonsensical public health measures.

Since 1905, the nation’s highest court has upheld all manner of mandatory vaccination regimes promulgated by state actors. The legal history of such measures began with the landmark case of Jacobson v. Massachusetts, which in 1905 upheld a mandatory smallpox vaccination law that punished the non-observant with fines and potential imprisonment. The petitioner way back then, much like the student petitioners now, objected to the law under the 14th Amendment. It was all for naught; a 7-2 majority of the court ruled in favor of the state in the name of public health.

“Given Jacobson v. Massachusetts, which holds that a state may require all members of the public to be vaccinated against smallpox, there can’t be a constitutional problem with vaccination against [COVID],” well-known (in legal circles) conservative Circuit Judge Frank Easterbrook noted. “To the contrary, vaccination requirements, like other public health measures, have been common in this nation.”

The students, undeterred, would now like to try their hand with the high court’s notoriously obscure shadow docket.

“The circumstances here are clear — Students are required to comply with IU’s Mandate in order to receive a government benefit (matriculating at IU),” the application addressed to Justice Amy Coney Barrett argues. “The substantive due process rights to bodily integrity, autonomy, and medical choice are equally clear.”

In their 39-page emergency writ for an injunction requesting relief, the students point out that the three U.S. COVID vaccines are only being administered under an “Emergency Use Authorization” which requires that the FDA issue a series of boilerplate warnings about the nature of the shots themselves.

These so-called “informed consent” guidelines are only binding on the FDA itself, but, the students argue, the “principle” at stake should vindicate their desire to refuse the shots.

“Accordingly, the same processes should be used, and consents obtained, when suggesting that students take a vaccine that has only been approved for emergency use,” the filing argues. “Students believe the required consent is undermined by IU’s Mandate and rendered a nullity for them. IU’s Mandate is contrary to these principles, processes, and consents.”

The petition also takes aim at the relevant case law — and essentially asks the court to revisit (and overturn) longstanding precedent:

This case presents this Court with the opportunity to address important constitutional issues and to provide needed guidance to the lower courts regarding the flood of COVID vaccine mandate-related cases already pending and expected, regarding the historically unique, but now ubiquitous, situation where state officials, as here, claim the authority to compel vaccination based upon precedent that is over a century old, despite this Court’s developed jurisprudence regarding substantive due process rights since 1905. This Court has developed doctrines to protect the infringement of fundamental rights of bodily integrity, autonomy, and medical choice, and the scrutiny level that should be applied to these constitutional questions, depending on the context involved. Now this Court has the opportunity to decide in this case whether Students are protected by these doctrines.

In other words, to hear the students tell it, lower courts are reading Jacobson and applying it without using novel substantive due process frameworks that don’t really exist. This filing asks the court to make new law based on a recent concurrence by Justice Neil Gorsuch.

“The relevant constitutional jurisprudence here demands heightened scrutiny,” the students argue–bidding for an exacting method of constitutional interrogation that essentially results in foregone negative conclusions about the validity of government action when the method is used by the courts.

“Such scrutiny should apply to the review of IU’s Mandate because, under modern constitutional jurisprudence, an infringement on now-recognized fundamental rights of bodily integrity, autonomy, and of medical treatment choice exists here by IU’s conditional denial of benefits, seeking to coerce IU students into forfeiting their fundamental rights on the threat of virtual expulsion,” the filing continues. “Under the heightened scrutiny now required, IU’s Mandate comprises an unconstitutional condition on Students.”