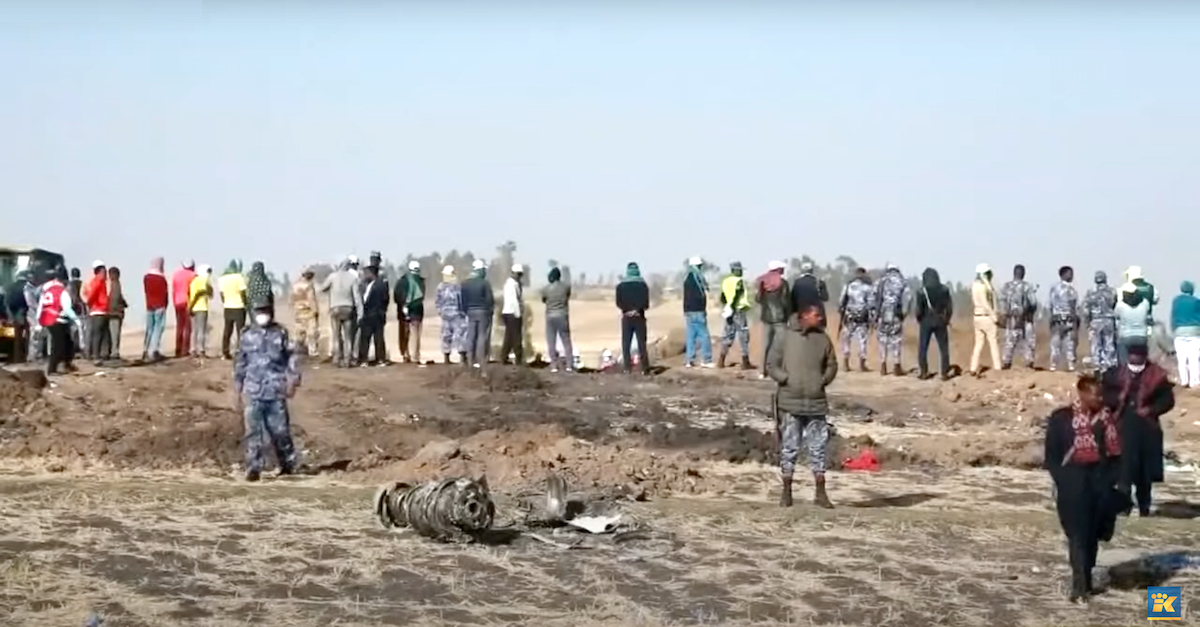 The scene of the Boeing 737 MAX crash near the town of Ejere, Ethiopia, appears in a screengrab from Seattle, Wash. NBC affiliate KING-TV.

A federal grand jury has indicted a former Boeing chief technical pilot for allegedly deceiving the Federal Aviation Administration during a U.S. government evaluation of the flight controls on the Boeing 737 MAX — the model of aircraft that twice crashed overseas and killed hundreds.

According to a grand jury indictment in the Northern District of Texas, former Boeing Chief Technical Pilot Mark A. Forkner, 49, formerly of Washington State and currently of Keller, Texas, is accused of deceiving the FAA’s Aircraft Evaluation Group during its certification procedures for the Boeing 737 MAX and the plane’s MCAS system. Forkner gave FAA inspectors “materially false, inaccurate, and incomplete information about a new part of the flight controls” according to a DOJ press release. Forkner’s alleged deception prevented the FAA from accurately determining how different the MCAS was when compared to previous aircraft control systems. Accordingly, the FAA thereafter failed to appropriately determine the “minimum level of pilot training” the new system truly required, the DOJ alleged.

Because of his alleged deception, a key document published by the FAA AEG lacked any reference to MCAS. In turn, airplane manuals and pilot-training materials for U.S.-based airlines lacked any reference to MCAS — and Boeing’s U.S.-based airline customers were deprived of important information when making and finalizing their decisions to pay Boeing tens of millions of dollars for 737 MAX airplanes.

According to court records, Forkner is charged with two counts of fraud involving aircraft parts in interstate commerce and four counts of wire fraud. He could face decades in prison if convicted on all charges.

An interim report from Ethiopian investigators found that “bad data from a single nose sensor on the nose” of the plane that crashed in their country forced the aircraft to the ground at “more than 33,000 feet per minute.” The impact took just seconds at that speed, Seattle NBC affiliate KING said in March 2020. The BBC noted that the plane was “brand new.”

The entire fleet of Boeing 737 MAX aircraft was grounded after the disasters. Most or all of the fleet has since “safely return[ed] to service,” Boeing has said online.

“Forkner allegedly abused his position of trust by intentionally withholding critical information about MCAS during the FAA evaluation and certification of the 737 MAX and from Boeing’s U.S.‑based airline customers,” Assistant Attorney General Kenneth A. Polite Jr. said in a written statement. “In doing so, he deprived airlines and pilots from knowing crucial information about an important part of the airplane’s flight controls. Regulators like the FAA serve a vital function to ensure the safety of the flying public. To anyone contemplating criminally impeding a regulator’s function, this indictment makes clear that the Justice Department will pursue the facts and hold you accountable.”

“In an attempt to save Boeing money, Forkner allegedly withheld critical information from regulators,” Acting U.S. Attorney Chad E. Meacham for the Northern District of Texas continued. “His callous choice to mislead the FAA hampered the agency’s ability to protect the flying public and left pilots in the lurch, lacking information about certain 737 MAX flight controls. The Department of Justice will not tolerate fraud – especially in industries where the stakes are so high.”

“Forkner allegedly withheld crucial information about the Boeing 737 Max and deceived the FAA, showing blatant disregard for his responsibilities and the safety of airline customers and crews,” Shivers said. “The FBI will continue to hold individuals like Forker accountable for their fraudulent acts which undermine public safety.”

Plaintiff’s attorneys who are representing the victims of the two jet crashes overseas applauded the indictment but implored the federal government to do more.

“The tragic loss of 157 lives could have been prevented had Mark Forkner spoken up but he certainly didn’t act alone,” said Robert A. Clifford, the Chicago-based lead counsel on the Ethiopia air disaster.

Clifford then heaved criticism up the corporate ladder at Boeing.

“This inexcusable type of corporate greed goes far beyond the chief pilot at the company that haphazardly made these aircraft in an effort to increase profits,” Clifford said in a statement to Law&Crime. “As Lead Counsel in the litigation against Boeing and speaking on behalf of so many families who will never be the same, I implore the DOJ to go further in its criminal investigation and indictments to determine just how far the deception went and who was at the bottom of it all.  I think they will find many corporate officials took part in withholding critical information from the certifying agency. A deep-dive criminal investigation is owed to these families who gave the ultimate sacrifice and to the flying public that continues to buy tickets on the MAX aircraft.”

The mother and father of crash victim Samya Rose Stumo similarly lashed out at Boeing in a subsequent statement provided by Clifford’s firm.

“Forkner is just a fall guy. He and Boeing are responsible for the deaths of everyone who died in the Max crashes,” said Samya’s mother Nadia Milleron. “The system within Boeing rewarded short term financial gain over safety, and Mark Forkner was operating within that system. Prosecutors can and should find quite a few other people who were also responsible for causing the crashes. Every single family who lost someone in the Max crash feels the same way: the executives and board of directors of Boeing need to go to jail.”

Michael Stumo, Samya’s father, railed against a DOJ deal to defer prosecution against Boeing itself.

“The Deferred Prosecution Agreement was really a DOJ Boeing ‘Don’t Prosecute Agreement.’ Nobody really believes that Forkner was the only bad actor in this complex pressure for profits, and the scheme to defraud the FAA,” Stumo said in part.

The deferred prosecution agreement was announced in early January. Per the DOJ at the time:

The criminal information charges the company with one count of conspiracy to defraud the United States. Under the terms of the DPA, Boeing will pay a total criminal monetary amount of over $2.5 billion, composed of a criminal monetary penalty of $243.6 million, compensation payments to Boeing’s 737 MAX airline customers of $1.77 billion, and the establishment of a $500 million crash-victim beneficiaries fund to compensate the heirs, relatives, and legal beneficiaries of the 346 passengers who died in the Boeing 737 MAX crashes of Lion Air Flight 610 and Ethiopian Airlines Flight 302.

Boeing said in Oct. 2019 that it was reviewing instant messages sent by Forkner that touched off controversy. Those messages suggested that the MCAS system was “running rampant” in a simulation.

“Granted, I suck at flying, but even this was egregious,” Forkner said in those messages (according to a report in the Seattle Times).

A statement by the company two days after that report read in part:

We understand entirely the scrutiny this matter is receiving, and are committed to working with investigative authorities and the U.S. Congress as they continue their investigations.

We are deeply saddened and have been humbled by these accidents, and are fully committed to learning from them.  We have developed improvements to the 737 MAX that will ensure that accidents like these can never happen again, and are committed to continuing to work closely with the FAA and global regulators to ensure the MAX’s safe return to service.

Read the indictment against Forkner below: