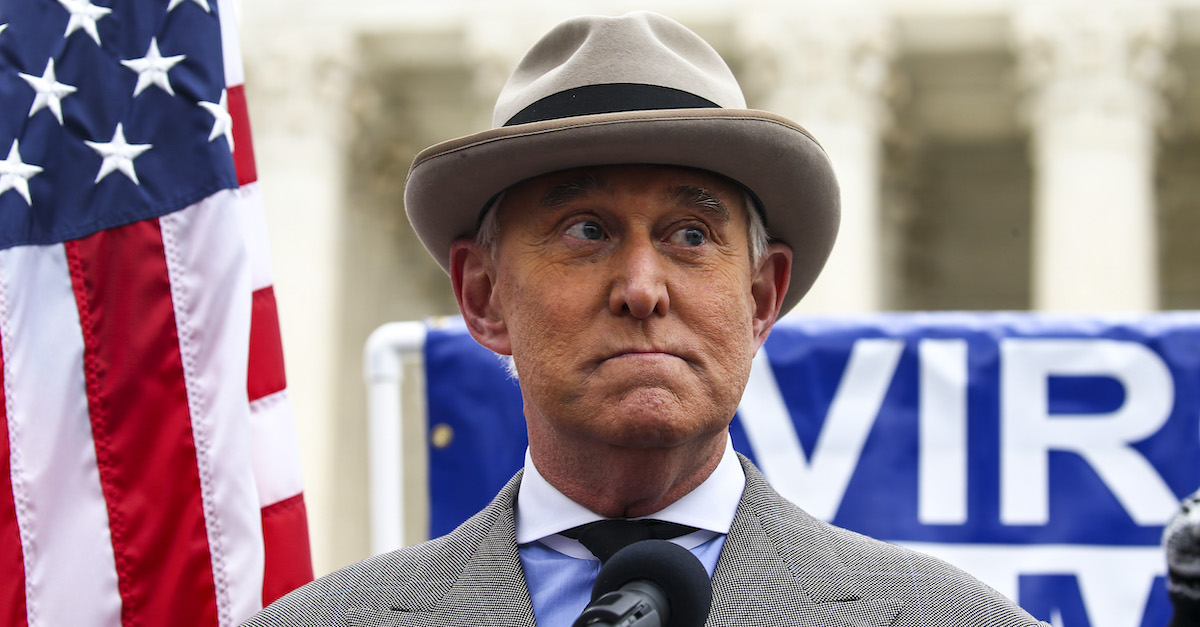 The U.S. Department of Justice on Friday sued longtime political operative Roger Stone, his wife Nydia Stone, and several ventures connected to the couple for alleged unpaid taxes between the years 2007 and 2011, plus the year 2018 for Roger Stone individually.

The 18-page civil lawsuit was filed in U.S. District Court for the Southern District of Florida, Fort Lauderdale Division.

Stone appeared to refer to the lawsuit on Parler as “[y]et another steaming pile of horseshit from corrupt prosecutors apoplectic about my pardon.”  He added a hashtag: “#rogerstonestilldidnothingwrong.”

“Same Deep State Bullshit — different day” he said on Telegram while posting a series of news articles about the case. The hashtag was slightly different on that platform: “#RogerStoneDidNothingWrong.”

He also said as follows on Telegram:

After Robert Mueller’s dirty cops destroyed me financially the Department of Injustice, well aware of the fact that I have no income and no assets files a bogus civil suit against me. I guess they’re still really pissed off about the pardon. Now I have no choice but to defeat them again. #RogerStoneStillDidNothingWrong

The DOJ and the IRS see things differently.

“For each of the years 2007 through 2011, Roger and Nydia Stone filed joint federal income tax returns but did not pay in full the amount of the income taxes they reported as due,” the lawsuit alleges. What follows is a chart listing payments the Stones allegedly failed to make. “Despite notice and demand for payment, Roger and Nydia Stone have failed and refused to pay the entire amount of the liabilities described . . . [t]aking into account all payments, credits, and abatements, as of April 2, 2021, Roger and Nydia Stone jointly and severally owe $1,590,361.89 in unpaid income taxes, penalties, and interest for tax years 2007 through 2011, plus further interest and statutory additions that continue to accrue.”

The lawsuit further alleges that Roger Stone individually filed a separate return from his wife in 2018 and owes the government $407,036.84 after not paying “in full the taxes he reported.”

The other named defendants are Drake Ventures LLC (an “an alter ego of the Stones”), the Bertran Family Revocable Trust (“which holds title to the condominium where the Stones reside”), and an assortment of other parties (Broward County, Fla.; Russell Harris; Galleria Lofts Condominium Association, Inc.; and Galleria Lofts LLC) which “may have an interest in the Stone Residence.” If the tax lawsuit does not work, the DOJ, in the alternative, “seeks an order setting aside the transfer of the Stone Residence to the Bertran Trust as fraudulent.”

“The Stones dominated and controlled Drake Ventures to such an extent that it does not exist as an independent entity,” the lawsuit claims. The Bertran Trust fits in, according to the lawsuit, because it was allegedly set up to shield the Stones around the time Roger Stone was indicted as part of Robert Mueller‘s probe into the 2016 election. Court documents say the Stones “entered into an installment agreement with the IRS that required them to pay $19,485 each month toward their unpaid taxes.” However, “[a]fter Roger Stone’s indictment,” he and his wife purchased their home “in the name of the Bertran Trust” — allegedly without using Bertran Trust assets to pay for the property. The money for the down payment came from the Drake Ventures account, the DOJ says. Drake Ventures “continued making payments to the IRS” on Stone’s behalf for a while, the lawsuit says, but those payments stopped the day after a “Certificate of Trust for the Bertran Trust was recorded at the Broward County Courthouse” in March 2019. The lawsuit dives into the specifics of how, when, and to whom the money moved in detail.

The bottom line, the suit alleges, is that “[t]he Stones intended to defraud the United States by maintaining their assets in Drake Ventures’ accounts, which they completely controlled, and using these assets to purchase the Stone Residence in the name of the Bertran Trust.” The “numerous” alleged “badges of fraud” include the following, according to the lawsuit:

The Stones faced the threat of litigation. Roger Stone had just been indicted;

The Stones anticipated that the United States would resort to enforced collection of their unpaid tax liabilities once they defaulted on their monthly installment payments to the IRS;

The Stones transferred assets to the Bertran Trust by using their assets (which were held in a Drake Ventures account) to purchase the Stone Residence while titling the Stone Residence in the name of Nydia Stone as trustee for the Bertran Trust, in anticipation of the IRS taking steps to collect their unpaid taxes. They purchased the residence shortly after Roger Stone’s indictment and placed it in the name of the Bertran Trust just prior to defaulting on their installment agreement with the IRS. The Stones have long owed back taxes, and they have been parties to numerous installment agreements, some of which were terminated by the IRS. They were aware that their default would result in IRS collection activity.

Six counts are alleged in total: (1) unpaid federal income taxes spanning the years 2007 through 2011 by both Roger and Nydia Stone; (2) unpaid federal income taxes in 2018 for Roger Stone individually; (3) alter ego liability for Drake Ventures; (4) fraudulent transfer to the Bertran Trust; (5) nominee liability for the Bertran Trust; and (6) the case seeks a declaratory judgment as to federal tax liens against all defendants.

“This action is authorized and requested by the Chief Counsel of the Internal Revenue Service, a delegate of the Secretary of the Treasury of the United States, and is commenced at the direction of the Attorney General of the United States in accordance with 26 U.S.C. §§ 7401 and 7403,” the lawsuit notes. U.S. DOJ Attorney Christopher J. Coulson signed the papers on behalf of Acting Assistant U.S. Attorney General David A. Hubbert, whom President Biden appointed February 8, 2021.

Roger Stone did not immediately reply to a Law&Crime email seeking comment.