‘He Stole from Me and Lied to Me’: Stormy Daniels Torches Her Old Attorney Michael Avenatti in Fraud Trial 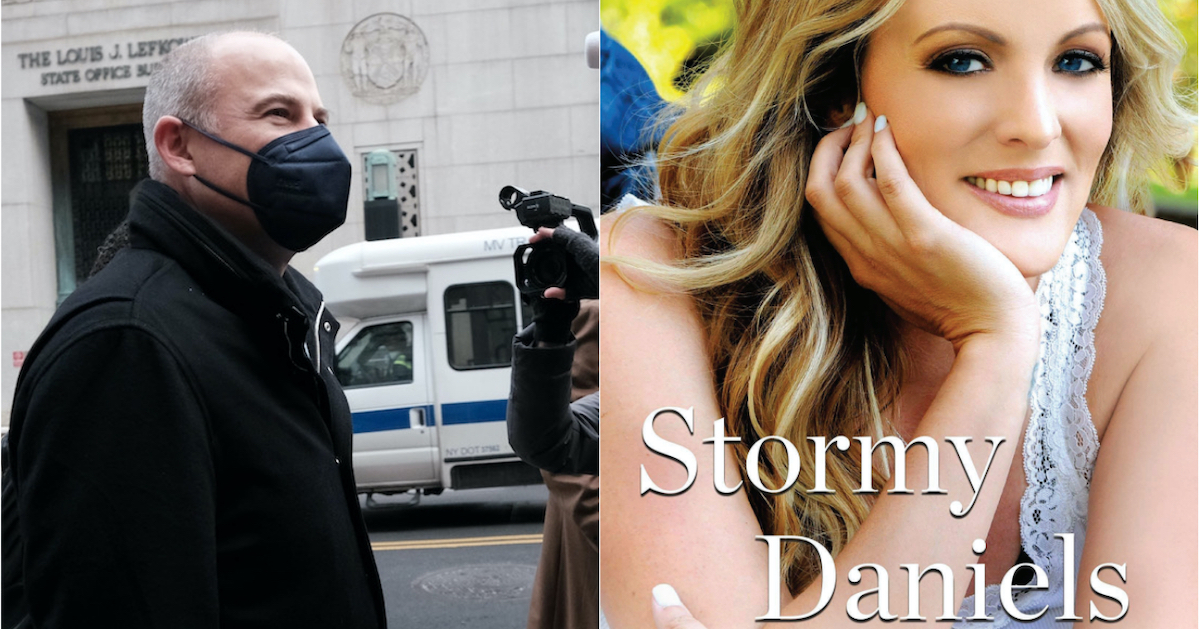 Michael Avenatti arrives at a federal court in Manhattan for a criminal case in which he is accused of stealing money from his former client, adult-film star Stormy Daniels on Jan. 24, 2022 in New York City. The cover of Daniels’s book, entered as an exhibit at the trial, is on the right.

Tearing into her old lawyer during her first day on the witness stand, Stormy Daniels testified that Michael Avenatti “stole from me and lied to me,” giving a daylong account about the disastrous fall of a once-renowned attorney-client relationship.

When she was represented by Avenatti, Daniels’s litigation against former President Donald Trump made both lawyer and client household names. Before that relationship went south, Daniels said, Avenatti understood she was struggling financially.

“I explained to him that I didn’t have a large deposit or retainer to spend and I was concerned about finding someone I could afford,” Daniels, introduced to the jury under her birth name Stephanie Clifford, said.

Avenatti, who jettisoned his defense attorneys earlier this week, is now representing himself. He told a skeptical federal judge that he wants to subject his former client to a six-hour cross examination.

After nearly daylong questioning by the government, Avenatti only got to fit in 10 minutes of cross-examination by the day’s end. That time showed Avenatti and Daniels’s matchup will be a testy one.

Stretching from the mid-morning until the close of the trial day, Daniels’s testimony how one of the most notorious attorney-client relationships of the early years of the Trump administration devolved into bitter recriminations, accusations and criminal prosecution years later.

In the lead up to the prosecution of Trump’s ex-fixer Michael Cohen, Avenatti represented Daniels in a discovery battle over what she described as Trump’s hush money payments to silence their affair.

Though Trump never has faced charges in connection with those payments, prosecutors said the former president—thinly veiled in court papers as “Individual 1″—instructed Cohen to pay her and ex-Playboy model Karen McDougal for their silence before the 2016 presidential election. Cohen later pleaded guilty to campaign finance violations in connection with the scheme.

That litigation made Avenatti a fixture across cable news and led to interest in a book deal for Daniels, who later published her memoir under the title “Full Disclosure.” Daniels testified that it was a decade-old dream of hers that made her giddy about its fruition.

“I can’t feel my face,” Daniels wrote in a text message after receiving a payment, telling the jury that was because she was smiling so much.

According to Daniels, the heady euphoria gave way to an unpleasant surprise. She claimed that Avenatti stole almost $300,000 of her $800,000 advance of that book, keeping her in the dark about those payments.

That was far more than the agreement she said she thought she had entered.

“He said it’ll be $100,” Daniels said, of their agreement and his plans for a crowd-funded legal defense fund.

A copy of attorney-client fee contract, entered into evidence and dated Feb. 27, 2018, showed they indeed agreed upon a “one-time payment of $100.00” and Avenatti’s “standard hourly fees and out-of-pocket costs” from any legal defense fund established to recuperate that money.

Systematically leading Daniels through a series of text messages seeking to collect payment, Assistant U.S. Attorney Robert Sobelman had the led her through her reactions to the allegedly missing payments. Daniels said that she believed Avenatti’s alleged misrepresentations that the check hadn’t been sent when she wrote that September: “I did not get paid today. I am not fucking happy. They are in breach of contract by about 4 weeks.”

Though Daniels said that she understood Avenatti would not accept any compensation in connection with her book, a flow chart submitted into evidence by prosecutors shows each check flowing in a timely fashion from publisher St. Martin’s Press to her agent, Janklow & Nesbit Associates. At least a portion of each of the payments going to Avenatti, and the full third check went to his accounts, prosecutors say.

Prosecutors entered this chart into evidence showing when Stormy Daniels’s book payments were sent—and where they actually went. (Image via DOJ)

Text messages show Daniels pressing the matter of where the third check went for months to come, well into the next year, without progress.

“Yes. They are on it, will call you when I land,” Avenatti replied that day.

That November, Daniels recounted finding out on social media that a second defense fund had been created, and she publicly posted that she did not know about it. Avenatti texted her about what was widely perceived as public criticism by her client and asked her to get on the phone to plan a “soft landing.”

On Dec. 2, 2018, Avenatti prompted Daniels to tweet: “Now that Michael and I have sorted everything out and we know the accounting is on the up and up, we are going to kick ass together on two coasts tomorrow. #TeamStormy.”

She replied: “Tweeted. Had to add a curse word so no one would be suspicious.”

Daniels added with a laugh that her fans knew she has a “potty mouth.”

WEST HOLLYWOOD, CA – MAY 23: Stormy Daniels and attorney Michael Avenatti are seen at The Abbey on May 23, 2018 in West Hollywood, California. (Photo by Tara Ziemba/Getty Images)

Underneath the social media patch-up, the same concerns continued to boil.

In February 2019, Daniels testified, Avenatti asked her if she would accept a lower payment from the publisher. She says she replied: “Hell, no.”

Daniels says she eventually received proof of the banking transfers from the literary agent and sent the screenshots to Avenatti.

She described it as a “mic drop” moment.

She says she wanted that to send the message: “I’m tired of your lies. Just stop. Come clean.”

During opening statements, prosecutors said that Avenatti was “desperate for money” when he allegedly swindled Daniels out of her advance.

“The Top Lawyer on TV and Everything”

Before Daniels took the stand, Avenatti’s former lawyer Sean Macias corroborated that portrait of financial desperation. Macias described himself as “shocked” when Avenatti showed up at his office saying that he was “jammed up” and needed $250,000 in the form of a bridge loan.

“He was the top lawyer on TV and everything,” Macias said.

Recalling him as looking “just agitated,” Macias told a jury that Avenatti said he needed the money “now.”

“I just looked at him and said, ‘Seriously? Are you—Seriously?’” Macias recounted, seemingly gobsmacked in the retelling.

Macias said he did not loan Avenatti the money, but Avenatti’s former co-counsel Mark Geragos did. Geragos figured prominently in a different criminal prosecution against Avenatti for conspiring to extort Nike by threatening to expose a corruption scandal unless they paid him more than $20 million. Geragos, who participated in the negotiations with Nike, was named as an “unindicted co-conspirator” in that case.

Avenatti was ultimately sentenced to two-and-a-half years in prison for that conviction, but he has served much of that sentence via home confinement in the wake of the COVID-19 pandemic.

Other than the two New York prosecutions, he was charged with a variety of alleged frauds in California. His first thwarted prosecution there ended in a mistrial after a federal judge found that prosecutors failed to turn over potentially exculpatory evidence.

Avenatti continues to maintain his innocence over the pending charges against him, from coast to coast. In the Daniels case, Avenatti claims that the alleged fraud is little more than a “fee dispute” that the government should never have treated criminally.

Minutes before the trial day’s close, Avenatti’s cross-examination began and touched upon a subject the defense had long previewed: an attempt to discredit Daniels for her belief in the paranormal, the subject matter of her upcoming TV show “Spooky Babes.”

Asked by Avenatti about whether she’s claimed to have the ability to see and speak to dead people, Daniels affirmed: “Yes, I’ve said that.” But she denied saying she had X-ray vision.

When Avenatti asked whether Daniels claimed to be able to speak to a doll, Daniels snapped: “Susan speaks to everyone. She’s a character on ‘Spooky Babes.'”

Avenatti pressed the question about whether she speaks to the doll.

Calling to strike every word after “yes” as non-responsive, Avenatti eked out a minor victory. Judge Furman granted the motion, and the doll’s social media presence was stricken from the record.

(Photo of Avenatti by Spencer Platt/Getty Images; Daniels photo is a trial exhibit)