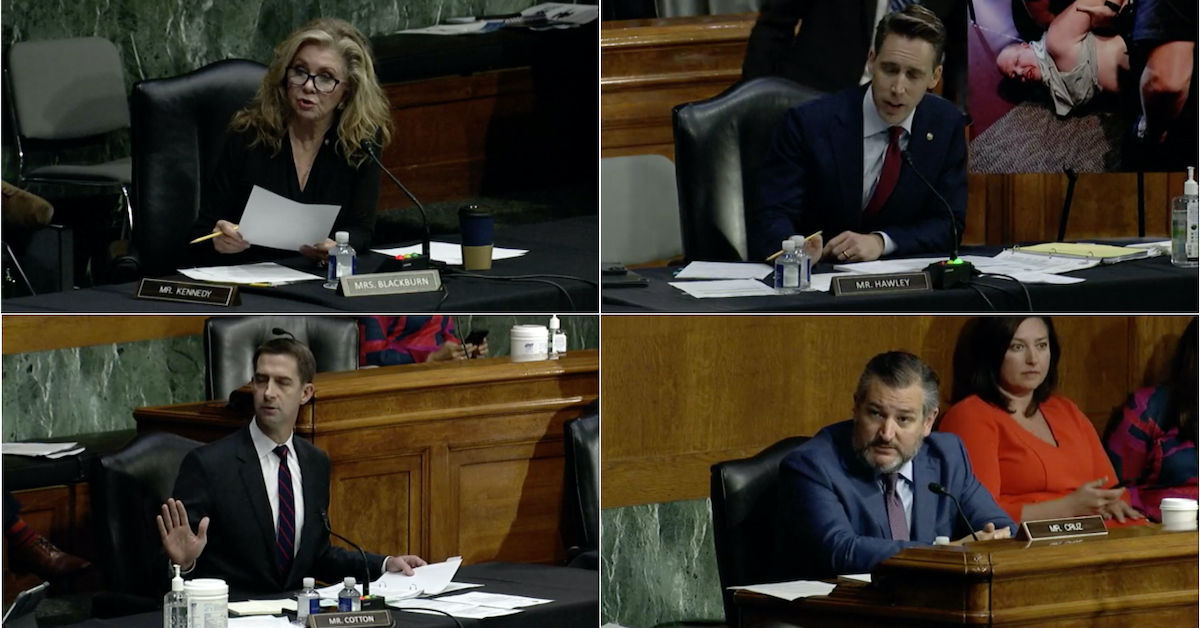 As described by Republicans on the Senate Judiciary Committee on Wednesday, a chill wind has been blowing from the Department of Justice to school boards across the country. GOP senators took turns claiming that parents have been likened to terrorists for dissenting against school boards—or reporting their daughter’s rape.

The source of the parents’ fear, the Republican lawmakers alleged, is a single-page memo by Attorney General Merrick Garland’s Department of Justice.

“In recent months, there has been a disturbing spike in harassment, intimidation, and threats of violence against school administrators, board members, teachers, and staff who participate in the vital work of running our nation’s public schools,” the document, which bears Garland’s signature, begins.

In the words of Sen. Ted Cruz (R-Texas), the memo instructed the FBI to treat mothers and fathers who disagree with educational bureaucrats as possible domestic terrorists. (It does not.) His fellow hard-right colleague Marsha Blackburn asserted that the Justice Department has likened those parents to Oklahoma City bomb conspirators Timothy McVeigh and Terry Nichols, whom Garland prosecuted early in his career. (Neither name is mentioned in the memo.)

The memorandum was so egregious, argued Senators Tom Cotton of Arkansas and Josh Hawley of Missouri, that Garland should no longer hold his job.

“Thank God you’re not on the Supreme Court,” Cotton declared to Garland, who was famously nominated to the Supreme Court by Barack Obama but blocked by then-Senate Majority Leader Mitch McConnell (R-Ky.). “You should resign in disgrace, judge.”

Even the top Republican on the Judiciary Committee, Chuck Grassley of Iowa, amplified the insinuation that parents have been muzzled by Main Justice.

“Local school officials and parents may not speak up in these meetings out of fear that the federal government will do something to them,” Grassley said. “So, that’s a poisonous, chilling effect.”

Totaling less than 300 words, Garland’s memo does not have any variations of the words “parents,” “mothers” or “fathers.” Garland noted repeatedly throughout the onslaught of questioning that the memo expressly welcomes “spirited debate,” which is protected under the First Amendment.

“While spirited debate about policy matters is protected under our Constitution, that protection does not extend to threats of violence or efforts to intimidate individuals based on their views,” the memo states. “Threats against public servants are not only illegal, they run counter to our nation’s core values. Those who dedicate their time and energy to ensuring that our children receive a proper education in a safe environment deserve to be able to do their work without fear for their safety.”

A complicated sequence of events explains the transformation a short statement of federal support for the safety of public servants in schools boards into an object of partisan outrage.

In September, the National School Boards Association (NSBA) sent a letter to President Joe Biden requesting federal help dealing with the “growing number of threats of violence and acts of intimidation occurring across the nation.” The letter cited news reports across the country about protests over COVID-19 policies, as well as alleged threats of violence at school boards that resulted in arrests. The NSBA eventually walked back the letter, ultimately expressing “regret” for sending it, but first, their message would make waves in Washington.

On Oct. 4, Garland’s memo called for federal coordination with local authorities to assess the threat and how to address it.

“Coordination and partnership with local law enforcement is critical to implementing these measures for the benefit of our nation’s nearly 14,000 public school districts,” his memo said. “To this end, I am directing the Federal Bureau of Investigation, working with each United States Attorney, to convene meetings with federal, state, local, Tribal, and territorial leaders in each federal judicial district within 30 days of the issuance of this memorandum. These meetings will facilitate the discussion of strategies for addressing threats against school administrators, board members, teachers, and staff, and will open dedicated lines of communication for threat reporting, assessment, and response.”

As a closely watched and close election winds down in Virginia, Republican candidate Glenn Youngkin pointed to reports of sexual assaults in the commonwealth’s Loudoun County high schools. A teen who identified as “gender fluid” allegedly sexually assaulted a girl in a bathroom, following a relationship that began as consensual, the Washington Post reported. Both the alleged perpetrator and victim were 15 years old.

Though gender identity reportedly did not come up during a court hearing, the topic has dominated the press coverage because Loudoun County policy allows transgender students to use bathrooms that match their identities. Youngkin accused the school system of a cover-up, a proposition that Democratic gubernatorial candidate Terry McAuliffe called “Trumpian conspiracy theories.” McAuliffe was Virginia’s governor from 2014 to 2018. Former President Barack Obama said at a McAuliffe rally on Saturday that “We don’t have time to be wasting on these phony, trumped-up culture wars.”

With a crucial election for their party looming—believed to be an early harbinger for the 2022 midterm elections—Republican senators repeatedly invoked the Loudoun County rape case as the type of parental concern that the DOJ purportedly wants to censor. Garland, audibly frustrated, repeatedly told GOP lawmakers that nothing in the memo that would discourage a parent from complaining that a daughter had been raped.

Read the memo in its entirety, below:

(Screenshots from the Senate Judiciary Committee)