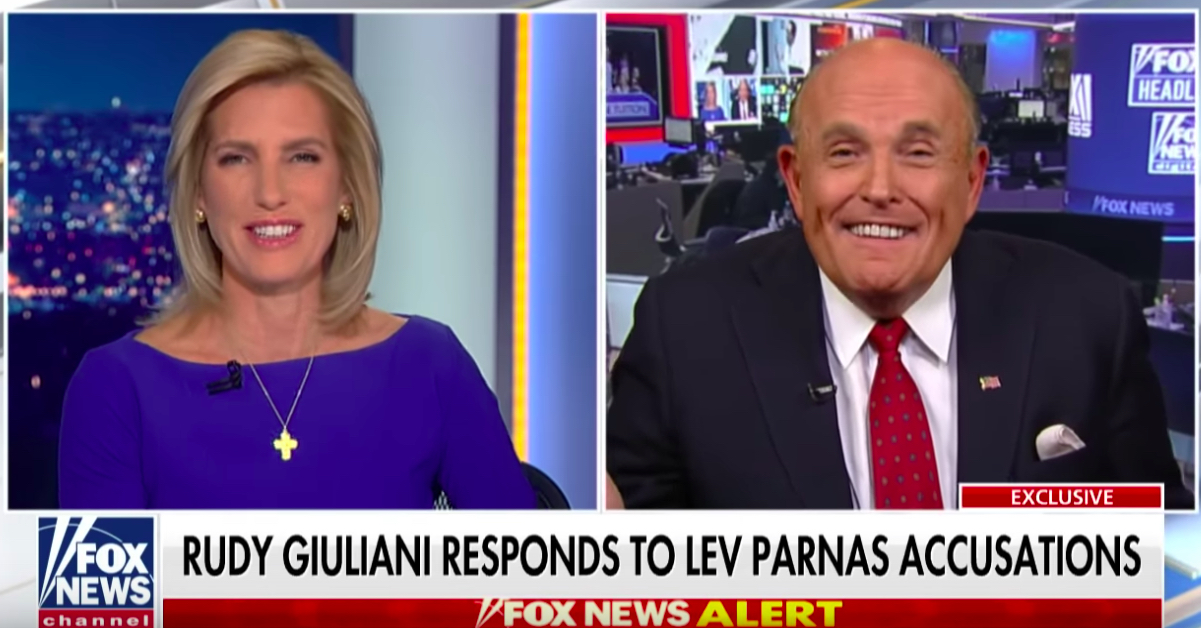 Rudy Giuliani on Monday suggested that former U.S. Ambassador to Ukraine Marie Yovanovitch unlawfully spied on him and several other prominent Republicans, expressing outrage that she is not under investigation. Giuliani provided no evidence to support his claim, the latest in a growing list of baseless accusations to originate from the president’s personal attorney.

Giuliani appeared on Fox News’s The Ingraham Angle to combat allegations and evidence provided by his former business partner Lev Parnas which further implicated Giuliani in the coordinated campaign to oust Yovanovitch from her post, which may have included unlawful surveillance of the former diplomat.

Rudy: I didn't surveil Yovanovitch. In fact, she surveilled me, John Solomon and Hannity. pic.twitter.com/MBegO9cVVZ

Instead of questioning the basis for Giuliani’s claim, or asking him to provide any proof for his assertion, Ingraham raised her hand and said she too was “on the list” of surveilled persons.

“Oh are you on the list – nobody’s investigating that,” an incensed Giuliani responded.

While there is absolutely no documentation or testimony to corroborate the allegations against Yovanovitch, documentation recently provided by Parnas to congressional investigators raised concerns that he and his associate Igor Fruman worked with Republican congressional candidate Robert Hyde to keep tabs on Yovanovitch’s movements in Ukraine.

Parnas also told MSNBC’s Rachel Maddow that he consistently kept Giuliani updated on his work in Ukraine, saying he “wouldn’t do anything without the consent of Rudy Giuliani.”