Noam Chomsky Torches Democrats’ Narrow Trump Impeachment: ‘A Tragedy’ That ‘May Send Him Back to Office’ 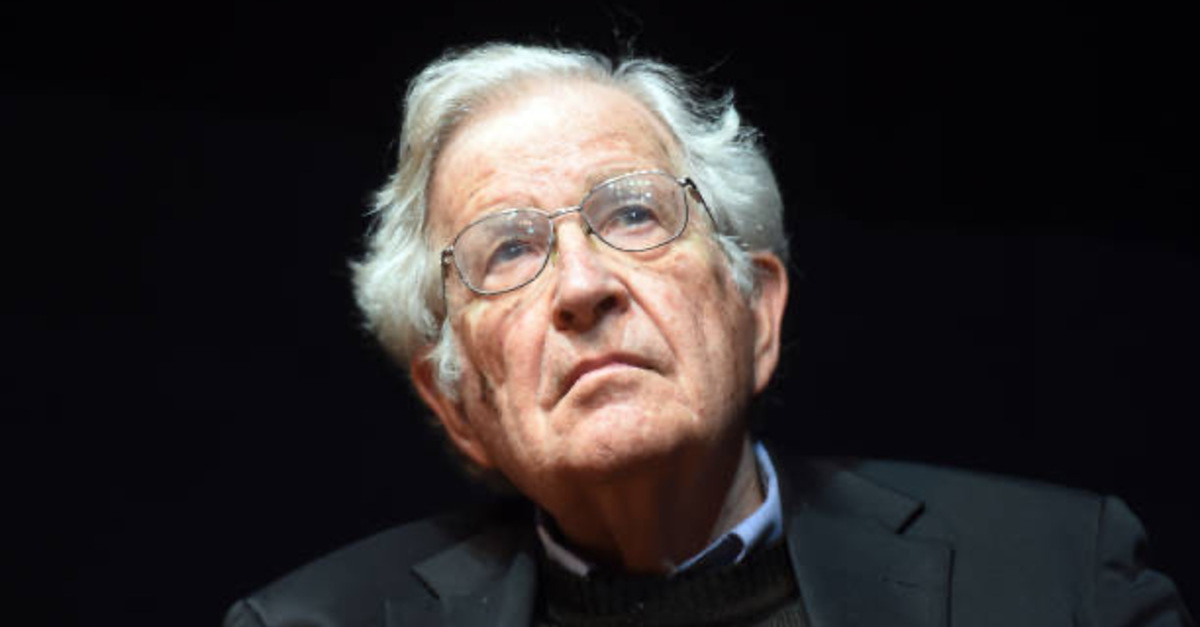 Noam Chomsky, the father of modern linguistics as well as the world’s most-respected—and most-cited—living public intellectual, harshly criticized the Democratic Party’s impeachment inquiry as an insufficient indictment that could inadvertently help President Donald Trump cruise to re-election later this year.

As Democrats insist against evidence that their concerns have leverage or relevance and lodge continued protests against Sen. Mitch McConnell’s (R-Ky.) iron grip on the GOP Senate Caucus—and as pundits wonder credulously about the technicalities and nomenclature in the decidedly non-legal but trial-like Senate process—Chomsky ridiculed both the overarching process and recent developments.

The libertarian-socialist scholar then predicted that this impeachment will boost Trump to re-election:

I think the impeachment process, which avoids Trump’s major crimes and keeps to the fact that he tried to harm a prominent Democrat (like Watergate), will end up being a gift to Trump and may send him back to office. A tragedy.

“The worst crimes by far are those that literally threaten human survival, not in the distant future: his policies on escalating global warming and the race to develop still more destructive weapons,” Chomsky told Law&Crime email. “But the Dems would never agree that these are ‘high crimes.’”

The storied American dissident also said that Democratic Party leadership would never think to consider the Trump administration’s alleged human rights abuses along the U.S-Mexico border as impeachment-worthy crimes. Chomsky said that the situation was the “same” regarding Trump’s arguably unlawful use of military force against sovereign nations in the Middle East.

“How could the Dems regard it as ‘high crimes’ to carry out more deportations than any predecessor and a global assassination campaign of unprecedented scale?” Chomsky asked out loud—referencing the immigration and national security apparatuses and policies put into place by former president Barack Obama and taken to their logical extreme by Trump.

“Same as Watergate,” Chomsky explained. “There was an attempt, by Robert Drinan, to include [Richard] Nixon‘s real crimes, like the bombing of Cambodia, in the bill of impeachment, but that was cut out and the focus was on an attack on Democrats, much as today.”

Rev. Drinan was a prominent Jesuit priest, leftist, anti-war activist and Democratic Party representative from Massachusetts who drafted and introduced the original resolution calling for Nixon’s impeachment in the U.S. House of Representatives in 1973. Ultimately frustrated by liberal members of his own party, Drinan’s language regarding Nixon’s secret and unlawful bombing of Cambodia was swapped out for the Watergate charges.

“Can we be silent about this flagrant violation of the Constitution?” Father Drinan asked his liberal colleagues at the time. “Can we impeach a president for concealing a burglary but not for concealing a massive bombing?”

House Democrats answered that question in the affirmative—setting a behavioral precedent and squeamishness with criticizing war-making that has continued to the present day.

“The message appears to be the same: a real crime is attacking the powerful,” Chomsky continued. “It’s okay to murder [Black Panther leader] Fred Hampton (or any number of Cambodians, etc.), or to send children to concentration camps, and all the rest. But not to undermine those with power here.”

Chomsky’s impeachment-focused comments are in keeping with his prior public statements about the Democratic Party’s prior single-minded focus on the ultimately ineffectual Robert Mueller investigation.

“The Democrats invested everything in this issue,” Chomsky said at a forum with progressive radio host Amy Goodman in April of last year. “Well, turned out there was nothing much there. They gave Trump a huge gift. In fact, they may have handed him the next election…That’s a matter of being so unwilling to deal with fundamental issues, that they’re looking for something on the side that will somehow give political success.”