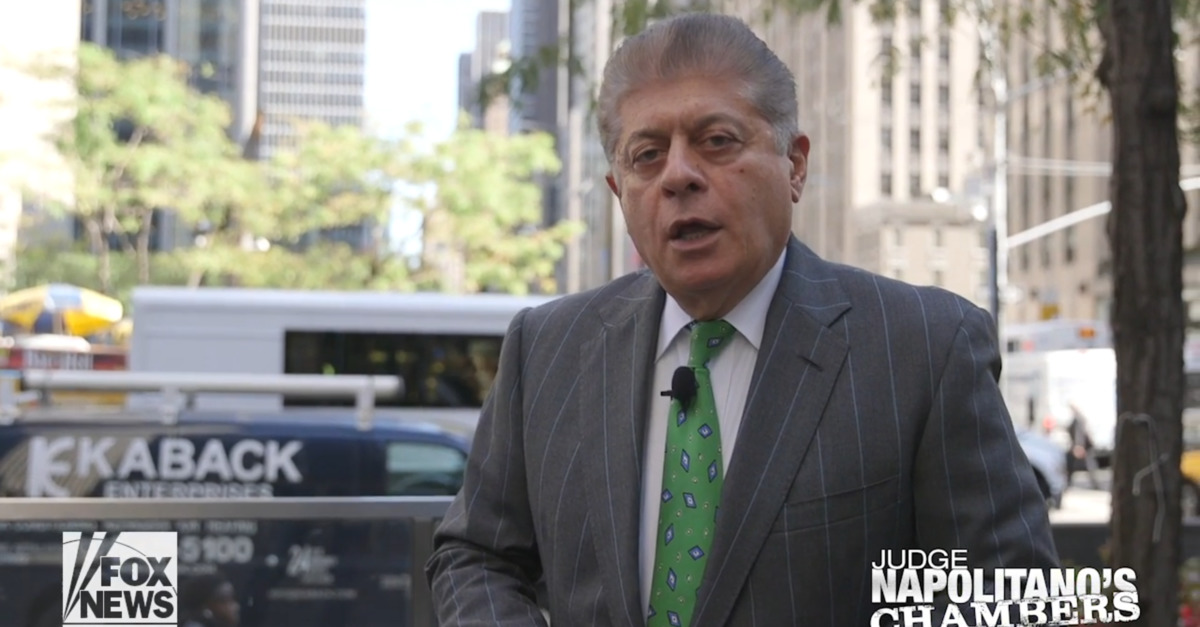 Napolitano previously described Trump’s actions vis-a-vis the Ukraine and the Biden family as “a crime” during a Tuesday segment with Fox News anchor Shepard Smith.

During a brief segment on Napolitano’s own digital web series “Judge Napolitano’s Chambers” the former judge left no doubt as to where he stands on the recently announced impeachment inquiry.

The libertarian-leaning “rare voice of sanity” started off with a capsule summary of the events leading up to Nancy Pelosi‘s Tuesday evening announcement that Democrats would move towards impeachment.

“An employee of the intelligence community has filed a complaint with the Inspector General of that community alleging that the president of the United States may have violated the campaign finance law by asking for a favor for his campaign from the president of Ukraine,” Napolitano notes. “As most people know, it is a felony to ask for, or to receive, to conspire and plan for, to attempt to acquire aid for a presidential campaign from a foreign government or foreign national.”

Then comes the crux of the matter:

Since that allegation, which has been reported upon widely, the president of the United States–who was the subject of the complaint–released a transcript of his conversation with the president of Ukraine and in that conversation he basically says: ‘Why don’t you investigate Joe Biden’s son?’”

Napolitano mimics Ukrainian President Zelensky responding to Trump’s ask with an incredulous, “What?”

“‘Yeah, the former vice president’s son was about to be prosecuted and the prosecutor was thrown off the case and you should look into it and you should talk to my lawyer Rudy Giuliani and our Attorney General Bill Barr,'” Napolitano adds, finishing off his impersonations.

“That’s the essence of the conversation about which the whistleblower filed the complaint,” the former judge continues, “What followed the conversation was orders by President Trump to the State Department not to send $140 million that Congress had authorized in foreign aid to Ukraine and an order to the Treasury Department not to order the release of $250 million in military equipment which have been built in the United States and ready to be shipped to Ukraine.”

And while some commentators have dispensed with their quid pro quo arguments against Trump over the Ukraine phone call, Napolitano is not quite content to let this investigatory angle go.

“Now, why would the president be holding back on this $390 million package unless it was to see if the new president of Ukraine would comply with the president’s wishes?” Napolitano asks rhetorically before clarifying, “And those wishes were that the Ukrainian government would investigate the son of his principal adversary as he seeks re-election. That has caused the Democrats to commence their impeachment investigation.”

The onetime jurist concluded by saying Trump has wandered into “impeachable offense” territory: