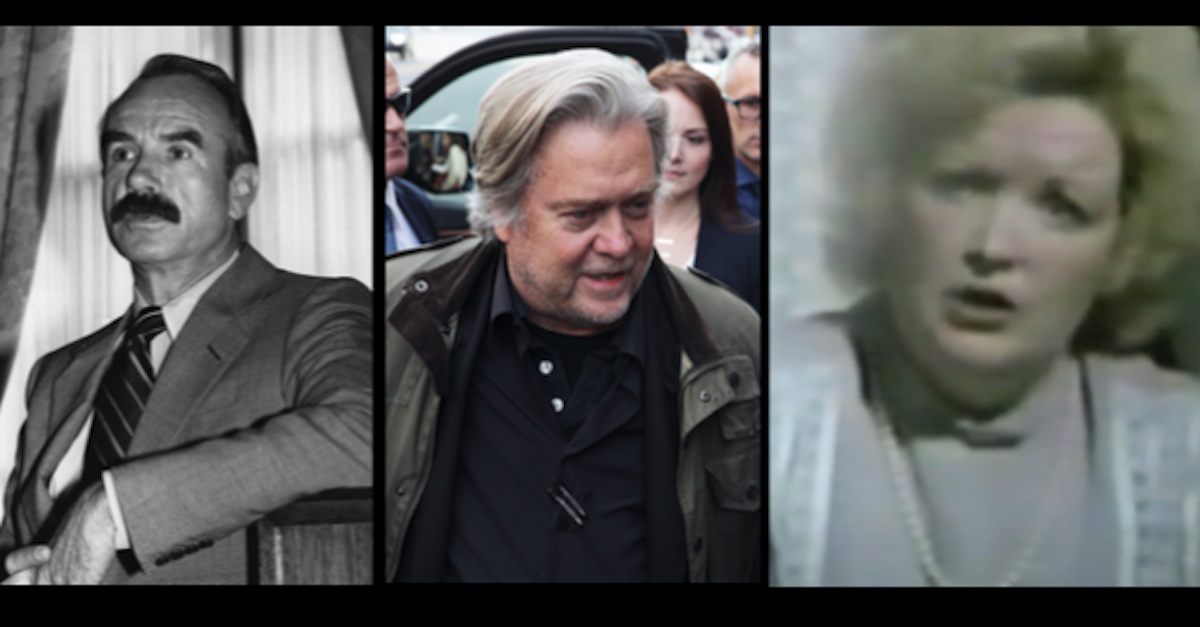 Now that former President Donald Trump’s ex-chief strategist Steve Bannon has been hit with two criminal contempt of Congress charges for refusing to comply with a House subpoena, legal scholars have to turn back decades for relevant precedent.

The indictment was filed Friday, and detailed Bannon’s ongoing defiance of the House Select Committee to Investigate the Jan. 6 Attack, chaired by Rep. Bennie Thompson (D-Miss.).

Although the indictment was not entirely unexpected—the House of Representatives voted in late October to hold Bannon in contempt—an actual conviction would be the first of its kind in almost half a century. The Department of Justice traditionally enjoys wide latitude over whether to convene a grand jury after receiving a contempt referral from Congress, and the vote from the Democratic-controlled House of Representatives hardly made Bannon’s charges inevitable. That a grand jury now has signed off on Bannon’s charges sets the stage for a rare prosecution—said to be the first contempt of Congress case brought after executive privilege was asserted.

In 1974, Watergate mastermind G. Gordon Liddy was found guilty of two counts of contempt of Congress for refusing to answer questions before a House subcommittee. He was given a suspended six-month sentence and one year’s probation, largely because he was already serving time for his role in the burglary of the Democratic National Committee headquarters at the Watergate office building, as the New York Times reported.

The last time someone was even charged with criminal contempt of Congress was almost 30 years ago, when former federal environmental official Rita Lavelle refused to submit to questions about her removal as the head of a toxic waste disposal program at the Environmental Protection Agency.

At the time, the head of the EPA was Anne Gorsuch Burford, mother of Supreme Court Justice Neil Gorsuch. In 1982, Burford became the first federal agency head to ever be held in contempt of Congress, when she refused to provide documents related to the mishandling of the EPA’s Superfund, according to the Washington Post.

At her trial, Lavelle said that she didn’t submit to the congressional subpoena because she was “emotionally and physically drained,” suffering from a sore throat caused by a lump in her throat, and feared she might have cancer, all of which added up to what her lawyer called an “incapacitating illness,” according a New York Times report. She also said the subcommittee that issued the subpoena hadn’t offered to pay her travel expenses from California.

The prosecutor at the time said that Lavelle’s excuses were just “blue smoke and mirrors,” the Times reported.

Although Lavelle escaped conviction on the criminal contempt of Congress charge, she was ultimately found guilty of lying to Congress, and in 1984 was sentenced to six months in prison and a $10,000 fine. (It wasn’t the last time Lavelle would face prison time: in 2004, she was convicted of fraud in connection with her environmental consulting firm, and sentenced to 15 months in federal prison.)

In 2014, a Republican-led House approved a criminal contempt resolution for former IRS official Lois Lerner, who was accused of improperly investigating conservative political groups. Lerner, who had apologized for targeting groups with “tea party” or “patriot” in their names, had refused to testify before the House Oversight Committee about the matter.

Although the House Oversight Committee referred the resolution to the Department of Justice, federal prosecutors declined to pursue the case.

Though NBC has described Bannon’s indictment as the first prosecution brought after an assertion of executive privilege, the Jan. 6 Committee has scoffed that their inquiries about Bannon relate to his actions as a “private citizen and involve a broad range of subjects that are not covered by executive privilege.” These include Bannon’s actions as a podcaster for his show “War Room.”