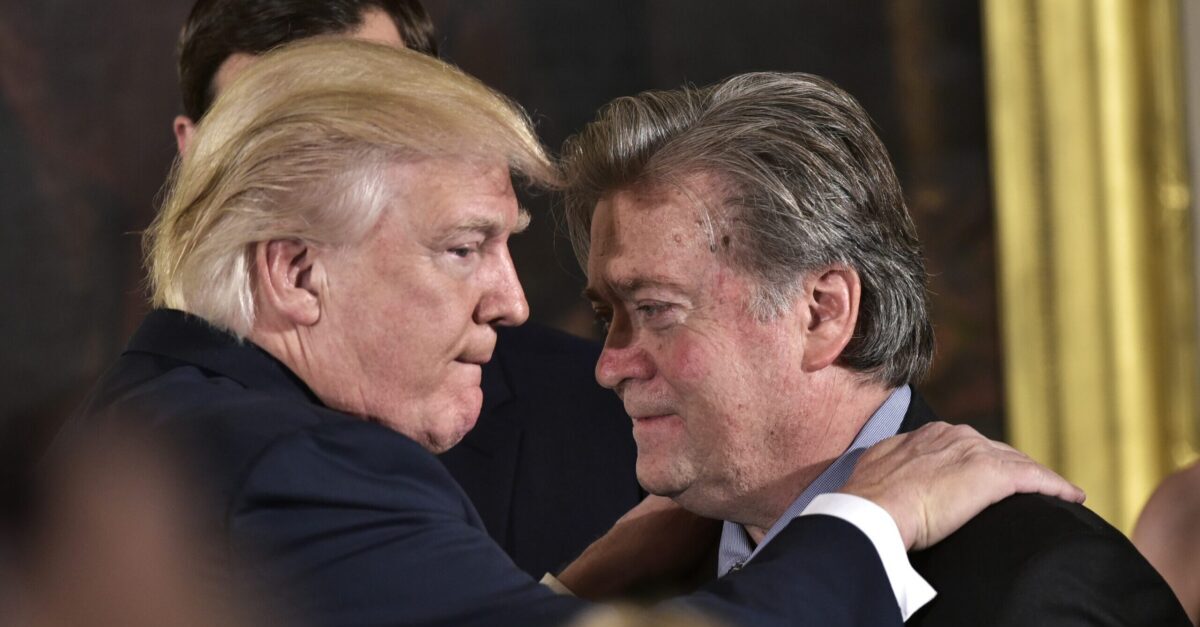 Then-U.S. President Donald Trump (L) congratulates Senior Counselor to the President Stephen Bannon during the swearing-in of senior staff in the East Room of the White House on January 22, 2017 in Washington, D.C. (Image via Mandel Ngan/AFP via Getty Images.)

Steve Bannon, a former chief strategist for the Trump White House, on Friday was indicted for failing to comply with a congressional subpoena issued by the House Select Committee investigating the Jan. 6 breach of the U.S. Capitol. According to the U.S. Department of Justice, Bannon, 67, is charged with one count of contempt “involving his refusal to appear for a deposition.” He faces a second contempt count “involving his refusal to produce documents, despite a subpoena from the House Select Committee to Investigate the January 6 Attack on the U.S. Capitol.”

The charges are filed in U.S. District Court for the District of Columbia. An arraignment date has not yet been set, the DOJ said in a press release.

The indictment document itself almost immediately pointed to Bannon’s status as a “private citizen” for several years leading up to the Jan. 6 siege.

“For approximately seven months in 2017, more than three years before the events of January 6, 2021, BANNON was employed in the Executive Branch of the U.S. Government as the Chief Strategist and Counselor to the President,” the indictment says. “After departing the White House in 2017, BANNON did not work again in any Executive Branch or federal government position.”

According to the indictment, Bannon was subpoenaed to produce documents by October 7, 2021, and to “appear for a deposition before the Select Committee on October 14, 2021.” Bannon’s attorney accepted service of the subpoena on Sept. 24, 2021. The indictment explains further:

The schedule attached to the subpoena identified 17 categories of “documents and communications” that BANNON was required to produce relevant to the Select Committee’s authorized investigation of the January 6th attack on the U.S. Capitol.

The subpoena also included instructions for compliance with the document demand, titled, “DOCUMENT PRODUCTION DEFINITIONS AND INSTRUCTIONS.” The instructions directed that, if BANNON could not comply fully with the subpoena by the return date, he should comply “to the extent possible by that date” and provide an explanation and date certain for full compliance1, that, if BANNON withheld any documents and communications, he should provide a detailed log of which records were withheld and why; and that, upon completion of BANNON’s response to the subpoena, he should provide a written certification that a diligent search had been completed and all responsive documents had been produced.

The document continues by asserting that Bannon “did not appear before the Select Committee, did not produce documents and communications, did not provide a log of withheld records, did not request an extension of time, and did not certify that he had conducted a diligent search for responsive records” by the 10:00 a.m. deadline on Oct. 7. Per the indictment, Bannon’s attorney communicated back to Congress on the evening of Oct. 7 — “seven hours after BANNON had defaulted on the production deadline” — that President Trump had “instructed” Bannon not to cooperate:

The Select Committee Chair pushed back at those assertions with a list of seven complaints — all of which are outlined in the indictment. Among them were that “virtually all the documents and testimony sought by the Subpoena concern Mr. Bannon’s actions as a private citizen and involve a broad range of subjects that are not covered by executive privilege.” Also among them were that Bannon needed to assert specific privileges over specific types of testimony and specific types of documents; he was not allowed, the Committee Chair said, to ignore Congressional requests in wholesale fashion.

Bannon’s attorney responded back that the fight would have to be settled via compromise or via the courts.

“Until such time as you reach an agreement with President Trump or receive a court ruling as to the extent, scope and application of the executive privilege, in order to preserve the claim of executive and other privileges, Mr. Bannon will not be producing documents or testifying,” Bannon’s attorney said (as recapped in the indictment).

Every person who having been summoned as a witness by the authority of either House of Congress to give testimony or to produce papers upon any matter under inquiry before either House, or any joint committee established by a joint or concurrent resolution of the two Houses of Congress, or any committee of either House of Congress, willfully makes default, or who, having appeared, refuses to answer any question pertinent to the question under inquiry, shall be deemed guilty of a misdemeanor, punishable by a fine of not more than $1,000 nor less than $100 and imprisonment in a common jail for not less than one month nor more than twelve months.

“Since my first day in office, I have promised Justice Department employees that together we would show the American people by word and deed that the department adheres to the rule of law, follows the facts and the law and pursues equal justice under the law,” Garland said in the aforementioned DOJ press release. “Today’s charges reflect the department’s steadfast commitment to these principles.”

This report, which began as a breaking news piece, has been updated.