Update, 4:23 p.m.: A second prosecutor, Jonathan Kravis, has filed a motion to withdraw from the case. But he has also resigned as Assistant U.S. Attorney. Read more about his role in the Stone trial here.

A former prosecutor with then-Special Counsel Robert Mueller’s office who was still on the Roger Stone case moved to withdraw from the matter after President Donald Trump criticized the prosecution’s sentencing recommendation and the Department of Justice sided with the president. 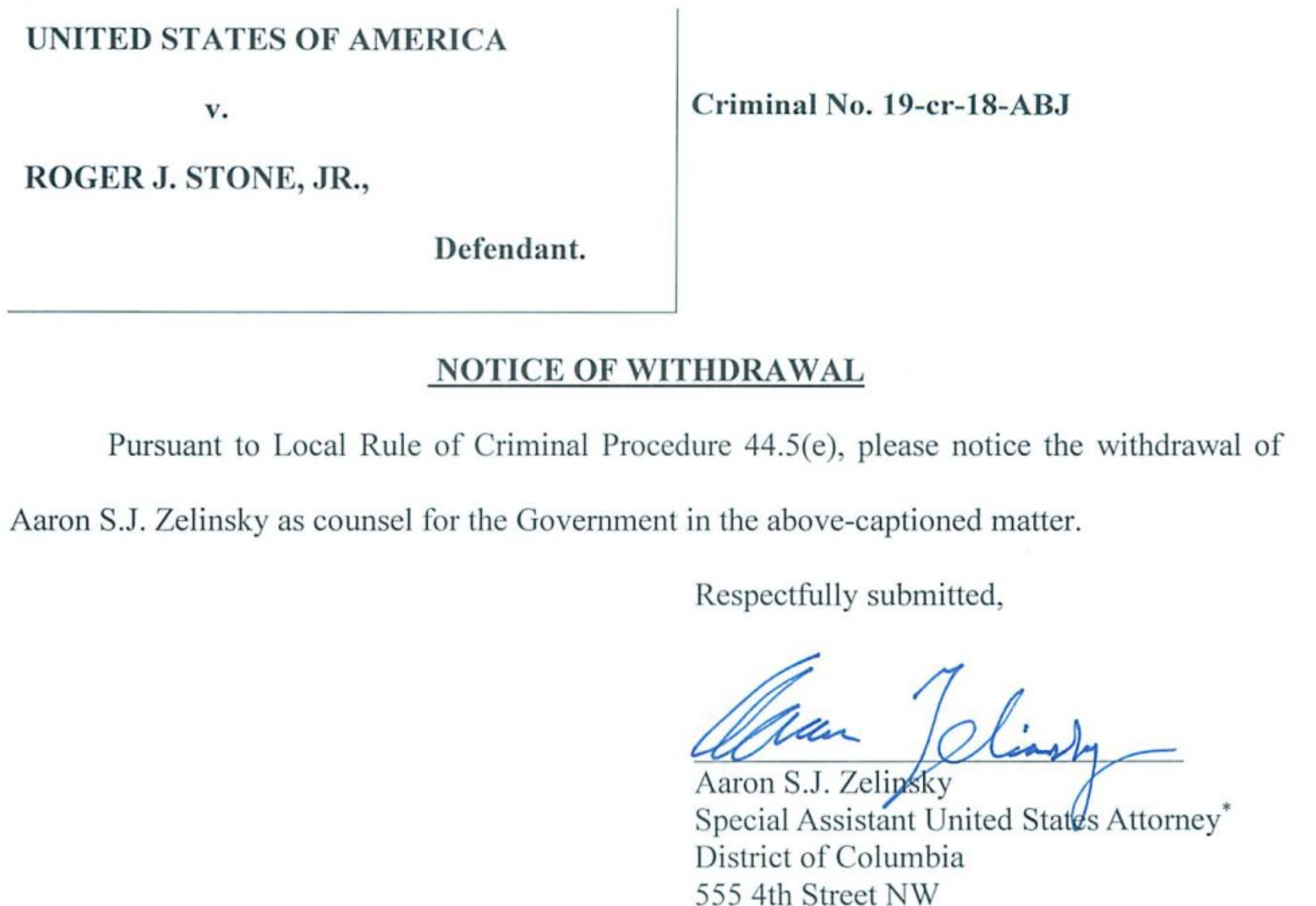 Aaron Zelinsky is out, he told the court on Tuesday.

Federal prosecutors in the District of Columbia on Monday did the math on the totality of Stone’s conduct and concluded that a recommendation of seven to nine years behind bars was the appropriate punishment for lying, witness tampering and obstructing justice. That’s what the guidelines told them, they said.

“Cannot allow this miscarriage of justice!” the president said in part, while hinting at a pardon down the line for his pal.

An unidentified senior DOJ official responded by telling reporters that the recommendation for Stone was “extreme, excessive and grossly disproportionate,” that it was not what was discussed, and that prosecutors would clarify their position.

DOJ claims that the decision to lessen the severity of the sentencing recommendation occurred before Trump went to bat for Stone on Twitter.

It is unheard of for the DOJ to recommend a sentence and then turn around and claim that the sentence is excessive one day later.

Trying to convince the public that this was a mere coincidence, unrelated to Trump’s tweet, insults our intelligence. https://t.co/xI7G7YwjAL

In any event, Zelinsky has moved to withdraw from the case.

Notably, Zelinsky did everything he could during the Stone trial to get witnesses to talk about Stone’s conversations with the president before the 2016 election.

Zelinsky asked cooperating witness and convicted felon Rick Gates what happened after Trump got off the phone with Stone during the summer of 2016.

During his testimony, Gates said he was in a car with then-candidate Trump while the latter was engaged in a phone call with Stone about upcoming WikiLeaks disclosures. According to a substantially-redacted page from the Mueller Report, Gates was in a Suburban with Trump on the way to New York City’s LaGuardia Airport sometime during “the late summer of 2016.”

Gates replied: “He indicated more information would be coming.”

Mueller asked Trump several questions about Trump’s communications with Stone and Stone’s knowledge regarding “forthcoming releases of information” from Wikileaks.

In response to that series of questions, Trump wrote that he didn’t recall discussing WikiLeaks with Stone:

During closing arguments in Nov. 2019, Zelinsky flat out said that Stone lied to protect Trump.

Stone’s trial took a week and a half. He was convicted on all seven criminal counts against him.