Erik Prince Is Accused of Lying to Congress Multiple Times. Is William Barr About to Bury the Case? 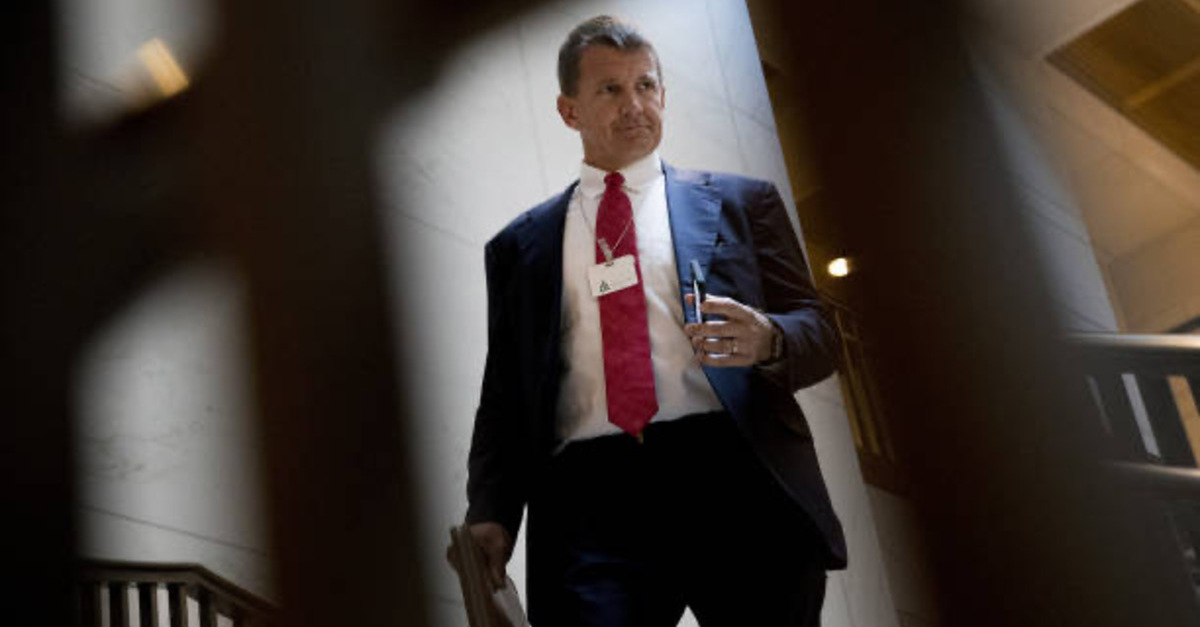 The U.S. Department of Justice (DOJ) is reportedly in the eleventh hour of its decision-making process on whether to charge professional mercenary Erik Prince with the crime of lying to Congress amid the Russia probe in 2017. But critics of the Trump administration don’t expect Attorney General William Barr will show that the ladder of law has no top and bottom when it comes to wealthy and well-connected Prince, a steadfast Trump ally and brother of billionaire Education Secretary Betsy DeVos.

Additional potential charges against Prince could include violations of federal exportation laws over his attempts to sell weapons of mass destruction to the United Arab Emirates. Per the Wall Street Journal:

The investigation gathered steam in recent months with the cooperation of several witnesses, the people said. Potential charges against Mr. Prince, the founder of the defense contractor formerly known as Blackwater, include making false statements to Congress and violating the International Traffic in Arms Regulations, the people said.

It is alleged that Prince provided false testimony to the House Intelligence Committee in 2017 when discussing his meetings with a Russian banker in the Seychelles islands in early 2017. Among other things, Prince is accused of lying directly about the genesis of the meetings by calling them “chance” encounters when he was actually involved in the planning, and by telling congressional investigators he was not acting as a Trump representative when, in fact he was—being briefed and debriefed before and after by Trump’s camp.

Rep. Adam Schiff (D-Calif.) promptly referred Prince to DOJ over those lies once the Democrats won back the House in 2018. Citing  the final Mueller Report, Schiff said, in a press release that Prince’s lies “hindered the Committee’s ability to fully understand and examine foreign efforts to undermine our political process and national security, develop appropriate legislative and policy remedies to counter future malign influence operations targeting campaigns and presidential transitions, and inform the American public.”

false statements hindered the Committee’s ability to fully understand and examine foreign efforts to undermine our political process and national security, develop appropriate legislative and policy remedies to counter future malign influence operations targeting campaigns and presidential transitions, and inform the American publicAs the [Mueller] Report makes clear, evidence obtained by the Special Counsel, including testimony provided to the Special Counsel by both Mr. Prince and Mr. Nader, differs materially from Mr. Prince’s testimony, under oath, before the Committee on November 30, 2017. The Report reveals that Mr. Prince’s testimony before the Committee was replete with manifest and substantial falsehoods that materially impaired the Committee’s investigation.  In particular, Mr. Prince’s testimony about his January 11, 2017 meeting in the Seychelles with Kirill Dmitriev, the chief executive officer of Russia’s sovereign wealth fund, differs from the Report in [several] material respects…

But the case has long languished for unclear reasons. And now that prosecutors are getting into position to get into position to potentially charge Prince, critics of Trump and Barr are largely unconvinced the case will move forward.

One popular liberal podcast whose namesake is derived from the surname of former Russiagate special counsel Robert Mueller put their “Beans on no,” a reference to a carnival-based betting game.

”[A] little context here too: Prince plainly lied,” he wrote. [W]e are really getting upriver here.“

a little context here too: Prince plainly lied. we are really getting upriver here. https://t.co/fts8iTbka2

“DOJ is weighing CRIMINAL charges against [DeVos’] brother Erik Prince for arms trafficking [and] LYING to Congress about his secret #Seychelles meet with a close Putin adviser to establish a secret backchannel with #Russia,” she tweeted. “Until Barr quashes it.”

Whatever DOJ’s ultimate decision, Prince has frequently served as a reoccurring cast member during the Trump presidency.

According to the New York Times, an infamous August 3, 2016 meeting between Donald Trump Jr., convicted pedophile George Nader, Israeli social media expert Joel Zamel and Prince was premised on the idea that two princes–one from Saudi Arabia; one from the United Arab Emirates–were dedicated to helping the elder Trump become the 45th president of the United States.